Didsbury Gin: from bathtub to Harvey Nichols in less than six months

People often talk about Didsbury and Chorlton in the same breath. But Didsbury’s got something Chorlton hasn’t – a gin named after it.

Following hot on the heels of Zymurgorium, Manchester Gin, Faith & Sons, Manchester Three Rivers and the Manchester-inspired gin Thomas Dakin, Alderman’s Didsbury Gin is the new kid on the block.

Taking inspiration from Alderman Fletcher Moss who gifted both Fletcher Moss Botanical Gardens and Parsonage Gardens to the people of Didsbury, Liam Manton and Mark Smallwood have worked with Union Distillers in Market Harborough to create a spirit that has just been launched exclusively with Harvey Nichols nationwide.

As the resident gin lover at I Love Manchester, I popped by to have a chat with them and sample this new gin. Just for research purposes, of course.

So gentlemen, how did it all start?

We can’t remember – we’ve drunk too much gin! We were sitting in a pub over Christmas and we sort of joked that we should make our own – that from that gin, that from that one. Just the things we liked. And then we started to look into it and before we knew it, we were sitting in Grindsmith coming up with a brand, the name, the concept, and knocked together some bathtub gin at home. 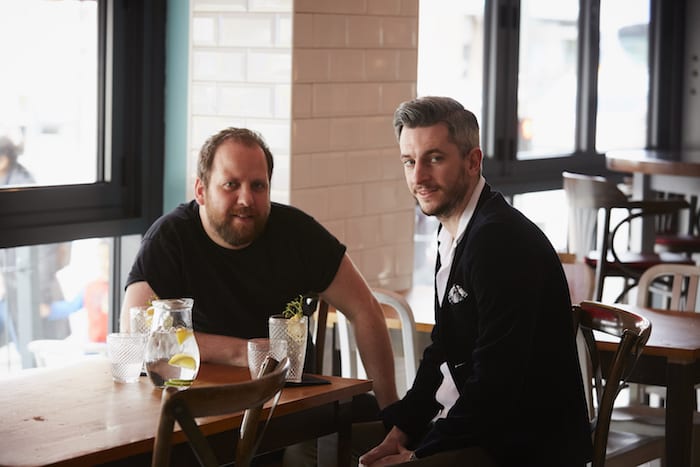 How did you produce it commercially?

We were nearly there, but it wasn’t quite right. So we approached the Gin Foundry, and they gave us a list of four or five professional distillers who would work with us to refine our recipe and help us to produce it at scale. We went down to meet the team at the Union Distillery. They produced the gin to our recipe for us and we just got on with them. They’re a family business, not too large an operation.

How did you select the botanicals? Was it purely on taste?

We didn’t want to reinvent the wheel. You can do a lot of crazy things with gin. As long as juniper is in there, you can put almost whatever you like in there. But we wanted it to be something that we’d drink, something that’s quite smooth, and that’s what we went with.

The perfect serve for Alderman’s Didsbury Gin is with Fever Tree Indian Tonic, a slice of grapefruit and lemon thyme, to bring out the herbal and citrus notes in the gin.

How did you market it?

We had 12 sample bottles produced and held a private event here in Didsbury, invited a couple of bar owners and some local people, and everyone was really positive about it. We had one bottle left, so we ended up arranging a meeting with the buyer from Harvey Nichols. We went to meet him and two of his team in London. We were like Del and Rodney, with a bottle in a brown leather suitcase, a big bag of lemon thyme and a grapefruit.

So we sat down with them and it was like being on a TV talent show. We presented the product to them, they were whispering together, and came back saying that they wanted to launch the product exclusively, nationally. We thought they’d just buy a case for the Manchester store, which might help us with our own trade conversations. We could go into bars and say we were in Harvey Nichols, but they loved it. They were our first customer and it’s now in every store nationally.

Securing them as our first customer has just opened doors for us. They’ve helped us. So the whole process has been really quick – from Christmas Eve to now, when we’ve been trading for three weeks.

And what does Didsbury think of its new gin?