From now until Wednesday evening, take advantage of half price food at this modern Indian restaurant which has won praise from a top national critic
Share
Tweet
Share
Chat

New modern Indian restaurant Delhi House Café, which opened in August, is the latest addition to the culinary offering at Manchester’s Corn Exchange.

The family-run restaurant has had rave reviews since opening, including a glowing write-up from The Observer food writer Jay Rayner.

The national critic praised the “verve and enthusiasm” of the new opening, as well as “some of the best trained, and most cheery staff I have come across in a long while”.

The restaurant has been quickly gathering word of mouth praise from locals, too. 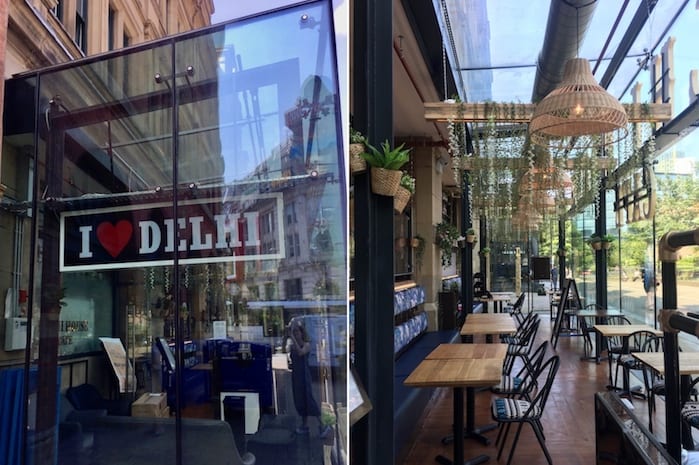 Sadly, Delhi House Cafe will soon have to close again, in line with the national lockdown measures later this week.

But now’s the perfect chance to get in and try it before they temporarily close their doors – especially as they’re offering 50% off food.

That’s right – from now until close of play on Wednesday, diners will be able to take advantage of half price food, up to the value of £10 per person.

Open all day, Delhi House Café key dishes include a dish named ‘not my burger’, which is an open burger of homemade beef kebabs served on a hand-made tandoori naan with salad and chips, and also the Mysore Pak cheesecake, which has its origin from Mysore in India.

The drinks menu includes a selection of options sourced from India to perfectly complement the cuisine, with syrups such as sandalwood made on-site.

And there are full safety measures in place, including thorough cleaning procedures, sanitised menus and social distancing throughout.

With a lifetime of experience in culinary creation, restaurant success in India and a creative vision, the Lamba family chose Manchester as the home for Delhi house Cafe – their first opening in the UK.

Working with a head chef they pinched from the five-star Dorchester hotel in London, the family’s new cafe-meets-restaurant has brought something completely new to Manchester.

So if you‘ve not tried it yet, now’s your chance – but you’d better be quick.

Delhi House Cafe in the Corn Exchange is offering 50% off food up to the value of £10 per person from now until Wednesday evening.