Tales from the City: meet Davinia Hamilton-Maddox, owner of a successful pet talent agency based at MediaCity 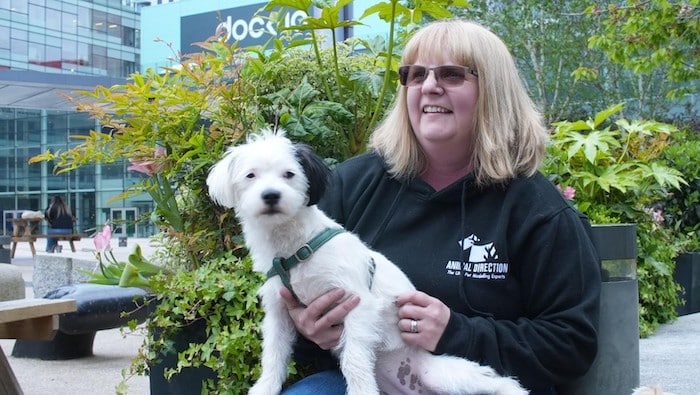 They say to never work with children or animals, but Davinia Hamilton-Maddox often finds herself working with both. She is the founder of Animal Direction, an agency which provides animal models of all shapes, sizes, breeds and varieties for various media.

Her portfolio of pets can be found in advertising and promotional productions for television, online, PR, fashion shoots or at events. Animal Direction has been based at MediaCity for the past 6 years, sourcing, casting, handling and caring for animals that appear on our screens and in glossy magazines.

It originally started as a sideline business. “I used to work in a creative advertising agency with a big pet client,” Davinia tells us. “At the time there were only a handful of pet casting agencies and they were all based in London. But we only had a Manchester budget.

“I didn’t feel the warmth coming from them that animals need, so we decided to do it ourselves. We gathered together a group of family and friends and they all brought their pets for a photo shoot at Southport beach. It went so well I thought ‘do you know what? I might do this full time’ and that was it.”

Davinia founded the company in 2012 with the help of a friend who was a dog trainer using her marketing and business background to design the logo and the website and cast the best animals to meet a wide assortment of briefs.

“Animal ethics are at the heart of everything we do,” Davinia tells us, and animal welfare weaves into everything that Animal Direction stands for. Davinia’s love for all animals means she will turn down any job if she thinks it’s not safe or respectful in any way.

Animal Direction also provides a vet service, Vets on Set so they can comply with broadcasting rules which state that a qualified Veterinarian or Registered Veterinary Nurse must be present during the filming of animals for a commercial production

Animal Direction moved to MediaCity six years ago and her work takes her all over the country. “We have seen the demand for animal actors grow as MediaCity becomes home to many different production companies. We are a specialist service and being based at MediaCity is crucial to our business, I can’t imagine us being anywhere else.” says Davinia. ‘“We have now become the go-to animal model agency for producers who have a role to fill.”

But it’s not just dogs, Davinia and her team works with all sorts of animals including horses, rabbits and reptiles. “Each job is so different. You can train cats and bunnies if you have the time,” she admits.

Although animals have their own personalities, it’s true that certain breeds have their own typical traits. “Labradors are brilliant for pet food ads as they’re always hungry.” she laughs, “while dalmatians can be a little skittish, but are great for fashion shoots.”

Animal Direction invites responsible pet owners who thinks they have a handsome hound or a pet with star quality to register their pets for possible future assignments via their website. “Most of our recruitment is done online,” says Davinia. “Owners fill in a form and tell us all about their personality. We review every single one.”

“The highlight of my day is looking through the photos of the animals that have been registered on our website.  We don’t charge owners to register their pet, but we do a lot of due diligence for every brief to make sure we have the right animal for the job.

“When we receive an enquiry from a producer the process of searching for models and casting takes a long time. We have to understand the storyboard and make sure that the animal we select can deliver the best results on the day. Casting an animal is just a small part of the producer’s role so we project manage the process so that they can get on with the rest of the production.”

What sort of thing is she looking for? “We want well behaved animals that are confident and interested in their surroundings but not necessarily those that can perform tricks,” she adds. “The most important command is that they know how to sit and stay really and that they’re happy doing that.

“If they are nervous, easily stressed or unsure of new places then they’re probably not the right candidate for this sort of work.”

As you can imagine, Davinia has had some interesting experiences over the past decade. There was the time a golden retriever became a golden reliever and did a wee up one director’s leg. Then there was a very high-profile photoshoot with a cat and Jerry Hall for the cover of Vogue magazine.

The most fun she ever had was on a three-day shoot for Harrington’s dog food featuring 25 dogs while a drone filmed from above. “That one took a lot of planning,” Davinia admits. “but we had great weather and the dogs had an amazing time but it was hard work for the owners who were up and down that hill a fair few times until the director was happy!”

There’s also an upcoming opportunity for proud pet owners to meet Davinia and the Animal Direction team as they will be hosting a Weekend Woofers Dog Show at the upcoming We Invented The Weekend Festival at Media City on Saturday 10th Sept: 11am – 12.30pm and Sunday 11th Sept: 12.30 – 1.30pm.

Does your dog have the waggiest tail? From pups to old dogs with new tricks, get stuck in with their weekend Dog Show with plenty of opportunities for your four-legged friend to win a prize over the festival weekend at The Lowry Plaza. Categories include: Most handsome boy, Prettiest girl, Waggiest tail, Best trick, Best catch, Best puppy, Gorgeous golden oldie, Best fancy dress, and Dogs that look like their owners.