Danny Boyle on Manchester, working with Richard Curtis, and why his new film Yesterday is timely

Yesterday is a joyous romantic comedy written by the master of the genre, Richard Curtis, and directed by Danny Boyle.

It might seem unexpected for Danny, who brought us the likes of Shallow Grave, Trainspotting and Slumdog Millionaire, to collaborate with the man who crafted Four Weddings And A Funeral and Notting Hill, but Boyle himself doesn’t think it so strange.

“Richard and I worked together on the Olympics opening ceremony in 2012 and I’ve always loved his work. I regard Blackadder as one of the great pinnacles of British comedy,” says the Radcliffe-born director.

“I think people assume we come from different sensibilities but actually there’s more that connects us than you think.

“A devotion to music and British pop music is something that runs through both our work, all the way through, we’re a very similar age and we got on very well together, so it was a real pleasure to do it.” 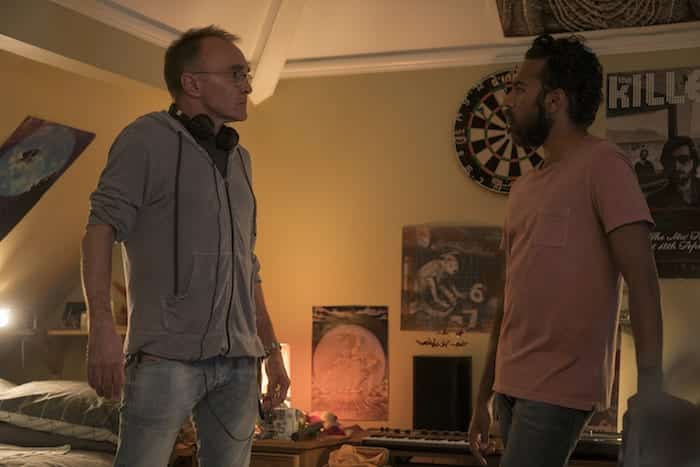 The 62-year-old lives in London these days, but often returns to his home city.

“I’m involved with various initiatives at HOME to try and give back some of what I’ve benefitted from,” says Danny, who was in Manchester for an early screening of the film when we spoke.

“With a film like this, you want people to see it because you worked so long on it – far too long as it happens – you always work far too long on them, so it’s a relief to get it out to the people so they can make their own minds up about it.

“That’s a very important part of the process where you learn to hand over the film to its real destination – the audience.

“Some of them [the movies] people remember and some of them they don’t, and you don’t know that until you go through the process of handing it over.”

Loosely based on the stratospheric success of Ed Sheeran (who makes a cameo in the film alongside James Corden), Yesterday imagines a world where a singer-songwriter called Jack Malik (Himesh Patel) wakes from an accident to discover he’s the only person in the world who remembers The Beatles songs.

He swiftly becomes one of the biggest stars on the planet, but when he risks losing his best friend Ellie (Lily James), he realises there’s only one thing you need in life.

“It’s typical of the sense of humour of The Beatles that when everyone else is doing biopics of groups and life stories of musicians that they should sanction a film about them that sees them erased from history,” says Boyle, who’s received “very touching” messages from Ringo Starr and Olivia Harrison, George’s widow.

He doesn’t think Paul McCartney has seen it yet, “but he saw the trailer and liked it”.

“We asked him whether we could use Yesterday as the title as a courtesy as it’s the title of his most famous song in a way,” says Boyle.

“He was very funny and said the original title of the song was Scrambled Eggs because he dreamt the tune and then came down to breakfast and sang it using the breakfast menu to illustrate it.

“He said, ‘If your film’s a bit of a mess it might be better to be called Scrambled Eggs’. We said, ‘We think it’s a bit better than that, please let us call it Yesterday’ and he did.”

Although Richard Curtis was keen to get Danny on board, the Oscar-winning director asked to do an audition of sorts.

“I’m a big believer in it,” says the filmmaker, who stepped down from directing the new Bond movie over creative differences.

“I think you go in and say what you’re going to do and try and describe as vividly as you can how you see your film and then if you disagree you know early on and you should separate.

“Because there’s so much money spent on films whether they’re big-or low budget, that it’s a crime to go into things willingly delusional about what you’re hoping for.

“And you can see that happens all the time in the movie industry. So yeah, I sort of auditioned to tell him what I’d do with the script and I also asked him to do some work on the script which he duly did, so it was a good result really.”

That’s not to say the shoot was easy.

“No, it wasn’t easy. You read the script and go, ‘Oh The Beatles, Let It Be, Hey Jude, this is great’ but we’re not the fictional audience in the film who have never heard of The Beatles. We do know of them; we do know those songs to a degree so asking someone to perform 17 of them is actually very difficult.

“I began to realise that as we auditioned people and it was just beginning to form as a worry, a growing concern, when Himesh Patel walked in. He hadn’t really done a film, never been a singer-songwriter. He’d learned the piano because his mum had made him and learnt a bit of the guitar as a rebellion against him mum.

“He came in and the songs were born anew with him. It’s like he owned the songs, like they were his, and that was a beautiful thing and we cast him straightaway. But it could have been terrifying, and a very different film [otherwise].”

The film is already getting rave reviews, and its uplifting quality feels like a timely tonic for audiences.

“People feel a great unease. There’s a lot of division among people it seems, for obvious reasons, and people reach for music at times like this. Our film isn’t a musical but there’s a lot of music in it – and wonderful music as well – so reaching for that is understandable,” says Danny.

“But also, there’s such an explosion of long-form television at the moment that people want a big, special reason to go to the cinema and this kind of catalogue of music, these Beatles songs, within a delicious premise like this is a lovely way of giving people that.”

Once he’s finished promoting the movie, Danny’s planning to take a well-earned break before embarking on his next project. But wherever that may take him in the world, Manchester will always be home.

“You always feel like you belong to where you come from in so many ways and certainly, the pop culture that the Beatles gave birth to, the way it manifested itself in the north west, has always been a big inspiration to me in my work, so I feel very connected still,” says the director, who feels there’s a buzz in the city again.

Yesterday is released in cinemas across Manchester on Friday 28th June.