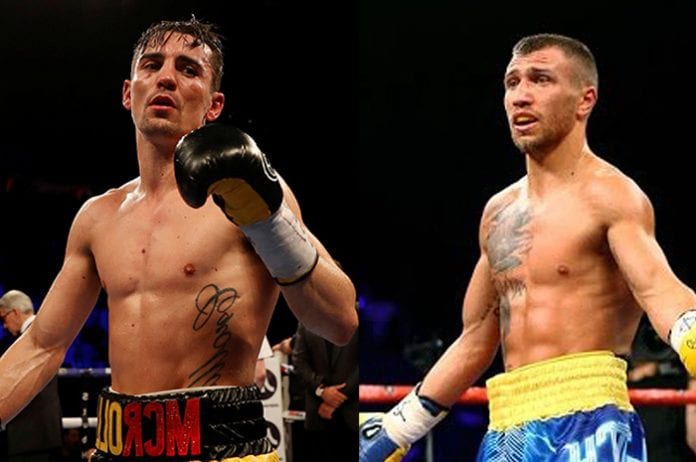 Thirteen years after making his professional debut at the Manchester Evening News Arena, Anthony ‘Million Dollar’ Crolla is to make his boxing debut in America.

He’ll be challenging Ukrainian Vasyl Lomachenko for his WBA world title at the Staples Centre in Los Angeles on 12th April.

The 32-year-old from north Manchester will be the underdog in a fight that Twitter trolls have dubbed ‘a waste of time’.

The history books point to this being possibly one of the toughest fights of Crolla’s career. He lost his world title to Jorge Linares in 2016 and was outpointed again in their rematch in 2017. Lomachenko stopping the Venezuelan in the tenth round when the pair met last year.

In typical fashion, the Mancunian fighter is undeterred by what the history books or what the keyboard warriors of the internet have to say and promises a career-best performance to prove all of the doubters wrong.

“Lomachenko is very versatile but does things wrong and gets away with it as he’s that good,” added Crolla.

“He’s also very hard to read so it’s hard to get the sparring partners in to fight like him. As good as he is, I know I’m in for a tough night and it will take a career-best performance by some way.”

I started getting punched on the nose for nights like this 23 years ago. I’m not an idiot and I know this is a huge challenge but April 12th I’m gonna be in the best shape both physically and mentally and going to LA to shock the world!!! I can’t wait to do it 👊🏼 https://t.co/Nu1ljUD2o1

Richard Commey was initially supposed to fight Lomachenko but the Ghanaian had to withdraw from the bout due to a hand injury which allowed Crolla the opportunity to step in and take the fight.

Keeping in good shape and training smartly between fights are what has allowed Crolla to be able to take advantage of the opportunity. He feels he deserves this chance and has earned it with three wins on the bounce since the losses to Linares.

“I believe that I can win a world title again and these are the kind of fights that I’m in it for.

“This is the biggest fight that can be made out there for me. I’ve earned it, it’s not like I’ve been given this shot. Since losing my title to Linares, I’ve come back and had three solid wins”.

Whatever happens in April, Crolla can certainly be proud of everything he has accomplished in the sport, especially considering he could have been forced to retire back in 2014 when he suffered a fractured skull and a broken ankle when confronting intruders in a neighbour’s home.

And if there is one trait that sums up a Mancunian fighter, it’s the fact they don’t care about being an underdog or even a favourite. They just want to get in there and put on a great fight.

Tyson Fury, who returned to the ring following personal problems which saw him sidelined from the sport, fought a hard-earned draw with undefeated Deontay Wilder – a fight he could have won had it not been for a knockdown in the last round.

Retired UFC fighter Michael Bisping had a reputation throughout his career of fighting anybody even at short notice.  Following a defeat to George Saint Pierre in November 2017, he was back in action two weeks later following another fighter dropping out of the next fight card.

Crolla is no different and he certainly doesn’t care about whether he is the underdog or not in this fight. He would have got just as much stick from the Twitter trolls had he not taken the fight and opted for a ‘safer’ option instead.

“I am a huge underdog and that’s fuel to the fire for me,” Crolla added. “On social media, you get the internet warriors, the trolls. Does that get to me? Not at all, I look forward to proving those people wrong.

“No one is invincible, are they?”