Corrie spoilers: who falls victim in the factory collapse? 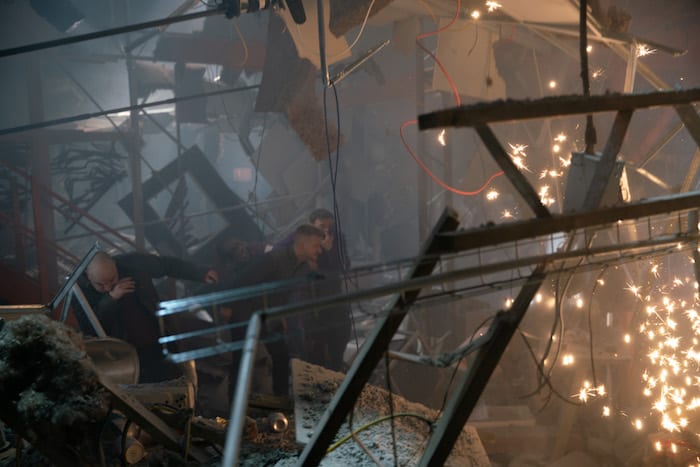 One of Coronation Street‘s most dramatic ever storylines is about to unfold, when the Underworld knicker factory roof collapses – while scores of workers are still inside.

Corrie bosses have today revealed further details of the traumatic TV scenes ahead – and have confirmed that one character WILL lose their life in the aftermath of the collapse.

In next week’s episodes, the bitter recriminations will start as fingers begin to point as to who was to blame for the disaster.

Factory boss Carla Connor will see her world come tumbling down as one Corrie resident lies dead and buried beneath the rubble – after viewers see a shadowy figure sabotaging the factory roof.

The dramatic scenes were one of Corrie‘s biggest ever stunts – taking 21 days to film here in Manchester, with a cast and crew of 70-80 people every day.

However, soap bosses took the decision NOT to damage the structural integrity of the exterior of Underworld on the Corrie set in Trafford. What viewers will see is a combination of scenic works, set dressing and CGI to give the illusion that the roof has caved.

In next week’s gripping episodes, soap fans will see emotional and financial pressures mounting for Carla, who drops her guard admitting to Peter that she still loves him and begging him not to leave, while revealing to Nick that her plans to outsource the factory stem from the fact she’s in financial trouble and can’t afford to fund the roof repairs to keep the building open.

She lays her heart on the line for Peter, but when an emotionally exhausted Carla returns to the street her world is further rocked when she finds Underworld in a state of collapse and her staff and friends trapped under the fallen roof.

As survivors are pulled from the debris, could Carla have blood on her hands or is someone else to blame for the loss of life?

As the residents look for someone to blame, health and safety inspector Wayne, who years ago was fostered by Roy and Hayley, arrives on the street to investigate.

Here’s more on all the characters trapped in the factory – but who will perish and who will survive?

And who will eventually be unmasked as who was to blame?

Sisters Sally and Gina find themselves in grave danger when the roof collapses. Having climbed onto the scaffolding on top of the factory to hang their banners in protest at Carla’s plans to outsource production, the pair get into an almighty row.

As months of tensions come spilling out, suddenly the roof gives way. It’s Sally who falls first, screaming as she disappears from sight under a cloud of rubble.

Could the feud between the sisters have cost one of them their life?

Underworld should have been empty on the day of the disaster but the factory staff, joined by Gemma Winter and Emma Brooker, have barricaded themselves into the building to demonstrate against Carla’s new business model which will see them lose their jobs.

In a horrifying twist of fate, it’s this protest that sees them left fighting for their lives not just their jobs. When the roof caves in the group are left buried under the rubble. Who will get out alive?

Tim Metcalfe, Abi Franklin and Tyrone Dobbs are the first on the scene following the accident and with the emergency services still on the way find they themselves rushing into the building to help rescue survivors. Tim is desperate to get to wife Sally, while Abi and Tyrone frantically try to reach those who are still trapped.

But as the debris continues to fall and the last section of the roof suddenly collapses, it looks like more people could now be in danger.

In the eyes of the residents Carla is public enemy number one. With her plans to outsource the factory exposed, there are those who believe she deliberately wanted to force the premises to be shutdown.

Others are left wondering if her desire to chase profits led her to ignore the warning signs of a damaged roof, putting off repairs and placing her staff at risk. Viewers know she asked Gary to ignore the need for a full repair and patch up the roof as cheaply as possible.

Does this make Carla the prime suspect? As she starts to unravel, her guilt lying heavy, she’s certainly a key suspect in the eyes of the law as she’s quickly brought in for questioning. Will Carla lie to the police about what she knew about the state of the roof or will she crumble under the pressure and confess all?

Having discovered Carla’s plans to outsource production at Underworld and cut him out of the business, Nick was fuming. Nick’s had his eye off the ball while focussing on the barbers but as he desperately tries to keep the fact he embezzled the funds from Audrey a secret, it looks like his deception could be coming home to roost.

Accomplice Natalie’s causing trouble and David’s getting edgy. Needing more money to keep a blackmailing Natalie off his back, Nick tells David he’d be better off if the business went up in smoke. Expecting the factory to have been empty on the day of the collapse, could an ever darker Nick have attempted an insurance job to free up his cash? He stole from his own Gran – what is Nick really capable of?

Peter and Carla cause fireworks, can’t live with each other but can’t live without each other. Both know this but try as they might to move on the chemistry between them keeps drawing them back together.

Peter had a blossoming relationship with Abi and a new adventure planned setting sail on his boat, but as his departure date arrives a vulnerable Carla realises she can’t let go. Peter was humiliated when she publicly shunned him at the factory, leaving in a cloud of resentment, angry at being blamed for saddling Carla with Nick as a partner.

Blighted by the rejection of the woman he was prepared to give it all up for did Peter lash out before Carla came after him? Angrily damaging her beloved factory to hurt Carla the way she hurt him?

Robert finally thought he had it all; a successful business, the woman of his dreams and a baby on the way. But when Michelle ended their relationship, over her realisation that she doesn’t want another baby, Robert blamed Carla for her interference.

As far as Robert’s concerned it was Carla that planted the seed of doubt in Michelle’s mind about their future then helped it to grow. After barging into Carla on the street and telling her to watch out Robert has made no attempt to hide the fact that he’s out to get Carla for meddling in his relationship.

When viewers see a brick go through Carla’s car window and Robert lurking nearby, they’ll start to wonder if Robert’s thirst for revenge led him to tampering with the factory roof?

With a struggling business and a family to support, Gary was pleased when Carla offered him the job repairing the factory roof but he may look back on it at as a poisoned chalice. Having checked over the property following the boat fire and a subsequent leak, Gary advised Carla to replace the whole structure.

But Gary found himself in a difficult position when Carla insisted he fix it as cheaply as possible. Desperate not to lose the work, and with Seb needling him at every opportunity, Gary cut corners in order to get the job done. Could Gary’s patch up job be to blame for the accident that cost someone their life?

Seb’s feud with Gary shows no signs of letting up after Seb’s clumsy pass at Gary’s girlfriend Sarah and their subsequent fallout saw Seb lose his job.

With his life in tatters after the loss of his brother and sister, the breakdown of his relationship with mum Abi and now a bust up girlfriend Faye, Seb is a path to self destruct, firmly laying the blame at Gary’s door.

On the outside it looks to Seb like Gary’s got it all and while he flashes the cash with Sarah in the Rovers, gloating about the work he’s got coming his way, a brooding Seb vows to teach Gary a lesson.

Could a vengeful Seb have tampered with Gary’s roof repairs at the factory in a bid to ruin Gary like he feels he ruined him?