Corrie spoilers: love drama for Mary and Tyrone and will Amy tell the police the truth? 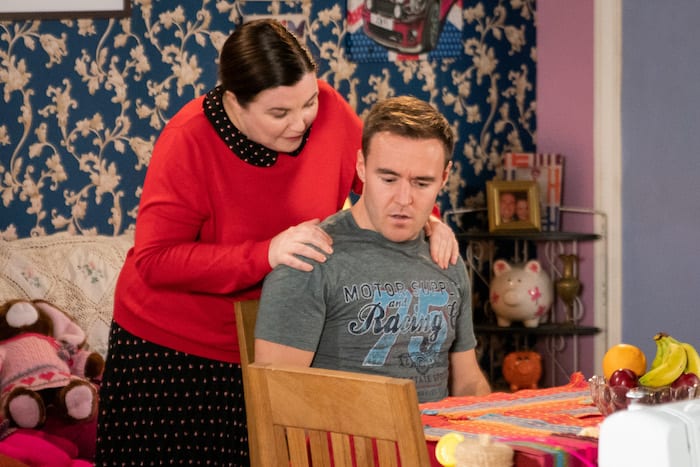 There’s more trouble brewing in the week ahead for the residents of Manchester’s most famous street.

Coronation Street fans will be keen to see how pregnant teenager Amy Barlow reacts to the police’s questioning over Tyler this week – and what she will ultimately chose to do about her unborn child.

Meanwhile mystery still surrounds the boat fire and exactly what Carla has been up to – will she finally come a cropper?

Viewers will also need to make sure to make a note of the slight schedule changes this week for the soap – there will only be one episode on Wednesday as the Brit Awards will be shown live on ITV. On Friday night it will be an hour-long Corrie special from 7.30pm to 8.30pm, with Vera following directly after.

Here’s your episode-by-episode guide to the week ahead.

Tracy gets tough – and the police question Amy

The drama surrounding teen Amy Barlow’s pregnancy continues to grow this week.  And in Monday’s episode we will see her angry mum Tracy try to take matters into her own hands.

She vows that she is not going to let Tyler and his mum ruin her and Steve’s adoption plans of Amy’s baby. But Robert refuses to sack him from the Bistro, so Tracy pins Tyler against a wall and offers him £5000 to have nothing more to do with Amy or the baby but is thwarted when Robert interrupts and orders him back to work. What will she do?

Later we will see Amy questioned by the police and despite her protestations that it was consensual sex and Tyler did nothing wrong, the officer explains to her that as she was underage it is still an offence and she has to give a statement. Amy is furious with Tracy and Steve and runs off at the police station. In Victoria Gardens Tyler apologises to her but says he wants nothing to do with the baby. Unsure of what to do, Amy confides in Bethany.

Carla has a bad day

The police also pay a visit to Carla – as they continue to investigate the fire on Peter’s boat.

They ask her about the fire and she says she was in town at the time and the CCTV has a technical glitch which sometimes deletes footage.

Later, Peter tells Carla that the police have declared the boat fire an accident but he remains unconvinced. Seb tells Peter he saw Carla acting shiftily and putting a bin bag in the boot of her car the morning after the fire.

Convinced Carla is hiding something, Roy quizzes her but she says it was a bag of Underworld seconds for a charity shop.

Tyrone and Mary – what’s the score?

After Tyrone received a mystery Valentine’s Card and believed it to be from Mary he broached the subject with her when she offered to give him a massage.  But it appears he may have got the wrong end of the stick.  In Wednesday night’s episode he’s left trying to make amends.

Tyrone and Ruby call in to the flower shop and invite Mary round to their house for tea saying they have missed her. Mary agrees and they decide to put it all behind them.

Gina’s lies catch up with her

Gina starts a collection for Sally’s party and is thrilled when Carla makes a generous donation. She pushes the envelope through the letter box at no 13 for Sophie but Kevin finds it and thinks it is money from Sophie for Jack’s holiday. Delighted, they pack their bags and leave.

Gina discovers Sophie never found the envelope and the cash has vanished. Gina and Sophie break the news that the party is off as the money has disappeared. Everyone suspects Gina, and Beth tells her to find somewhere else to stay.

Sophie reluctantly lets her stay at No. 13 till Kevin returns.

Hearing how upset Shona is, Billy asks Paul to keep his ear to the ground for any info on her jailbird son Clayton.

Paul reveals that Clayton is being let out for Dane’s funeral. Billy suggest Shona goes so she can see how he is. When Shona admits that she’s planning to attend Dane’s funeral in the hope of seeing Clayton, David is supportive – but implores her to be careful.