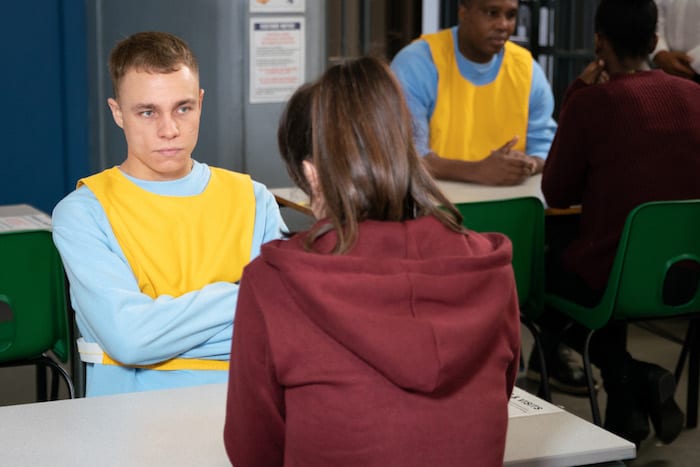 Prepare for another dramatic week ahead on Coronation Street – with the return of killer Clayton Hibbs for a start.

Viewers will recall that Clayton is currently in prison after he murdered David Platt’s wife Kylie on the cobbles.

But in scenes yet to be seen, Clayton’s mum – and David’s new love – Shona will be seen visiting him in prison with some bad news which will set into motion some huge storylines ahead on the soap this spring.

Here’s your episode-by-episode guide to what’s happening next week on Corrie.

It appears Paul is back to old tricks. This week he steals Roy’s mum’s diamond ring from the box and pockets it. When Roy comes to see Billy to find out if he accidentally put his mother’s valuable ring in the jumble bag, Gemma is suspicious.

She confronts Paul but he has already sold it to market trader ‘Big Garth’ for £200. When Gemma points out it was worth £3k, Paul heads off to the market with Gemma running after him. Paul warns Gemma that if she grasses him up to Roy he will tell Chesney about her past. At the market stall, Garth refuses to hand over the ring so Gemma and Paul break into his van to try and find it and end up locked in the back.

Abi boards the ship of dreams

Abi tells an incredulous Sally and Tracy that she is going to go sailing with Peter. Tracy warns Peter not to lead Abi up the garden path and let her down gently.

Later Peter tells Abi that he is not looking for a sailing companion, but ever hopeful Abi tells Sally that with Peter not due to set sail for three months she is sure she can change his mind.

A notorious Corrie character makes his return this week – killer Clayton Hibbs, who viewers last saw jailed for the murder of Kylie Platt.

His mum Shona visits Clayton in prison to tell him his dad Dane has died from an overdose. She realises he already knew and he says he is being bullied and wants her help to get him moved to an open prison.

How will David react when she tells him Clayton needs her help?

Nick and David in the doghouse

Nick and David are looking to hire some “totty” for customers to ogle at in the salon – but when Shona and Bethany hear this they are less than impressed, and vow to get their revenge.

David and Nick later conduct interviews with a set of gorgeous girls but are taken aback when one of the applicants Andrea turns out to be an Italian man. Shona and Leanne are furious with their misogynistic behaviour and insist they reconsider and employ Andrea.

Will the course of true love finally run smooth for Chesney and Gemma?

After some misunderstandings earlier in the week, Chesney and Gemma finally get the chance for a bit of romance.

Chesney gets a babysitter so he can keep Gemma company on her shift.  With Jenny and Johnny away, Gemma asks Emma to take over the bar while she and Ches have some “alone time” in the cellar.

Shona is shocked by Clayton

Shona enlists lawyer Imran’s help to look at Clayton’s request for a move but he doesn’t hold out much hope. Meanwhile, Nick is furious with Shona and tells her that she has no regard for David’s feelings. David is angry with Nick for interfering. When Shona tells Clayton that a move is unlikely he shocks her with his response.

David later explains to Nick that he is not angry with Shona – he is angry with himself that he can’t help her. Nick apologises to Shona.