Corrie spoilers: Amy Barlow is pregnant but who’s the daddy? 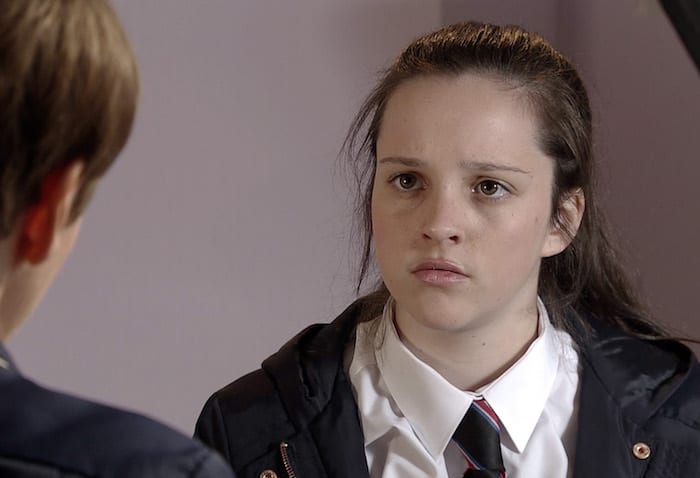 Coronation Street fans can expect one of the soap’s most dramatic storylines in the week ahead when it is revealed that 14-year-old Amy Barlow is pregnant.

Soap fans have seen Amy acting suspiciously in recent episodes. From Monday night’s episodes we will find out why.  The shock news will keep viewers glued over the week before a big reveal on Friday night.

Here is the timeline of how the Amy drama will unfold over the coming week, as well as what will be happening elsewhere on the Corrie cobbles.

Amy bunks off school and attends a family planning clinic, explaining to the nurse she’s pregnant and needs the abortion pill.

But when the nurse insists she must discuss her situation with an adult first, Amy leaves upset. As Tracy gets a call from school to say Amy is missing, Amy texts Liz and asks to meet in the urban garden where she drops the bombshell that she’s pregnant and needs Liz to accompany her for an abortion. How will Liz react?

Sinead bonds with her baby

Meanwhile back at the hospital, new mum Sinead reaches into the incubator and tentatively touches baby Bertie but when his ECG alarm goes off she panics.

How will Amy’s mum and dad react?

Convincing her she needs to speak to her mum and dad, Liz leads a nervous Amy home. Whilst Tracy remains calm, Steve flies off the handle and storming into the corner shop accuses Aadi of getting Amy pregnant.

Amy’s mortified to realise that now the whole school will be talking about her. When Steve demands to know who the Dad is, will Amy give his name?

Expect the return of a big character this week – as Nicola Rubinstein (played by Nicola Thorp) heads back to Weatherfield with her baby boy Zack.

Gary’s thrilled when Nicola arrives on the street to visit Eileen. But Sarah inwardly fumes when she clocks the designer clothes Gary bought Zack for Christmas. Nicola reminds Gary he’s behind with his maintenance payments but he assures her it’s in hand as he’s just landed a big contract.

Tracy thinks Amy is telling the daddy of all lies

Tracy tries the softly softly approach with Amy, gently quizzing her about the father of her baby. Amy assures her it was consensual sex that took place at a party just before Christmas.

As Amy discusses her situation with Simon, Steve clocks their exchange and jumps to conclusions. Meanwhile at the family planning clinic Amy is told she needs a scan before a termination. When the ultrasound reveals that Amy is in fact 10 weeks pregnant, Tracy turns to Amy demanding the truth.

Roy gets bad news on a bad day

It’s the anniversary of Hayley Cropper‘s death.  Over lunch in the bistro, Roy and Carla reminisce about Hayley but they’re interrupted by Shona who tells Roy that Sylvia’s been taken seriously ill.

Tracy fears Amy is keeping it in the family

The nurse explains that at her late stage Amy will need a surgical termination. Amy’s horrified. When Steve reveals his suspicions about Simon, Tracy reads a text from Simon on Amy’s phone and sets off on the warpath.

In front of Peter, Tracy accuses Simon of getting Amy pregnant. Simon denies it but it’s clear he’s hiding something. After speaking to Faye Windass (Corrie’s last teen mum) about her experience, Amy has a change of heart.

When Tyrone finds out that Evelyn failed to show up for bingo and forgot to collect Ruby from school, he’s quietly concerned. Tyrone suggests she should see a doctor as he’s worried about her memory but Evelyn refuses.

Tracy and Leanne’s mother of all fights

Leanne interrogates Simon over Amy’s pregnancy. Simon assures her it’s nothing to do with him. As Amy refuses to reveal who the daddy is, Tracy points the finger at Simon. Leanne leaps to his defence and whilst the women trade insults, Amy rushes off in tears.

Sarah’s furious to find Gary in the pub discussing a building job in Qatar with Joe. Nicola backs Sarah up, reminding Gary of her offer to stop paying her maintenance until he’s back on his feet. This is news to Sarah who hits the bar, downing shots with the girls. When Adam suggests a nightcap back at his flat, Sarah accepts, keen to avoid further arguments.

Amy has the daddy of all secrets

The truth will finally come out about the father of Amy’s child in a tense Friday night episode.

Adam and Sarah flirt over a bottle of wine but when Adam tries to kiss her, will Sarah respond? Seb watches as Sarah heads out of the flat closely followed by Adam.

Assuming that Adam’s hassling her, Seb wades in and gives him a shove. Incensed, Adam punches Seb. Sarah takes Seb back to No.11 and tends to his injuries. She plays down the situation with Adam but lies to Gary, making out Seb was set upon by a guy he’d never seen before. Will Seb go along with her story?