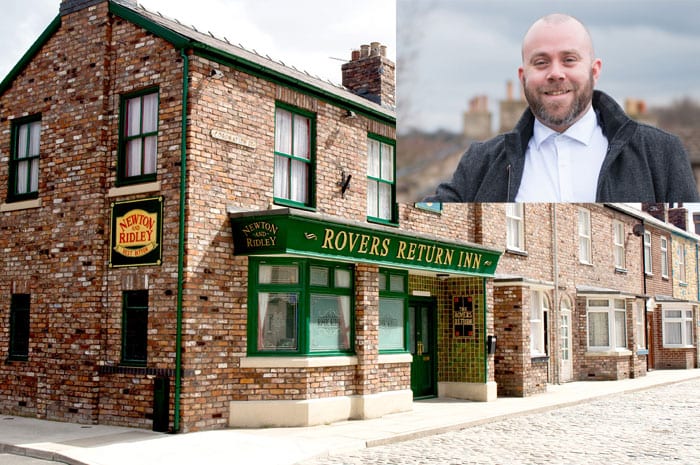 Coronation Street‘s new producer Iain MacLeod has outlined his plans for the soap – after a year of controversial storylines on the show.

Former Emmerdale producer Iain has crossed the Pennines to take on the top job at Corrie – and has hinted there will be more of a balance between the comedy and tragedy in the soap.

Outgoing producer Kate Oates had faced criticism for some of the darker moments on the show in recent months – including the rape of David Platt, the murderous reign of Pat Phelan and the suicide of Aidan Connor.

Iain, who started his TV career at Corrie, defended Kate’s record on the show – but said he would be looking to get a ‘balance’ between comedy and tragedy in the months ahead.

He said: “I know there’s been a lot of talk about the tone of the show, I think the show always needs to have big material in it.

“But the show is at its best when it has the comedy in it, as well as the low key, heart-breaking poignant stuff, some high drama and action sequences, it’s all about balance.

He added: “Kate’s a friend of mine and an extraordinarily talented woman, and in her time on this show she told some massive really socially important stories that changed people’s lives. That’s not the main reason people tune in but it shouldn’t be sniffed at and the viewing figures speak for themselves. What she did was challenging but important.

“Corrie since early in its life has done big “dark” stories. Since the early 60s it has visited the darker corners of human existence.

“There’s a risk that we look back and have this nostalgic view that it’s always just been people wittering over the garden fence but it’s always been quite challenging.  I don’t see anything wrong with that, but the key thing is to achieve a balance.

“So when we do go into those darker areas we give the fans of comedy something to latch on to as well.  But I wouldn’t say Kate’s stories were too dark. You can’t please all the people all of the time, but Corrie has been very good at pleasing most of the people most of the time.”

Iain’s first scenes on the show will not air until just before Christmas.

And fans will be pleased to hear that he is hoping to make it a MERRY Christmas on the cobbles – although there will be a surprise at the end of it all.

He has teased a big story for young Amy Barlow – the daughter of soon-to-wed Tracy Barlow and Steve McDonald – as well as a “huge new chapter” for Daniel Osbourne and Sinead Tinker.

“I don’t think people will see a sea change in the tone of the show when my name is on the end credits. it will be as it has always been – an evolution from one phase to the next.

“Only an idiot would come in and think let’s turn it into something different, rip up the rule book or change the DNA of the show. Corrie has done very well for nearly 60 years before I got here and will continue to do well for another 60 years after I’ve gone.”

Here’s what Iain had to tease about upcoming storylines.

“I wanted it to be a Christmassy Christmas.  When you sit down and digest your stuffing balls, you need it to be warm and lighthearted in places and reek in Christmas.

“There will be big heartbreaking stories within that, there will be a big shock at the end, and there may be a surprising pay-off to some of the things viewers will be seeing on screen this week.”

Iain spoke about his love for the comedic tradition of Corrie, and some of the characters he particularly enjoys in the lighter scenes.

He said: “I can watch Mary Taylor ’til the cows come home, Tracy Barlow is brilliant with comedy, particularly when paired with Steve.  Dev is another favourite of mine because of his eccentricity and waistcoats,  Rita is also capable of a comic turn.

“There will be some funny stuff coming up with Ken Barlow. He’s got comedy chops as well.”

Iain said he won’t be a new “grim reaper” on Weatherfield, with no plans to get rid of any characters.

He said: “My track record is I don’t tend to prescribe to the producer cull.  I’ve worked with many producers when on day three of their tenure they’re pictured as the grim reaper with a whole list of characters they’re planning to kill. But that’s never been my style.

“There will be characters that go or drift away, but there’s not going to be a hit list. I’m not packing loads of people on to a bus that goes off a cliff.  I’ve got a very talented list of actors so there is no one on the hit list.”

While Iain was known for experimental episodes on Emmerdale, he’s no plans for that on Corrie.

He said: “My gut feeling is Corrie is not the right place to do that.  Corrie originated this genre and I think we have to stay true to that DNA.  We can still push boundaries but in terms of packaging those storylines, this isn’t the place for flashbacks or hallucinatory excursions.

“Corrie needs to keep one foot on the ground.  So don’t expect too much weirdness.”