Over the past few years, Rudy’s has led a Neapolitan pizza revolution in Manchester. From Ciaooo to Noi Quattro, to Double Zero, Proove and Ply, if you like a thin base and charred, airy crust you’re pretty spoilt for choice.

But what about fans of a good New York-style pizza? This style, characterised by its use of all-purpose flour (rather than 0 or 00), is significantly less popular for some reason.

Easily recognised by its thin but sturdy base, which allows it to be picked up and eaten by the slice, a good New York-style pizza in Manchester is hard to find.

The front runner right now, no argument about it, is Crazy Pedro’s – whose 16″ slices come loaded with wild and wacky toppings like chips and curry sauce, beer-soaked hot dogs and American cheese.

But following a reveal of the new 22″ New York-style pizzas due to be launched at Common this week, we reckon that could all change pretty soon. 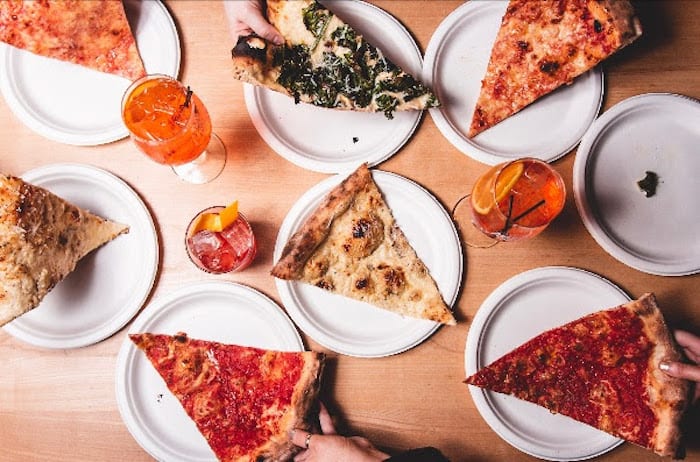 Nell’s pizza pop-up launches this Thursday 20th at the Edge Street bar, serving up 22″ pizzas to hungry Mancs by the pie or the slice.

Toppings will include spicy nduja sauce with mozzarella, cheese and onion, sausage and kale.

Prior to launching the new concept, the team did their due diligence – travelling to Manhattan last November to sample some of the finest slices going.

Next up the legendary @difarapizzanyc opened in 1964 and owner Dom Demarco still occasionally make pies to this day, widely regarded as the best in nyc. The pizza was incredible, fresh flavoured tomato, a blend of cheeses and delicious evoo. The Sicilian slice was out of this world too.

This is not the first time that Common has sought to dip its toe into the world of NY-inspired pizza.

However, following the initial soft launch, all went quiet amid rumours that Rudy’s relationship with Albert Schloss had put the breaks on the project.

It is not clear if Jim Morgan has any involvement in the new project.

The pop-up pizza kitchen launches at Common this Thursday 20th and will be taking over the kitchen of Northern Quarter bar and restaurant most Thursdays.

Bring it on. Considering the over-abundance of Neapolitan in the city, it’s about time someone levelled things out.

Meet the team behind this successful Manchester self storage business

Bolton Food and Drink Festival to return this summer