Christmas Spirit Is Alive And Well In Stretford

Each week photographer Simon Buckley visits an area of Manchester for I Love Manchester... 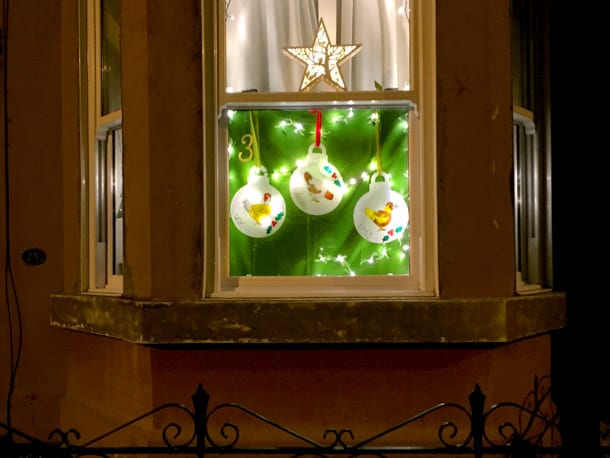 Most people know Stretford because of two buildings that sit at the junction with the road out to the supposedly cooler Chorlton – the lumpen Arndale and that strange 1930s cinema, the front of which is now painted like it’s the sinister entrance to a modern day Pied Piper’s cave.

“I felt like a
giddy kid again
at Blackpool
illuminations,
when my mum
used to get me
chips.”

However, there seems to be a lot happening in Stretford, and I don’t just mean The Drum being beaten away to make room for a shiny new McDonald’s. The Public Hall has been bought by the locals and is gradually being turned into an arts and community centre, Gorgeous Gorse Hill is on a mission to make Gorse Hill as lovely as it can be, Victoria Park is a treasured oasis in the bricked suburb and the M32 group now meets regularly in the much loved SIP Club.

I know a few people in the area, some of whom often encourage me to move there and join in with the community capers, and so word soon reached me that a Stretford Advent Trail had been established, for which 24 homeowners and businesses had turned their windows into a live advent calendar. 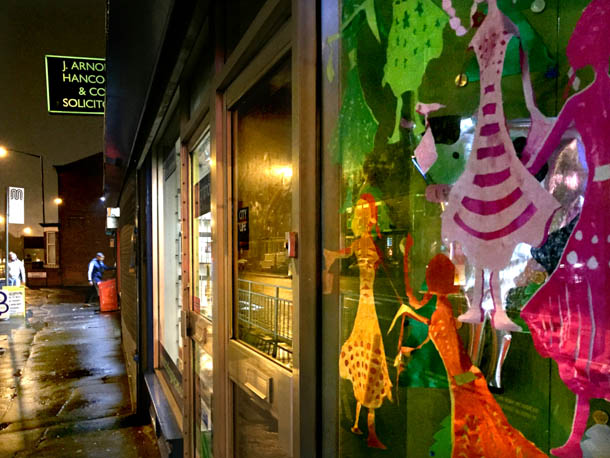 Which would explain why, on a wet, Sunday evening, I found myself sitting in my car on Norway Street, eating chips and mushy peas from the local Chinese take away. I hadn’t meant to stuff myself, but I’d just been chatting to Paula, one of the “windowers”, and had got caught up in her excitement, and felt like I was a giddy kid again at Blackpool illuminations, when my mum used to get me chips.

Paula was number 7, and was just arriving home from collecting a beetroot at a Farmer’s Market event at the SIP club, when she saw me standing outside her house, iPhone poised.

“Give me a minute” she said, “one of my swans has fallen over. Let me just put it back.” She hurried inside, and an arm emerged from behind the net curtain and placed a stuffed, white bird shape back into place. She came back out, still with her cycle helmet and hi-vis jacket on.

“What’s it like turning your house into a public work of art? Have you had many people come to look?” I asked her.

“Well”, she replied, “On the first night I had 2 young boys come and look and they both shouted ‘wow’! So, I got two wows and I’m happy with that.”

She was full of the joys of Christmas and delighted that the project had happened. “Loads of people in the street want to do it next year. It’s just brilliant all this positivity.” 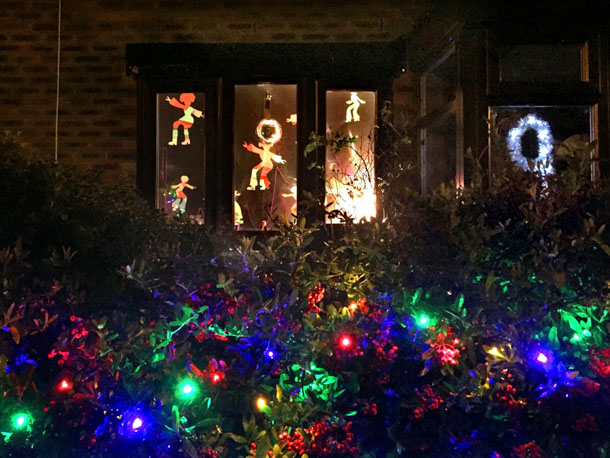 Back in my car, chips on my lap, I looked down the terraced street towards an old gas holder. Paul O’Grady was on the radio, playing classic TV theme tunes from the 1970s and on came Tales Of The Unexpected, and I thought of my nana, and her black and white television and her desperate desire for her chips to be “hot”. The ghosts of Christmas past were alive and well.

It took me over an hour to tour round the 13 windows that were now in existence. I watched all of life, whilst I toured this often ignored suburb. People buying groceries, an elderly Muslim man and his wife chatting and laughing in a car outside window number 4, teenagers on their way home from town. It was all so deliciously normal.

“We only decided to do it in October,” Jennie, window number 9, told me. She had a great window in a part of Stretford that I’d never seen. 9 Lords A Leaping had become 9 women disco dancing. “We nicked my six year old’s disco ball. It was lovely having the whole family do it together. You should come back to Victoria Park on the 24th when we’re having a living nativity as the final window.”

After a glass of wine in the SIP club (number 8 ) I felt happy enough to consider doing just that. Happy Christmas Stretford, and good luck for the coming year.