Bombs, Beckham and riots – how this man captured 40 years of Manchester’s history in iconic images

Chris Gleave has captured some of the most significant moments in Manchester’s recent history over his 40 year career as a photojournalist.

Chris was often the first – and last – on the scene of many of Manchester’s major news stories of recent times: events like the IRA bomb in the city centre in 1996; the arrest of serial killer Dr Harold Shipman in 1998; and the Strangeways prison riots in 1990.

He was not only witness to these events, but captured some of the most iconic images of those moments which continue to be used across the world today.

His work with national and regional newspapers including the Daily Express and Manchester Evening News over the past four decades meant working closely with many people in the public eye including Princess Diana, Tony Blair, Rudolf Nureyev, David Beckham, Richard Branson and Liam Gallagher. He also covered Manchester United home and away for many years.

Now Chris is about to reveal some of the fascinating stories and anecdotes surrounding his iconic images as part of two upcoming talks with Funzing.  The first will be held in his home city of Manchester on Tuesday, September 24th at The Fitzgerald, before he heads to London next month. 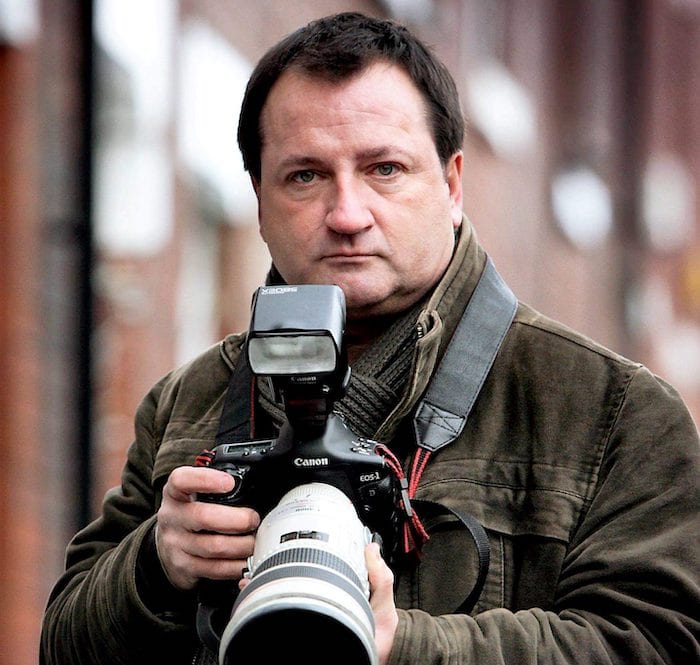 Dad-of-two Chris, 62, from Failsworth, says his job is not just to photograph, but to be a witness – and he always intends to transport those who views his photos to that reality.

“When they say a picture paints a thousand words, I truly believe that.  When I see one of my pictures, everything comes back from that moment.”

Here Chris tells us the stories behind some of his most iconic images of the past 40 years.

Chris was one of the first photographers on the scene when the IRA detonated a huge bomb on Corporation Street in Manchester on Saturday, June 15, 1996.  His photos of the day, including the image of a postbox still standing amid the devastation next to the Arndale, have become some of the most iconic images of the event.

“I was doing a job for the MEN that day – although the job was not the bomb,” Chris recalls. “Every now and again we’d get hoax calls in to the office. It would happen six times a year. So when they cleared part of the city for this bomb, most people thought it was another false alarm.

“I asked the desk ‘Do you want me to go in the city?’ and they said ‘No, we think it’s a false alarm’. So I was off shift, driving off down Regent Road when BOOM.  I jumped out of my car and the cloud of smoke was going off into the sky.  I abandoned my car on Quay Street and was running up that road, just as a bride and groom were running towards me – as were loads more people trying to get away from the explosion.  They ran straight past me and I thought ‘Hang on, who are they?’  I ran after them and managed to get their name and phone number like a good journalist should.”

The image of the bride and groom, Mandy Hudson and Franklyn Swanston, made the front page of the MEN, and went on to be used across the national media and internationally too.

Chris never met the couple again – until a BBC documentary on the 20th anniversary of the bomb.

He said: “I never knew what happened until BBC North West got us all together for the 20th anniversary, and they said they had the bride coming down.  We sat and we talked, she told me how they got divorced six months later.  She hugged me, and thanked me as that was her 15 minutes of fame – to this day everyone still talks about that image.”

While Chris is known for his footballing shots of Manchester United stars on the field, it was a photo of Reds legend David Beckham with inspirational fundraiser Kirsty Howard that remains one of Chris’s favourite images.

Chris covered Manchester United for 20 years while a photographer for the Manchester Evening News and would travel across the world with the team.  It enabled him to build a rapport with many of the players and their families – including David Beckham.

Chris says: “David was really nice and I knew his dad really well so whenever we got to where we were going abroad I’d meet up with his dad and have a drink together.”

Chris was also a regular visitor to Francis House Hospice in Didsbury, helping to take pictures of poorly children for their families whenever time allowed away from work.

Through this connection he got to know Kirsty Howard, the brave little girl born with her heart back-to-front who defied medical prognosis and became the figurehead to raise £5m for the hospice.

Chris says: “Because I went in there fairly often, Kirsty would always make a beeline for me. She’d come and chat.  I know David used to pop in there every now and again as did Victoria and they struck up quite a friendship with Kirsty.”

When David returned to Manchester for an England game after he’d left United, it was a chance to meet up with Kirsty again and Chris was sent down to The Lowry Hotel on behalf of the MEN to take some photos of their catch up.

Chris says: “When I first went in I was told by management I’d have ‘one minute’ but when Kirsty arrived she gave me a big hug, David came in and he gave her a great big hug and me as well.  He told me: “Chris, you’ve got as long as you want”.

“I asked if he remembered how he’d sit and tell Kirsty jokes at the hospice and if he had any new jokes.  He laughed: “Of course I have”.  I shot a sequence of pictures, and you can see him telling a joke it was just all so natural. Of all the pictures I took of David, and there were many, that’s the one he loved the most.

“All the tabloids used the photos the day after and I got a text from David’s dad asking for some big prints of the pictures, so I sorted that out.  For the first time ever I got a phone call from David.  He said: “Chris, those are the best pictures you’ve ever taken of me. You’ve got me scoring goals for England and United, but this means so much to me. I want it on my wall.”

When Kirsty died in October 2015 aged 20, David was among the stars paying emotional tribute to the exceptional young woman who made a lasting mark with all that she achieved in her short life.

Chris photographed acclaimed ballet star Rudolf Nureyev on a rare visit to Manchester in 1992 – and it would be some of the last images of the star before he died.

Chris recalls: “He was very rarely photographed, but I got a call from The Times that day to say they’d had an opportunity to photograph him at the Midland Hotel if I could get there in half an hour.  I was running my own press agency at the time on Quay Street so I dashed straight over.

“I rang his suite, but his manager answered the phone and said: “He did agree to this but he’s now ill and asleep and can’t do it now”.  I said “Oh that’s a shame, they wanted to use it in the papers tomorrow, I’ll leave my card in case he changes his mind.” Half an hour later they rang me back and said he would do it – and I dropped what I was doing to head back.

“He was absolutely lovely. We shook hands, I found a good background and I was able to light it reasonably well.   The resulting picture was almost the whole of the front page of The Times the next day. It was a real coup for them.

“Things like that you’re lucky to get. I was sensible enough to leave my card and it paid off.”