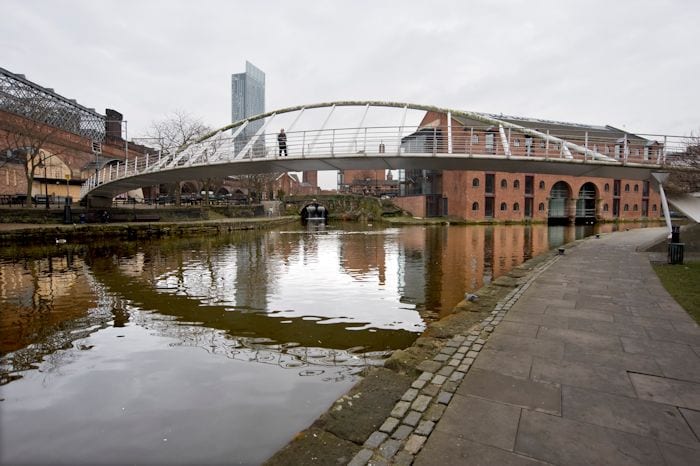 The Castlefield Canal Basin and the Rochdale Pioneers Shop have been named in the top ten most important historic places in England.

They were chosen by V&A director Tristram Hunt from hundreds of nominations by the public in Historic England’s campaign Irreplaceable: A History of England in 100 Places sponsored by Ecclesiastical Insurance.

Ten places are chosen in ten different categories by expert judges from those nominated by the public.

The Castlefield Canal Basin and the Rochdale Pioneers Shop were chosen in the Industry, Trade & Commerce category.

The Castlefield Canal Basin was the end point of the Bridgewater Canal. Built between 1759 and 1761, it was the country’s first industrial arterial canal and was revolutionary because it used cuttings and tunnels to cross land without having to follow the course of a river.

This short but important stretch was built so that the Duke of Bridgewater could have coal transported from his mines in Worsley to Manchester. It was masterminded by the pioneering canal engineer, James Brindley whose innovative thinking laid the template for the canal network that developed across the country over the following 50 years.

Later, when the Bridgewater Canal was extended through to Liverpool, it became the key route for moving cotton, food and other raw materials through to the ports at Liverpool, giving it a central role in the international trade that underpinned the Industrial Revolution.

The Rochdale Pioneers Shop is widely regarded as the home of the modern worldwide co-operative movement.

In 1844, at the height of difficult times in the working community, as the mechanisation of industry was forcing more and more workers into poverty, a group of 28 men, mostly weavers, opened a co-operative shop to sell a simple selection of high quality goods at honest prices.

The co-operative movement had begun earlier in the 19th century and, like others that came before it, this co-operative was owned and run by its members.

But importantly, the Pioneers ran it based on the Rochdale Principles which stipulated that provisions should be of high quality and sold at full weight, that there should be equality of the sexes in membership, and that the shop’s patrons should receive a share of the profits.

These principles helped shape the way co-operatives around the world operate today.

Earlier this year, the Haçienda and Chetham’s Library were named two of the most important places in the country in the Music & Literature category.