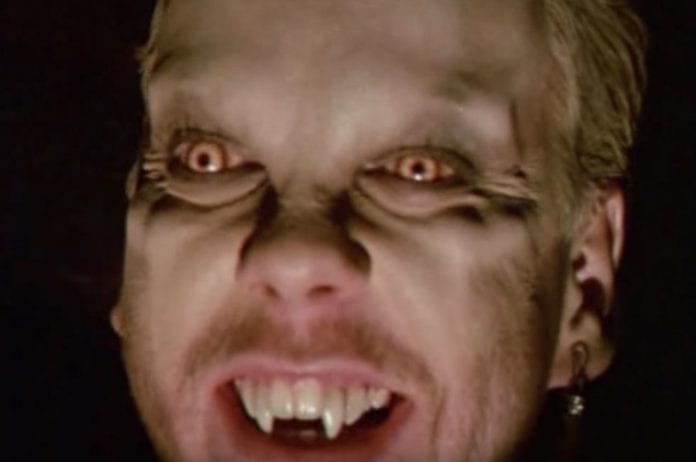 Fans of 1987 cult vampire film The Lost Boys are in for a treat.

Five of the original cast are coming to Manchester in October for a reunion at a horror convention.

Kiefer Sutherland (David Powers), Billy Wirth (Dwayne), Jason Patric (Michael Emerson), Tim Cappello (Saxophone Player) and Jamison Newlander (Alan Frog) will all be there. And each day Tim Capello will perform I Still Believe in the main arena with the cast of The Lost Boys watching from the crowd.

The stage will be transformed into The Lost Boys set for this special occasion for a recreation of epic magnitude.

The film is about two brothers who move to California to a fictional beach town called Santa Carla and end up fighting a gang of young vampires.

The title is a reference to the Lost Boys in J. M. Barrie’s stories about Peter Pan and Neverland, who, like the vampires, never grow up. Most of the film was shot in Santa Cruz, California.

The film has spawned a franchise with two sequels (Lost Boys: The Tribe and Lost Boys: The Thirst), two comic book series and a future television series.

“We will recreate that full scene from the film and will even have flame thrower cannons next to the stage,” said a spokesperson. “This is as close as you will get to stepping into the film.

“It’s one thing having Kiefer Sutherland as a guest on your convention, but to have him as a guest in a UK exclusive Lost Boys reunion like this where the photo shoot is in a Lost Boys set, it really does take it to a different level.

“Once we knew Kiefer was in Manchester on our event weekend, we chased and chased until we got our man.

“Due to his performing commitments with his band, Kiefer can only do Sunday for 3 hours. This means that photo and autographs are limited and will sell out so we advise anybody who wants them to buy them immediately”.

For Saturday ticket holders a Lost Boys special photo shoot is taking place but without Kiefer. This is priced at £100 and includes Jason, Tim, Jamison and Billy.

All photo shoots will take place in a Lost Boys set build.

Anyone who has purchased a Saturday ticket can switch to full weekend by calling 0344 8000 410.