It’s only lunchtime on a Monday, but I’m greeted by the sound of drumming as I walk through the brightly graffitied gate of Brunswick Mill Studios and into the courtyard.

With the brick walls and old-fashioned fire escapes, it’s like stepping into a New York scene, so it’s little surprise to later hear a movie studio recently viewed the place as a potential make-shift Manhattan. But the quirky exterior is merely a precursor for the eclectic interior of this vast rehearsal studio space, which occupies an old mill in Ancoats.

Run by local musicians for local musicians, Brunswick Mill Studios has been a creative hub for the past 13 years and is the brainchild of Mike Rickard. 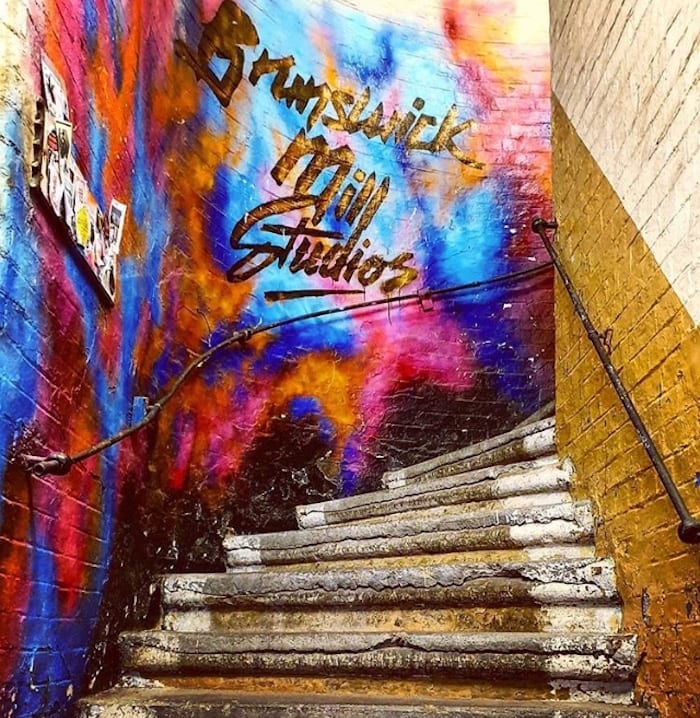 “I think it was about 2006. I was in a big group of musicians, about 25 of us, and lots of bands formed out of this group of musicians,” recalls Mike taking a seat in the studios’ communal space, with its battered sofas and subdued lighting, alongside his partners Stuart Kite-Powell and Barrington ‘Baz’ J Krell and Baz’s girlfriend Jules Pressland.

“We played all around the pubs and clubs of Manchester but we didn’t have anywhere to rehearse so I rented out a room on the other side of the mill, and built a room next door to it to help to pay the rent for that room, and then built another one and another.

And then a guy moved out so I asked if I could take-over his unit and I built another six rooms down there. Each time we built another room, we’d rent it out and with that small amount of money, we’d reinvest it to build another room, so we just carried on.”

Around seven years ago, Stu started helping Mike build the rooms, which has “been a learning curve” for the both of them Stu admits, and then Mike invited Baz, a drum teacher, to join them. 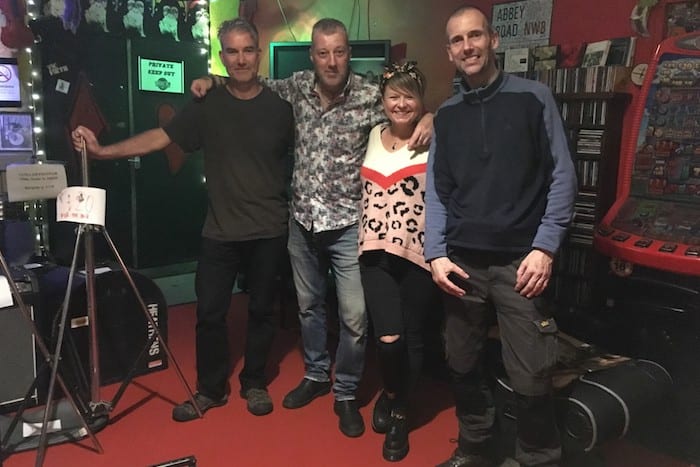 “We got more people involved working with us, more bands came along and now we’re up to 60 rooms,” says Mike.

In that time, they’ve had bands including Inspiral Carpets and The Fall walk through the doors, as well as Slow Readers Club, “and Pale Waves who played Glastonbury this year, lots of new bands going onto big things,” says Baz.

“This place has just got a great musical vibe. It’s where musicians meet and chat and share ideas. There’s nowhere else like it in Manchester.”

The space is open from 11am to 11pm every day with most rooms rented on a permanent basis from £100 per month.

In keeping with the studios’ creative ethos, the bands and musicians can decorate their space as they like.

“It’s their room to use, no one else will come in and use it,” says Jules. “They’ve got keys so will let themselves in and do whatever they need and off they go but there’s always someone here to oversee it, in case there’s any trouble with equipment or any session bands who want to come in.” 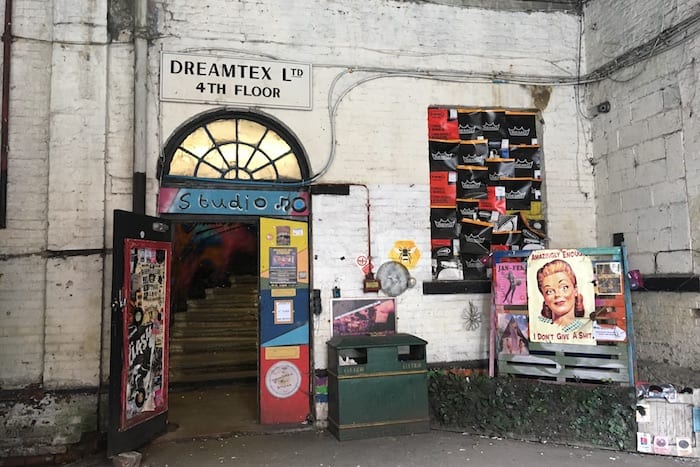 There’s also a small kitchen on site “with all the essentials,” says Stu.

“Sometimes people don’t even come to play, they come and chill out. It’s just somewhere nice to hang out with likeminded people. Everyone seems to know one another, and we’ve got our own Facebook group so there’s quite a lot networking going on.”

“We’ve also got a guy who works at Johnny Roadhouse Music, the music shop, who repairs guitars, two guys who repairs amplifiers and electronic equipment on site,” adds Mike.

“We’ve got a screen printer that does T-shirts and a little second-hand music area where we sell cheap equipment.”

While there’s currently a waiting list for the permanent rooms, the session rooms can be booked throughout the day and night on a pay as you go basis at £8 per hour.

Equipment such as drums and amplifiers are provided in each room but their have their own individual feel, including the James Bond room, which is filled with memorabilia from the films and the ‘Spiritual’ and ‘Gallery’ rooms. 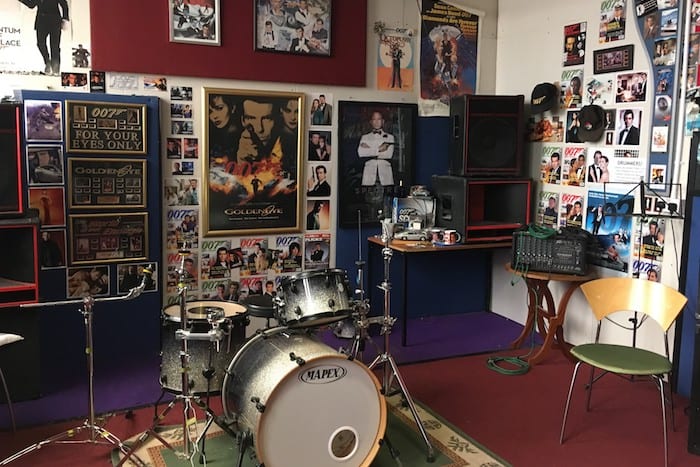 Stu states Baz is “the creative”.

“Most of it is recycled and I work with what I’ve got, but we’re adding all the time. Things comings down, going up, there’s no end to it,” says Baz who points out a piano he repainted in rainbow colours and a sculpture he created out of drum pieces that would’ve otherwise been thrown away.

Bar the lone drummer, things are quiet in the mill, as it usually is before 5pm when it becomes “a madhouse,” says Baz.

The team is keen for the session rooms to be utilised during the day and inviting community groups and workshops to contact them if they’d like to use the space at no cost.

“We were thinking, we’ve got seven rooms fully-equipped and we’d offer it for free if anyone wanted to do it,” says Mike.

“Maybe elderly people who don’t get to go out could come in and drink tea and play music, or people with mental health issues. We’ve got disabled access, so we could do so much more with the space. It’s just a case of people knowing it’s here for them.” 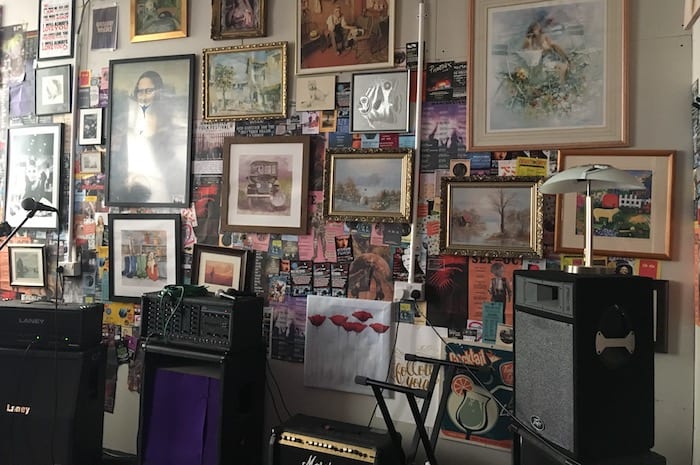 They’re also keen to set up a monthly event later this year where bands can showcase their music. They tried something similar a couple of years ago, in a music shop on site, but were forced to close it down when they were burgled two nights running.

“The night was brilliant, a great vibe. We didn’t make any money out of it, but we didn’t do it for that. We wanted a bit of fun and to help bands on their way,” says Baz.

“But I think it attracted people we didn’t know and the next thing we got robbed, which put us off a bit, so we decided to make four more rehearsal rooms instead.”

This time they’re looking to hire a venue off site where all the bands “can go and play for friends and family,” says Mike.

“The venue we used to have was really cool, and the bands loved it because it was somewhere for them to play, and somewhere to invite their friends and family so we did fancy doing it again but not here, maybe somewhere in the centre, a Brunswick Mill Studio Presents…where they won’t get ripped-off.”

As Baz comments, “Although it’s a business and we need to make money, we’re also musicians and all help each other out.

“We want bands to prosper and to go places.”