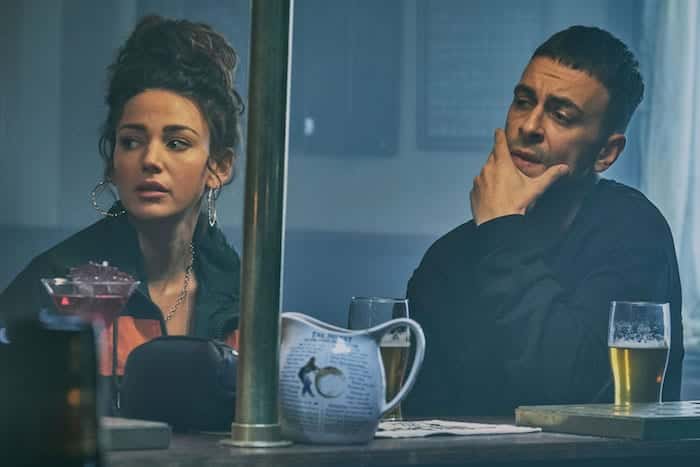 Filming took place in and around the city last year and caused a huge stir with paparazzi pictures appearing in papers and online.

Now, we can finally get a glimpse of what’s in store when all episodes are made available on 22nd August.

The series, which flips between humour and heartfelt emotion, follows a group of working-class mates living life in northern suburbia.

At the centre of the story is Vinnie, played by This Is England’s Joseph Gilgun, a Lancashire lad with bipolar disorder, and his best mate Dylan (Ripper Street’s Damien Molony).

They’re described as utterly co-dependant and have hardly spent a day apart since birth.

Dylan’s faced with a conundrum when his girlfriend Erin (Michelle Keegan) says she wants to leave town and begin a new chapter with her son, Tyler.

Does he make a fresh start with the love of his life or stay behind with Vinnie, and their inseparable gang of mates, including Cardi (Tom Hanson), Ash (Aaron Heffernan), Tommo (Ryan Sampson) and JJ (Parth Thakerar)?

The minute-long teaser begins with Vincent ‘Vinnie’ O’Neil and Dylan speeding through country lanes as they’re chased by a police car while Vinnie’s voiceover explains he lives in a shack in the woods “and if that wasn’t bad enough, I’m going bald n’ all.”

Over slow motion footage of the gang, Vinnie informs us, “These are my guys, we just have a different way of living,” before introducing us to Dylan, and then Erin.

“She used to be a wild child, but she’s really pulled herself together now,” says Vinnie as we see her give someone the one finger salute and pull a man by the ear while telling Tyler to “give him the leg, go on”.

“There’s three of us in this relationship,” Erin tells Vinnie. His response? “If there is, I’m the one getting the least sex.”

Going by the trailer, expect fast-paced scenes, whip smart dialogue, fighting, thieving, drinking, geese on a lead – and The Affair’s Dominic West making an appearance, too.

One not to be missed when it launches next month.

Who’s who in Brassic?

Vinnie constantly battles with his bipolar disorder. He had a troubled childhood. His mum left and his alcoholic, safe-blower dad raised him the best he could.

Vinnie blew his first safe when he was seven years old and has been surviving ever since. He lives alone in a shack in the woods.

The combination of rural solitude and his firm friendship with Dylan and Erin helps Vinnie cope with his highs and lows. He has street smartness and is dynamically funny with an eccentric intensity.

Vinnie is emotionally intelligent and has a great depth of feeling towards others.

Regular visits to his GP, Dr Chris, (Dominic West) doesn’t exactly provide him with the help he’s looking for, but his gang of friends are on hand to give him the support he needs and are the bedrock to his existence.

Dylan is Vinnie’s best friend. He is book smart and knows how to play a mean game of poker. He is in love with Erin and has a close relationship with her kid, Tyler.

Erin is Dylan’s girlfriend. She is fiercely independent, driven and turns heads. Erin is studying at college so she can get out of town and start a better life.

Ash comes from a proud fighting family and, raised by his hard-hearted mother, he can switch to extreme violence in seconds, which makes him handy to have around as the muscle in the gang.

Tommo is a bit of a loner but very content with his lot in life. He has no family and he is happiest when he’s shagging.

Cardi is a bit of a sweetheart. He just sees the good in everyone. The guys affectionately call him Cardi, short for Cardiac Arrest, due to his mounting body weight and unhealthy lifestyle.

JJ is from a small Asian family. His older brothers went into medicine and law, but JJ takes after his father who is the black sheep in the family.

All episodes of Brassic will be available on Sky and NOW TV from Thursday 22nd August.