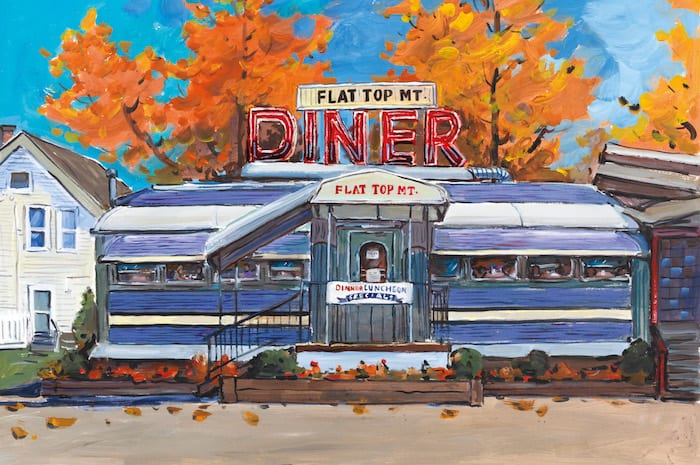 He may be best known for his legendary musical talent, but legendary singer and songwriter Bob Dylan is pretty handy with a paintbrush, too.

Dylan has been a visual artist as well as a musician for decades, beginning with drawings and designs of album covers in the 1960s including his own Self Portrait released in 1970.

After this, his success as a painter took off with various exhibitions and the release of Drawn Blank, a book of drawings in 1994.

Major exhibitions of his paintings have been shown at some of the world’s most prestigious museums and galleries.

You’ll have the chance to see exactly what we mean at a new exhibition of his work opening this Friday in Manchester.

Showcasing a collection of 15 limited edition graphics by Dylan, the exhibit is called The Beaten Path and is a follow-up to the collection of the same name released in 2016.

As with the first instalment of The Beaten Path, the paintings to be exhibited portray Bob Dylan’s travels whilst touring around his home country.

Capturing scenery and people from around the USA, the prints vary from dramatic cityscapes and wide highways to snapshots of typical towns and roadside diners found along the nation’s sleepy backroads.

They will be on show at Castle Fine Art’s contemporary exhibition space on King Street from midday on October 13.

The collection comes courtesy of art publishers Washington Green Fine Art. Each piece exhibited will be hand signed by Bob Dylan himself.

“It is a real honour to have this major new body of work in our gallery, giving us a unique insight into the everyday occurrences and objects of American life through Dylan’s eyes.”

If you fancy buying a piece of Bob Dylan’s art for your wall, you’re in luck. Prints of the 15 paintings will be available to purchase from the gallery and online. Prices start at £1,750.