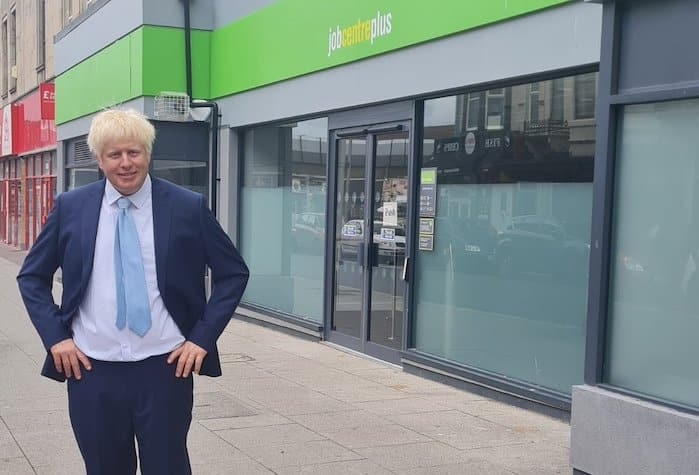 Mr Johnson quit as Tory leader, but said he would continue to serve as prime minister until the party has chosen his successor.

Over in Blackpool, however, his waxwork from Madame Tussauds has been positioned outside a JobCentre Plus.

Members of the public have been posing with the waxwork of the ex-Prime Minister in the town and posting pics.

And the reactions on social media have been priceless.

Madame Tussaud's Blackpool lugging their waxwork Boris to outside the job centre is an absolutely sensational bit of stick pic.twitter.com/pXS1N1Lp89

“I love this country sometimes,” tweeted @HannaPolasky, while filmmaker Jeanie Finlay replied: “I live on troll island… and I am here for it.”

@AmimiOfficial declared it “the best thing that’s ever happened in this country”, and @OurNewHomecoach commented: “You’ve got to hand it to the Brits. They do a few things really well: biscuits, crisps, preserves, ales and comedy.”

“Is he the only person in the world that looks like their waxwork?” asked @steveffoulkes about the model, which is dressed in a suit with a blue tie and Boris’ signature messy hair.

“Put it in No. 10,” said singer @iamdanduke. “Would do a better job of “caretaking” until October.”

In another brutal move, Madame Tussaud’s in London also updated its 10 Downing Street display, with a sign saying ‘vacancy’.

Madame Tussauds confirmed Mr Johnson’s wax figure will be removed from the Baker Street attraction when he is officially no longer prime minister.

Mr Johnson resigned as Tory leader on Thursday 7th July, in the face of a string of resignations.

A new Tory leader will now be elected, who will replace Mr Johnson in No 10.