Beg, get arrested, go to court, get fined, repeat. This is the pattern that vulnerable people across the country caught begging find themselves caught up in, all thanks to an archaic law called the Vagrancy Act.

This 196-year-old law criminalises homeless people for rough sleeping and begging in England and Wales and has been branded outdated, with many calling for it to be repealed on the basis that it does nothing to tackle the root causes of homelessness.

Of course, not everyone begging is necessarily homeless. But they are still a highly vulnerable group of people and need help and support regardless of their accommodation arrangements.

In the past few years, Greater order tramadol with credit card Manchester Police have been at pains to justify arrests by pointing to beggars’ drug and alcohol addictions. But public consultations have communicated that city centre residents would rather see people offered real help instead of being locked up.

So now Greater Manchester Police and Manchester City Council are trialling a new approach in the city centre – forgoing arrests and, instead, offering people access to help from a range of services that can all be accessed under one roof.

Police and council officers have been referring people known to be begging to a building called the Street Engagement Hub since November.

Here they can get access to a wide range of help including first aid, support for mental health, help with applying for the right kind of benefits and referral to the Greater Manchester A Bed Every Night Scheme which provides safe accommodation for those who are sleeping rough.

The new initiative aims to offer long term support solutions to vulnerable people and reduce begging as a result.

Eleanor Watts, Riverside Housing’s area manager for Greater Manchester, said: “This is the first time in my 15 years working in Greater Manchester that so many agencies have come together to provide services under one roof at same time in order to support people out of begging. 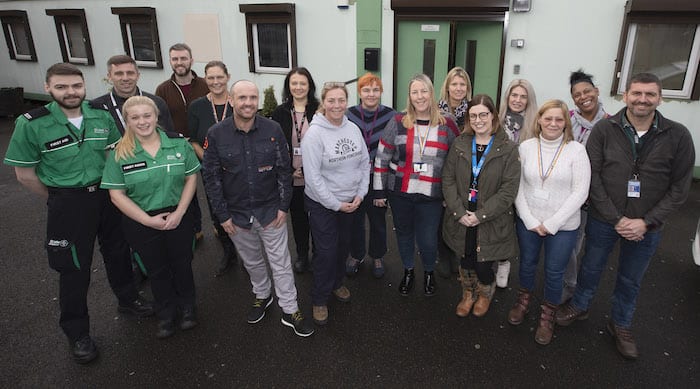 “By working together The Hub can help a person who has been begging to be seen and assessed for support by multiple agencies in a matter of a couple of hours rather than having to wait a few weeks for appointments to become available.

“Bringing all these services together allows us to support people with their physical health, mental health, substance misuse, financial support, and support to maintain their home and tenancy more quickly and health and financial problems spiral further out of control.”

Temporary passes to sell the Big Issue are being given out at the Hub to provide a short term alternative to begging, and the DWP is there providing benefits support and advice to help resolve issues that may be impacting benefits.

Many do not realise that homeless people are still entitled to claim benefits and can use their local job or support centre address on their application. However, people may get less benefit if they have no accommodation at all and are sleeping on the streets.

Since the program’s introduction in November 2019 it has proven very successful, with 64 people attending weekly sessions at the Hub. Funding has been secured to run the program until the end of March and it is hoped to extend its operation further if the positive results continue.

Chief Inspector Zac Fraser from GMP’s City Centre District, who leads the team responsible for the initial innovation which developed the Street Engagement Hub, said: “We are proud to support this pilot, and I am especially proud of the small number of Officers and partners from Manchester City Council who without their personal hard work and dedication in pulling together partners, the Hub would never have got off the ground.

“Helping create a service which can address so many different needs under one roof is proving highly effective.

“The involvement from so many partners has been invaluable in terms of the support we are able to offer. We have been able to help and support with underlying issues which are often the main barriers to support, including addiction, mental health, finances and accommodation.

“It’s great to see so many partner agencies working collaboratively to offer such a wide variety of services to some of the most vulnerable members of society.”

Deputy Mayor for Policing and Crime, Bev Hughes, added: “The Street Engagement Hub is an innovative approach to addressing begging in Manchester city centre and the early indications are that it is having a positive impact.

“In Greater Manchester we don’t just walk on by – we take care of each other.

“We’ve made great strides in tackling rough sleeping in our city-region in recent years and now this scheme is helping people who have been begging on our streets, many of whom feel they have nowhere else to turn to.

“It’s Greater Manchester doing things differently, which is what we do best.”

These are the 14 partners contributing to the Street Engagement Hub:

Big Issue: Temporary passes to sell the Big Issue being given out to provide a short term alternative to begging.

Department for Work and Pensions (DWP): Providing benefits support and advice to help resolve issues which may be impacting on benefits.

Delphi: Providing a suitable building and support for the project.

Cityco: Support for the project on behalf of the business community.