Creekstone beef has been taking the US food scene by storm in recent years, with high profile restaurants such as two Michelin starred Marea in New York listing it by name on their menus.

The new Gordon Ramsay Steak restaurant in Las Vegas uses the meat, as does Edge at the Four Seasons in Miami. You’ll also find it at Knife in Dallas, Texas, which was included in Thrillist’s 31 best steakhouses in America list earlier this year.

Closer to home, the beef also appears in the upmarket JW Steakhouse in London’s Mayfair, and in CUT on Park Lane, renowned chef Wolfgang Puck’s first restaurant in Europe.

In short, Creekstone has become something of a byword for quality with steak aficionados. And now you can try it for yourself, because it’s on the menu at new First Street steakhouse Ribeye. 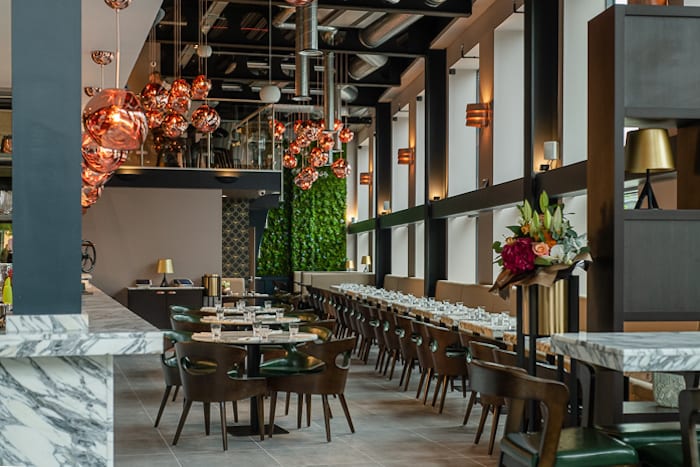 We went along to see what all the fuss is about.

A huge, airy space with room for 140 diners, Ribeye has been designed by Raju Haider, the man behind Gary Usher’s crowdfunded restaurant Kala on King Street. The ground floor dining room is elegant, with lots of cool pale marble and a mezzanine level with additional seating.

Ribeye’s head chef is Djafar Yousfi, previously of the San Carlo Group, who heads up a kitchen staff of 12.

Starters range from soup, salad and lobster fish cakes to meaty ribs and wings, with prices from £6. We opted for the chef’s platter (£18) so we could try a selection. 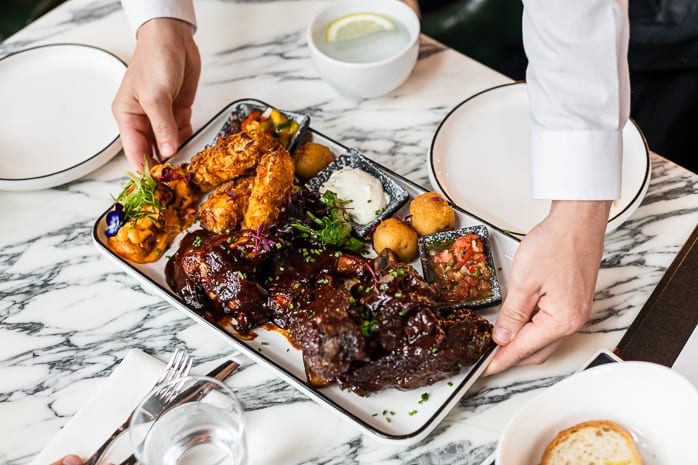 So far so good. But what about that beef? 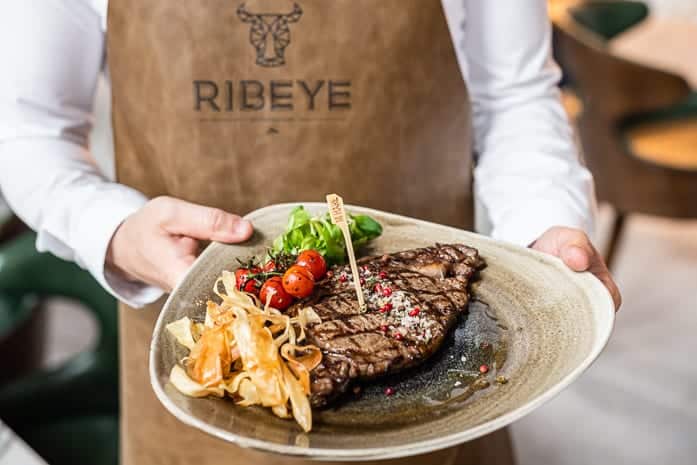 We tried the 10oz Creekstone sirloin, served elegantly with deep-fried ribbons of parsnip and sweet roasted cherry tomatoes on the vine.

Seared outside and juicy pink within, the meat was well-marbled and full of robust, beefy, almost nutty flavours. Steak fans are in for a treat with this one.

We also tried a 10oz Wagyu ribeye, meltingly well marbled with lustrous fat and sigh-inducingly tender as a result. The beef has been 300-400 days corn fed, and is a minimum grade 5 in terms of quality. 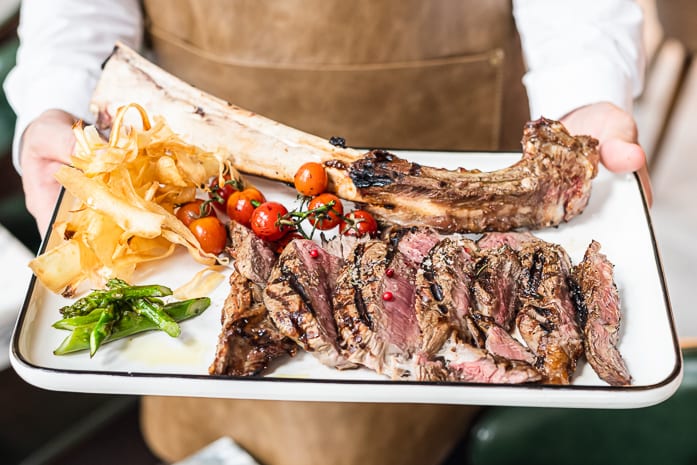 A huge 32oz Aberdeen Angus tomahawk, sourced from an award-winning Scottish farm, was served sliced alongside its hefty dinosaur-esque bone.

The side of triple cooked chips hit all the right notes, crisp and golden and nicely salted, while wilted spinach was glossy and creamy with a subtle kick of chilli heat. 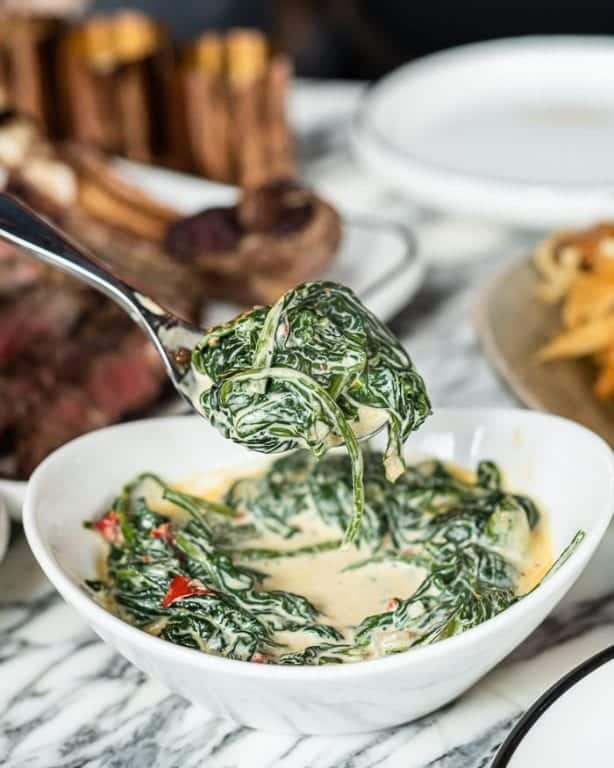 For those who aren’t all about the meat, there’s also vegetarian and vegan offerings on the a la carte menu like a plant-based burger in a vegan bun (£12) or marinated chargrilled cauliflower steak (£13) as well as plenty of choice for anyone with specific dietary requirements. 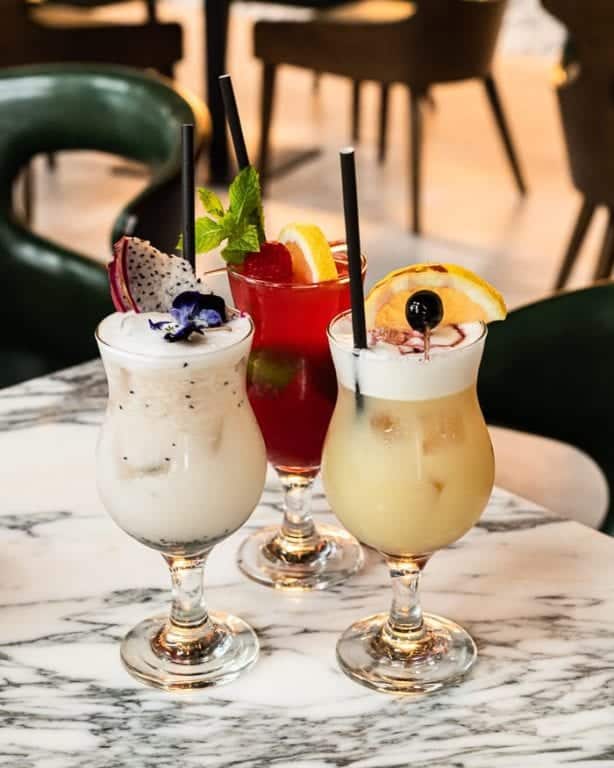 But there’s no glass of red with your steak and chips. Instead, this halal restaurant features Manchester’s first dry bar, with a range of mocktails ranging in taste from sweet to sour.

A Manchester Bee mocktail is made of peach lemonade, lime and honey, while a Ribeye Red features fresh berries and citrus. 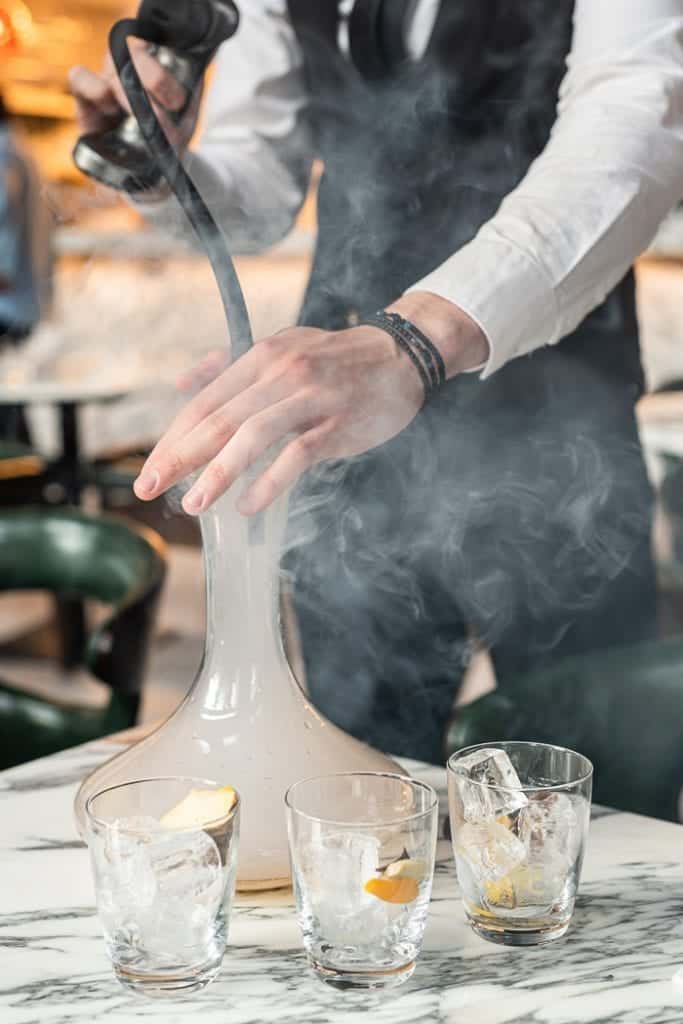 Our post-prandial concoction called Mr Bowler was like a non-boozy Old Fashioned, warm with ginger ale and served theatrically at the table with lots of smoke.

It’s a strong start for new opening Ribeye, which was already packed on our midweek, early evening visit.