The guys behind B.eat Street are a restless bunch – but in a good way.

They’ve paraded under the titles “Up In Your Grill” and “Friday Night Food Fight” before adopting their latest moniker, hopping from one Manchester location to the next with the zeal of a Deliveroo driver on weekends. Even their offshoot Junkyard Golf project uprooted and traversed across the city centre to Piccadilly earlier this year. This restlessness is a quality that seeps into the atmosphere of their nights – a lively energy that keeps dreaded food comas at bay.

But amidst the excitability, there’s always been one constant: a mission to serve mouth-watering food and drink in an off-the-wall environment. Cobbling together cookery and alcohol with a backstreet vibe and injecting a carnival atmosphere into the mix is what these guys do best, and on Thursday and Friday, they showcased their latest creation: B.eat Street Manchester.

The limited free tickets for the Thursday and Friday night opening parties were modestly promoted but snapped up in a matter of minutes nonetheless – which is testament to the promotion’s enormous popularity. The new venue is set up at Great Northern, above the staircase on Deansgate or, if you’re walking through the precinct, on the other side of the double-doors by the AMC Cinema ticket desk.

In its former makeup, the promotion had an underground quality with its grungy urban decor. Whilst this remains intact, B.EAT Street has more of a community feel than its previous incarnations. Walking in through the doors, you step into a cosy, eclectic village of diners, drinking dens and dance floors – filled with an endless maze of nooks and crannies and staircases. A stretch of diners serving grilled cheese sandwiches, hot dogs, bagels and crepes make up the main strip, with two bars on one side and a rooftop scaffolding terrace bar on the other.

During the opening parties, a delirious brass band performed, whilst bright eyed, bushy-tailed guests proceeded to mingle in the alley and explore the pop-up buildings.

The downstairs saloon is the snug Kozel Lokal, which compensates for its modest size with an attractive bar set-up and some efficient, banter-loving bar staff. Up the stairs from here is Lucky Lucky Late Bar. This is the more spacious and playful of the two main drinking dens, sporting Japanese souvenirs, dangling plastic lanterns, brightly-coloured stools, cushioned table seats and a DJ booth tucked away in the corner. Directly across the way is Milk of Burgundy – the rooftop bar scattered with striped deckchairs.

It’s true – B.eat Street is indeed as charming and offbeat as anyone could have hoped, but nevertheless, there remain a few creases for the promotion to iron out. The organisers were – dare I say it – perhaps overly generous with their opening party giveaway, with the tokens generating more appetite than the diners could cater for. The food – from the soft, flavour-bursting bagels at Eat New York to the succulent, spicy pork from JERK – was unsurprisingly on point. There just wasn’t enough of it. As one diner found itself forced to slash its menu due to high demand, a domino effect began as the hungry crowd shuffled on to the next place in search of food. The queues spilled out of the diner doorways onto the main alley, but nobody seemed to mind too much. Standing in line is never half as bad when you’re cradling a drink with music overhead.

Still, teething problems aside, the brand new B.eat Street looks deliciously promising. When the project opens its doors for real, be sure to get down early and sample as much as you can. It’s fit to accommodate those wanting to blow the cobwebs away after a long week, and equally suited to any crowd seeking a quick bite to eat before moving on into the city centre. But, most importantly of all, B.eat Street offers something different to the usual night out.

And different is always what Manchester has done best. 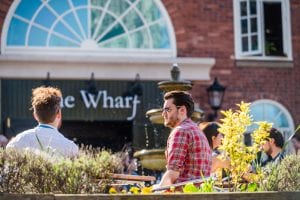 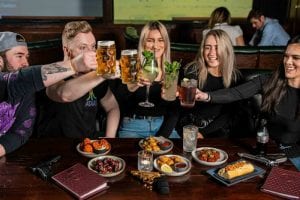 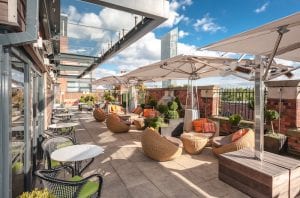