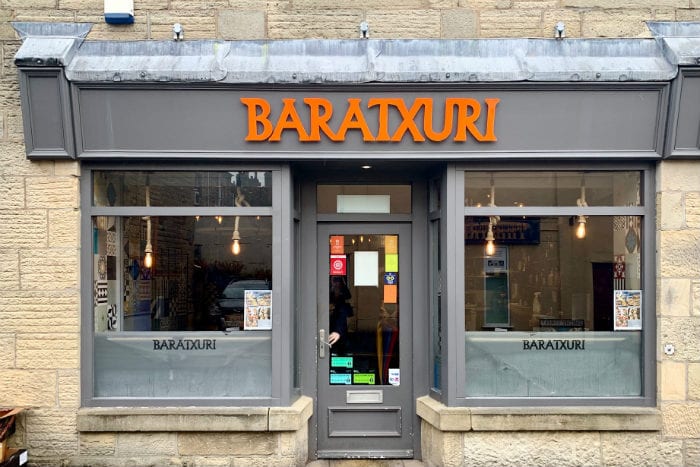 The bar area offers a casual dining experience, San Sebastián or Bilbao style. You pull up a stool and choose your favourite pintxos (small snacks) from the bar. Keep your cocktail sticks from each item you eat in your tab glass, and settle up at the end. 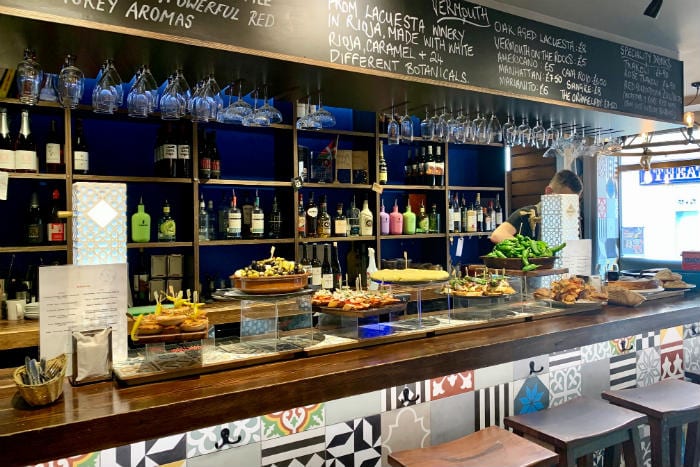 All were excellent. But one really stood out. A golden wedge of tortilla, the signature Spanish potato and egg omelette, was deceptively simple but utterly delicious.

Warm and fluffy, it was still gorgeously gooey in the centre, leaking buttercup yellow yolk over comforting chunks of potato that held their shape perfectly. It was as good as any I’ve tried in San Sebastián. 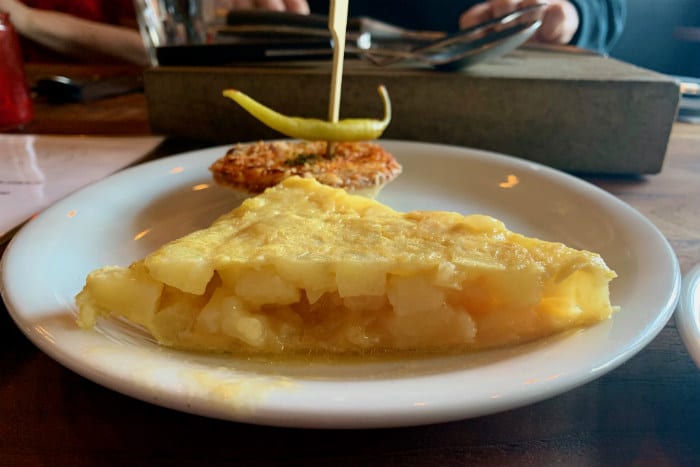 The bar itself would be enough of a draw. But then Baratxuri added a wood-fired Pereruela oven and expanded into the next-door shop, adding a dining room (‘comedor’) with table service.

There are raciones (between £5-£10 and bigger than tapas): plates of Iberico pig cheek cooked in red wine and sherry, perhaps, or fat prawns cooked over embers. Plus plates of perfectly carved charcuterie and Spanish cheeses. 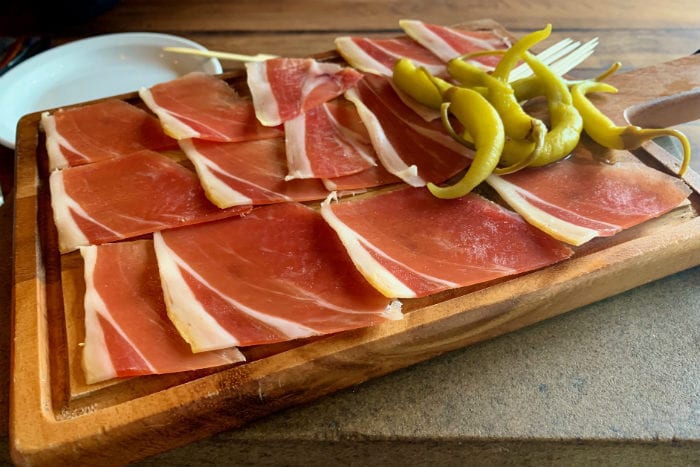 But the real draw? Rustic big cuts of meat and whole fish carved theatrically at the table and designed for sharing.

Meaty treats from the wood-fired oven include suckling pig and lamb, plus the txuleton beef (from old dairy cows in northern Spain) for which the restaurant has become known. You’ll find these huge sharing rib steaks on menus across Spain, but their birthplace is in the heart of the Basque region.

Internationally, most beef cattle are slaughtered before they are three. In the UK, many farmers slaughter by 30 months. But the beef eaten in the Basque region comes from older animals, aged between eight and 18. 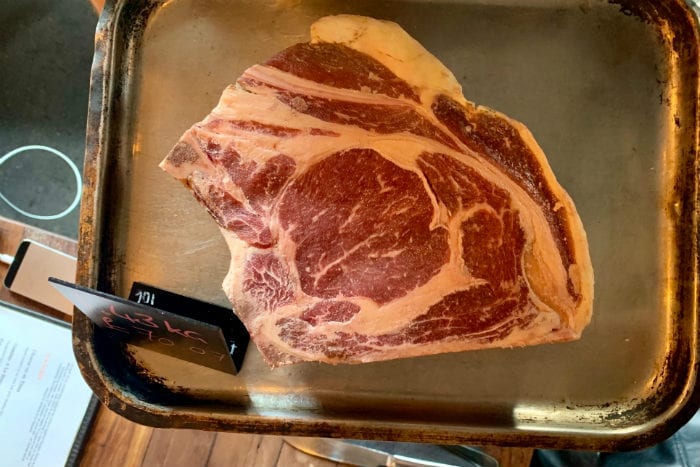 The mature meat is maroon in colour and edged with distinctive yellow fat. The taste is rich, savoury, complex and intensely beefy. Think of the difference between delicate lamb and more strongly-flavoured mutton, and you get the idea.

Galician Blond (or Rubia Gallega) is the prized next step-up, aged longer and more mature. You’ll sometimes find this on Baratxuri’s menu, too. 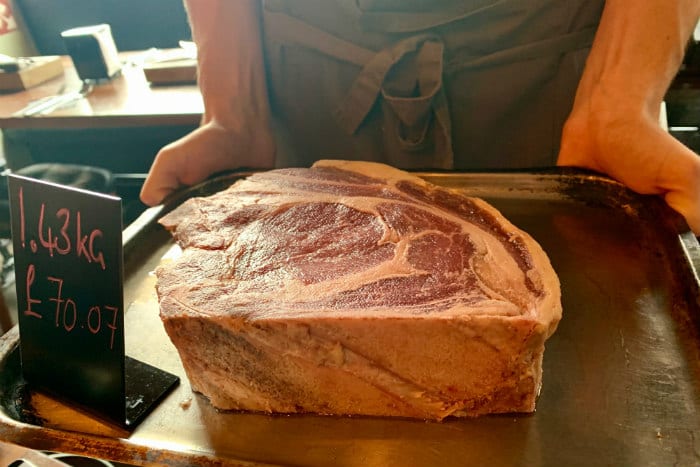 At Baratxuri, the txuleton steaks from 12-15 year old dairy cows are priced around £49/kg.

They’re treated with respect: simply grilled over the embers and served rare with a generous sprinkling of sea salt. And they’re unsurprisingly popular, so it’s worth pre-ordering to guarantee one.

Our server presented the jaw-dropping 1.4kg whopper we’d pre-ordered (£70) on a board, raw, before it hit the oven. Then around 45 minutes later it was ready. 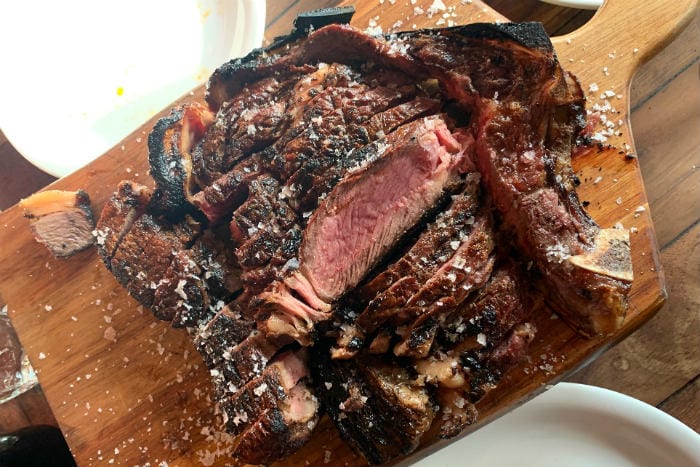 The fat around the outside had rendered down so it was crispy on the outside and ruby rare in the middle.

Obscenely full-flavoured and juicy, it’s a real steak lover’s steak. The kind of steak you immediately WhatsApp pictures of to all your meat-loving friends with heart-eyed emojis. Or is that just me? 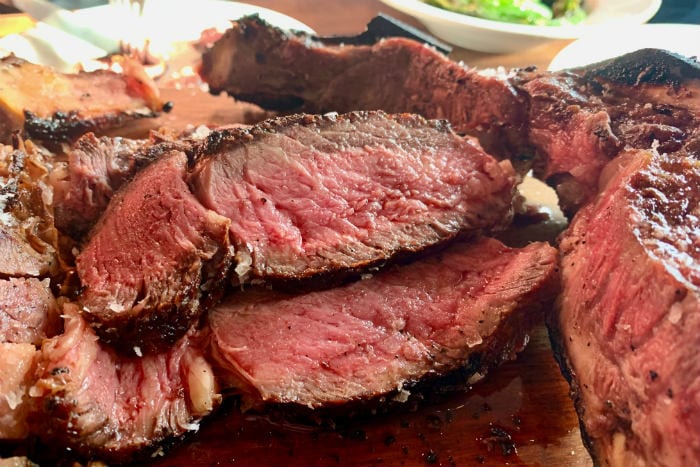 It’s not just about steak, of course. There’s lamb breast roasted in beer, whole lemon sole cooked over embers, or at weekends a whole chicken roasted in the wood-fired oven (£26), perched upright Withnail & I style.

But make sure to leave room to try the La Viña cheesecake (£4.50). Named after the famous San Sebastián bar, famous for its burnt baked cheesecake, Baratxuri gets their version spot-on. 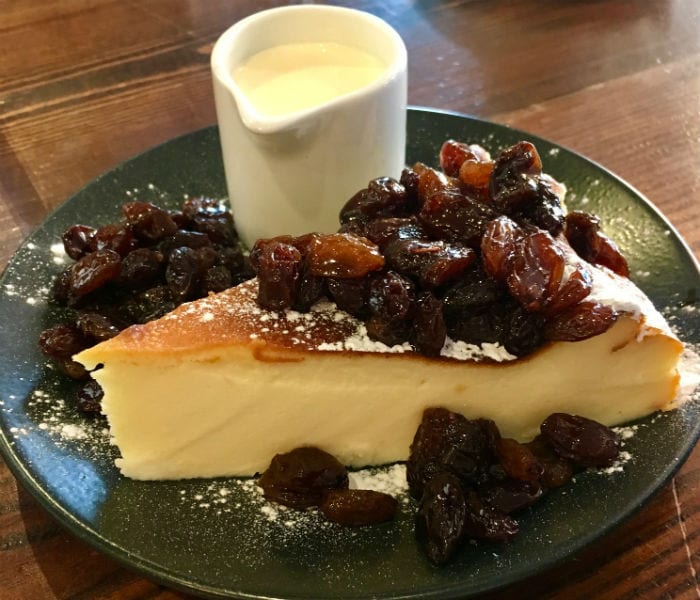 Like a creamy cross between a New York cheesecake and a flan, it’s served with Pedro Ximenez soaked raisins for added indulgence.

With dishes like these, it’s no wonder that Baratxuri’s Rachel Stockley was named chef of the year at the Manchester Food & Drink Festival Awards last year. The restaurant is frequently named one of Manchester’s best, along with neighbouring Levanter, also co-owned by Joe and Fiona Botham.

Serious cooking and a welcoming, laidback atmosphere – this is everything a neighbourhood restaurant should be.