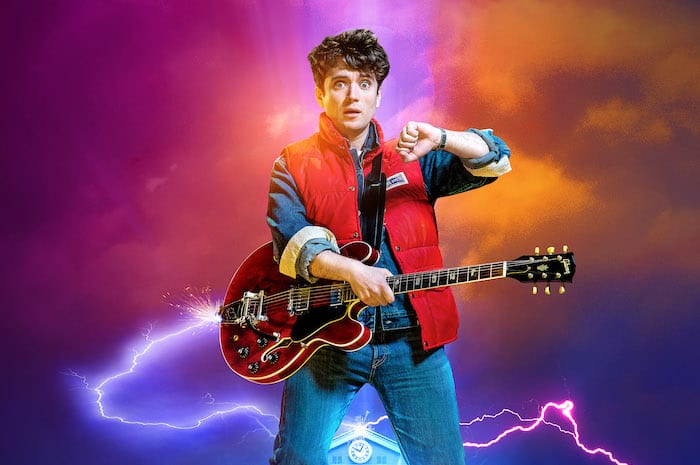 It’s been almost 35 years since Back to the Future hit cinemas.

Starring Michael J. Fox and Christopher Lloyd, the Oscar-winning 1985 film grossed $360.6 million at the box office worldwide, and its legacy continues in everything from Avengers: Endgame to Stranger Things.

Now it’s back, in musical form. And Manchester audiences will get to see it first.

The hugely anticipated new show, brought to the stage by the film’s original creative team of Bob Gale and Robert Zemeckis, will receive its world premiere in Manchester this week, playing for 12 weeks before transferring to the West End.

Like the film, the show tells the story of Marty, a rock ‘n’ roll teenager who is accidentally transported back to 1955 in a time-travelling DeLorean invented by his friend, Dr Brown.

But before he can return to 1985, Marty must make sure his high school-aged parents fall in love in order to save his own existence.

Olly Dobson, who has previously appeared in Matilda the Musical and the original production of Bat Out of Hell at the London Coliseum, is playing Marty McFly in the new production, with stage and screen actor Roger Bart (The Stepford Wives, The Producers, Desperate Housewives, A Series of Unfortunate Events) making his British stage debut as Dr  Emmett Brown.

“I am thrilled to be here in the great city of Manchester to introduce to the world this extraordinary incarnation of this hilarious and heart-warming story,” said Roger.

“Playing the role of Doc Brown, made iconic on film by the brilliant Christopher Lloyd, is going to be the adventure of a lifetime. After all, at this stage of my life, who doesn’t want to go back in time?”.

The rest of the cast includes Hugh Coles as George McFly, Rosanna Hyland as Lorraine Baines and Cedric Neal as Goldie Wilson.

Bob Gale co-wrote and co-produced the Back to the Future Trilogy with Robert Zemeckis, his long-standing collaborator. In addition to numerous other screenplays, he has also written comics, including issues of Batman and The Amazing Spider-Man.

Alan Silvestri first worked with Robert Zemeckis on the 1984 film Romancing the Stone. Since then, he has composed the music for all of Zemeckis’s films, including the Back to the Future Trilogy, Who Framed Roger Rabbit, Death Becomes Her, and Forrest Gump. He won two Grammy Awards for Believe from The Polar Express and for Cast Away.

He co-wrote the Grammy Award-winning Believe for The Polar Express, and his other songs for films include Ordinary Miracle for Charlotte’s Web and A Hero Comes Home for Beowulf. He co-wrote music and lyrics for Ghost – the Musical with Dave Stewart.

In short, it’s a dazzling line-up for the new musical, and fans of Back to the Future won’t want to miss out. Who knows, your future may depend on it.

Back to the Future The Musical will open at the Manchester Opera House on 20th February 2020 for a strictly limited 12-week season, finishing on 17th May, prior to transferring to the West End. Tickets from £19.55.