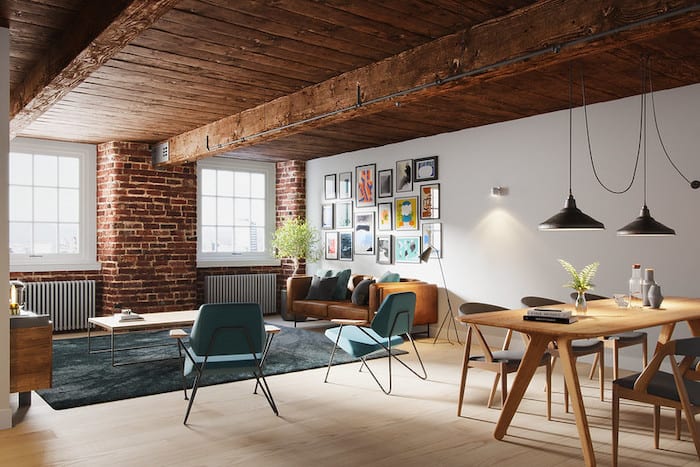 Back in 1994, an iconic TV programme kick-started a decade long love affair between urban dwellers and the ultimate city centre home – the loft apartment.

When Friends arrived on UK shores 26 years ago, a loft space like the one occupied by Monica Gellar and Rachael Green became the ultimate ambition for city centre living.

High ceilings, city views, natural light and lots of open plan space made the colourful apartment something to aspire to for generations to come.

Our love affair with the loft apartment is inspired as much by its rarity as its depiction on film and TV.

The expansive loft apartment is the must-have living space of any city-dwelling professional.  It evokes thoughts of spacious interiors, high ceilings, character features and achingly cool neighbourhoods not always catered for in your typical two-bedroom city centre apartment.

Who could forget Tom Hanks’ expansive loft apartment in the 1988 film Big which housed a full-sized trampoline and skate park?

Manchester may not quite be Manhattan, but there are definitely similarities. Much like the former Soho warehouses which inspired TV’s most famous apartment, Manchester is rich with industrial buildings ready for a residential makeover.

A loft has that rare feeling of space that can feel out of step with an urban setting, but much like TV’s most famous loft apartment, it is the heritage of the building that translates into a truly unique interior.

The Avro Building is a Grade II listed property built to serve the cotton trade in the early 1800’s. Originally Brownsfield Mill, the red brick exterior is typical of the 19th century factories constructed throughout the Ancoats area during the cotton boom.

Later it became the first home of A.V.Roe and Co., the pioneering aviation firm that created a range of innovative aircraft from their Manchester base.

Judging by the overwhelmingly positive response to the transformation of the building by regeneration specialists Urban Splash currently underway, loft-style apartments are as in-demand as ever.

Just as the derelict industrial warehouses of Manhattan led to the creation of lofts that inspired the character of Monica’s Manhattan home, Avro apartments work very much in harmony with the existing features of the former cotton mill.

The apartments are an exceptional take on the classic industrial style of the 1900’s, with high ceilings, curved windows and classic brick walls.

“Urban living is about convenience and access to culture, people and the social aspects of living in a city but at Avro, we also wanted to bring a sense of history and style to the living spaces we are creating.

“The exposed brick walls, ceiling beams and ironwork as well as the large original windows show how we have repurposed a former industrial mill into a unique residential offering.

“Avro may have the distinct advantage of being located in one of Manchester’s most up and coming areas, but it’s also a building with the kind of style that showcases urban living at its absolute finest.

The last few remaining 1,2 and 3-bedroom apartments are available now priced from £350,000. Each comes with access to the newly unveiled communal garden space, delivering a truly unique residential space in the centre of the city.

“The communal garden at Avro is a rare addition to an urban apartment building, particularly one created through the renovation of a two hundred-year-old building,” says Guy.

“However, it was important to us to create apartments that speak to the needs of modern homebuyers.  We wanted Avro to offer loft-style apartments featuring all the advantages of a city centre lifestyle but with the unusual addition of green space exclusively available to residents.

“Everything about Avro is unique but, as we look ahead to the first residents moving in later in the year, there are still opportunities to be part of this extraordinary building’s future.”

For more information, watch the new Avro film and sign up for virtual viewings via the Urban Splash website.