New menu at the once Grand Dame of the Living Ventures' empire... 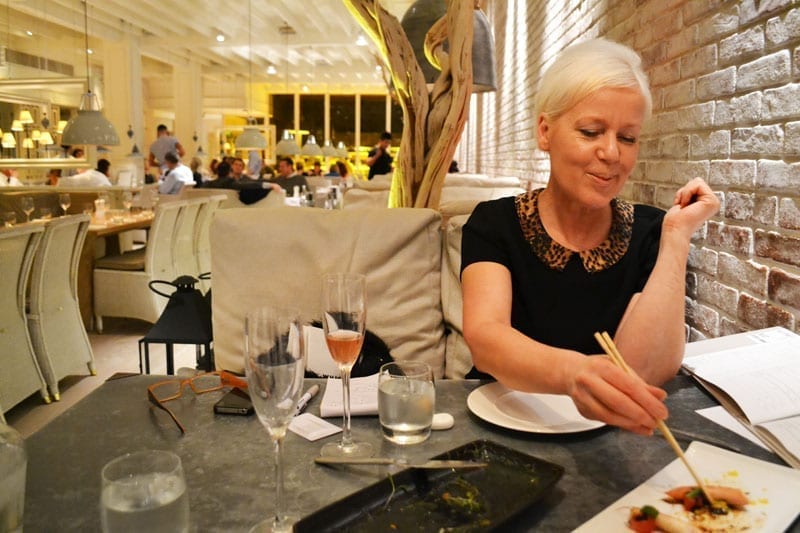 The last couple of months have been all set meals, Christmas jumpers and turkey followed by 50% off menus and abstinence – well at least for those having a ‘dry’ January in what has to be one of the most ironically devastating wet one ever.

Now, though there are still the pink fairy lights of Valentine’s Day twinkling on the horizon, our restaurants are thankfully getting back to normal and what better way to celebrate this post festive hinterland than going to one of our favourites, Australasia, which has just launched a new menu.

“…Pacific Rim flavours and well, a dash of everything good.”

It is just over a year since our last review of the once Grand Dame of the Living Ventures’ empire (or should that be Dame Edna) and since then they have launched Manchester House and spawned Grand Pacific, whilst everyone else it seems has been doing burgers and pulled pork like Elvis on a binge.

Heading for its third birthday, this leader of Manc ‘casual fine dining’ has only tweaked the menu once before so we were very excited to see what had changed and whether our favourites were still on board. 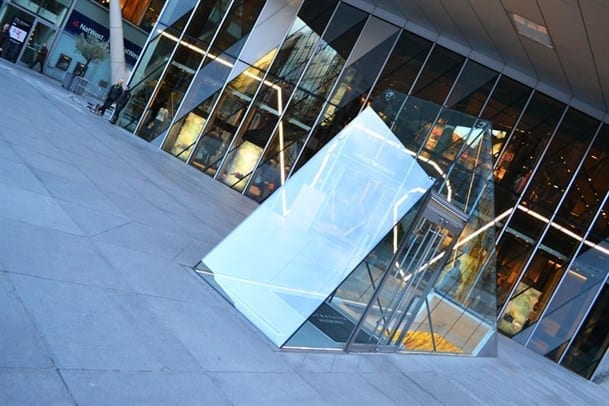 For those of you who haven’t been it’s in Spinningfields, down the mysterious mini-Louvre glass pyramid staircase next to the Armani store.

Once you enter it is a soothing, white wood, exposed brick, chilled and cool environment that has been much copied.

There’s a cocktail bar one end and then the restaurant with scores of comfy booths with squishy, don’t want to get out of cushions and private, hide your mistress ones on the far side. 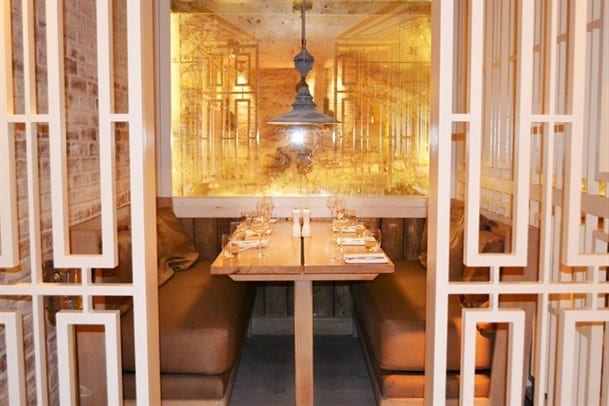 Staff, again have that much cloned Living Ventures signature of looking cool without being arrogant or aloof, they are truly passionate about the restaurant, the dishes and expertly efficient as our waitress (another Emma) personified.

The food is a fusion, of modern Australian cuisine with touches of Pacific Rim flavours and well, a dash of everything good.

You can go the trad route of starter, mains, pud or share small and big plates (always a bit dangerous with Ginger around). It’s nowhere near as pricey as you probably imagine with plates starting from £4 (which can double as starters) and mains from £13.50, the same as when we last reviewed – get in. 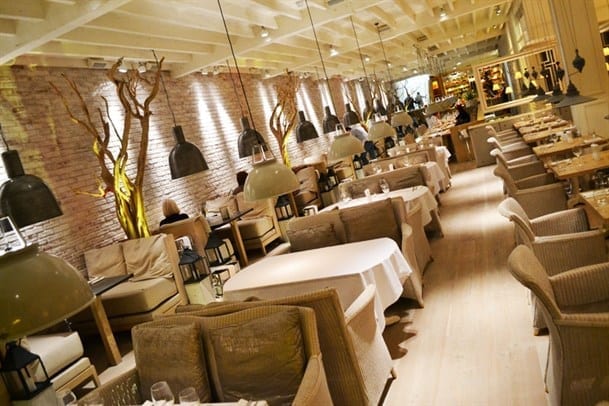 Don’t get me wrong, if you want to push the boat out and spend an obscene amount, you can and quite easily, but you can also dine in style on a lager rather than champagne budget, particularly with the lunch deal which offers a limited range of small plates starting from two for £11 and available weekdays before 5pm (if ever there was an incentive for a long lunch).

This is no wholesale massacre, much of the menu remains the same with the small plates taking the biggest hit with six new dishes, whilst desserts and the ‘big’ plates (is this the same as Alan Partridge’s big plate) having four newbies and there’s the addition of a mouth and eye-watering lobster and steak ‘surf n turf’ at £55 on the grill bit. 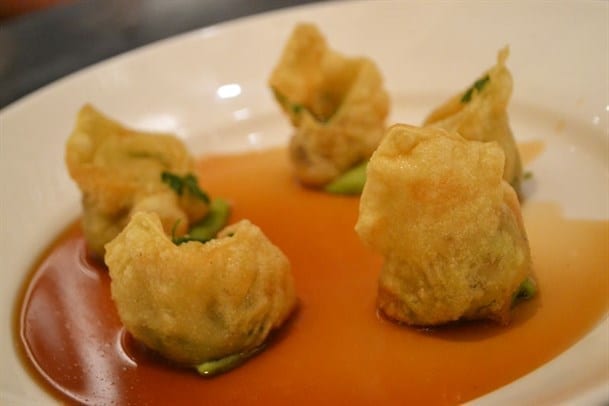 We started our meal by trying out the new small plates with the octopus and scallops (the dishes come in waves, but these are thought-out waves, where the chef knows they will complement each other rather than just being plonked on the table).

The octopus was almost an optical illusion having the texture and taste of a small, salty sausage that at first was almost too much of a hit, but then I remembered from our last meal here that every splodge, dollop, smear or sprinkle is all important to the eventual taste in your mouth. 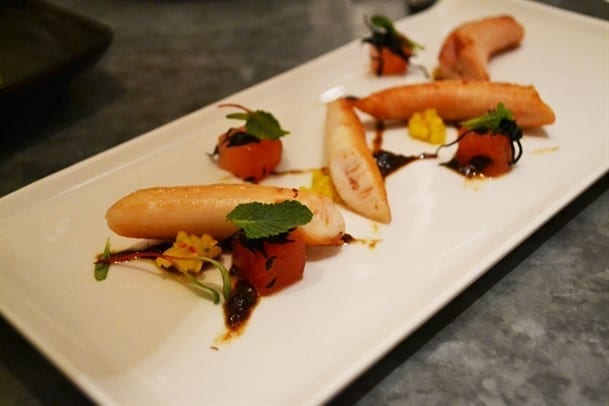 The attention to detail, devised by the cunning chef overlord Dave Spiner and delivered by his staff, is what makes Australasia stand above its ‘cas’ fine dining rivals, it really is head and shoulders above other pretenders to that throne in our city.

So the octopus with the counterbalance of succulent watermelon and hint of mint turns into a delightful tasty trick of the eye, feel and taste.

The scallops have had a make-over but I actually think this is a return to form as I remember this dish or one very similar where the fishy plump cushions are married to pork for a divine union. I think they changed this to a more citrus version at one point but it does work better with the pork belly and is one to savour. 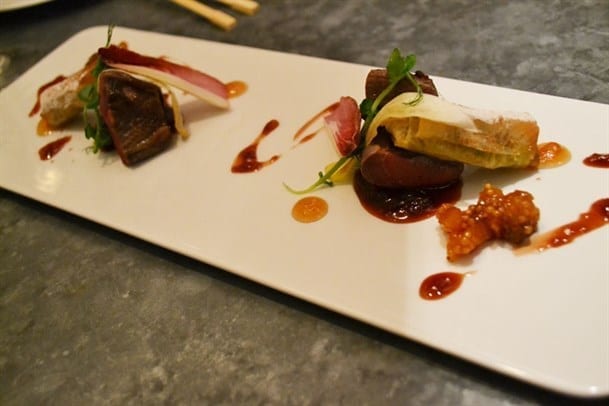 Next up was the pigeon and we were warned to be wary of ‘shot’ which could have been very expensive for them given my veneers. Here the leg pastille was the winning part of the dish and made us coo, the plump pink breast a little ‘so what’ in a sea of fabulous tastes. Onto my favourite small dish and that was a literally cracking foie gras brulee which gave up an exquisite mousse, smeared on slithers of lather bread and mind-swept by my finger. Ginger was not as keen on this, I however would go for this dish alone.

I let the Pale One enjoy most of the signature (favourite) black cod, yes I know we’ve tasted this before but obviously we had to check this was as good as ever, and yes it was. 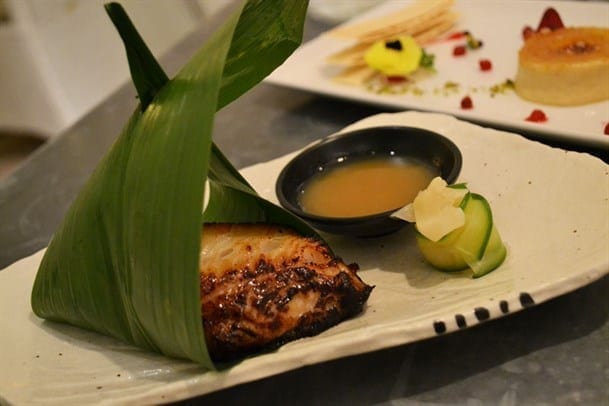 Although this would probably have been ample, we let out our belts and succumbed to ordering two of the new big plates choosing the least expensive and most expensive – from the sublime, well to the sublime.

A vegetarian potato and wild mushroom wonton platter was melt-in-the-mouth as each wonton harboured a mini-roast potato with a carb-on-carb deliciousness that make you glad resolutions are out of the window, whilst the pea puree was a perfect, fresh counterpoint.

Onto sheer bliss with a pot roast lobster in a coconutty broth (it’s the sauce that is the main difference to this dish) which was just heaven on a plate. Perfect. 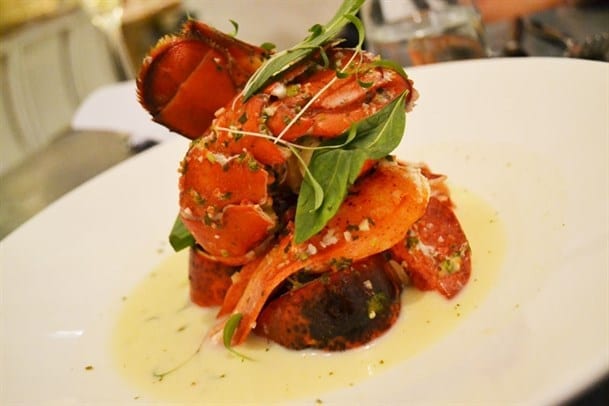 The dessert menu sounded a little ‘Betty’s tea-room’ but Ginger can never deny his sweet nature so we plunged in, ordering three to taste.

They were beautiful – literally. Beautiful to look at and with an intricacy that was almost breath-taking. Hat’s off to Rob Wilde working under Dave’s direction, these are the best desserts in town and probably a little over-looked after all the fanfare of the savoury dishes.

A deconstructed carrot cake with cream-cheese ice-cream had Ginger groaning in a most alarming way and I could only wrestle a spoonful off him. 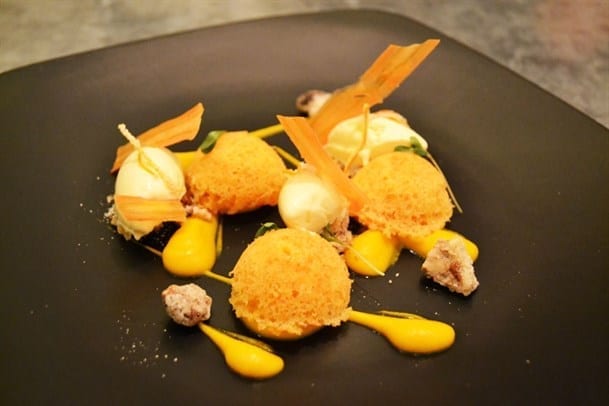 The roasted quince (the lovechild of an apple and pear) was like you imagine fruit is meant to taste and never does, its juicy gore tangling and dancing on the tongue, waltzing with a delightful yoghurt sorbet.

The black forest gateaux was a work-of-art, a chocolate plinth supporting vanilla mascarpone, chocolate mousse and I presume a black cherry sorbet, with a tiny ‘Zebedee’ chocolate spring on top and lines of sherbet to bring into the mix. A sensation.

The new dishes are a triumph on an already great menu and I would urge you to go. If you’re still on a budget at least have the lunch deal. You will not be disappointed.

And if any of the staff say they like your shoes, they don’t really mean your shoes. Its code for something else we discovered, but we’re keeping that close to our chests. You know what we mean restaurant/bar people.

We’ve already said we would marry Australasia so I guess it’s time to renew our vows.