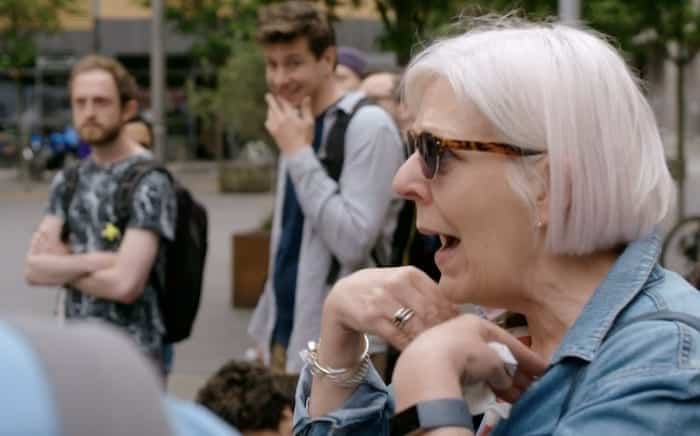 The second episode of Manctopia was broadcast earlier this week. And it uncovered an unlikely star.

In case you haven’t seen it, Manctopia is a four-part BBC2 documentary series about Manchester’s city centre property boom; the redevelopment of the city centre and neighbouring residential areas, the changing demographic, the lack of affordable housing and the people who are being displaced from those areas.

It features a cast of local characters who are all involved in the property boom in one way or another. Some are winners. Others are losers. What they have in common is that they all have a story to tell. Those stories unfold over the course of an episode or, in some cases, multiple episodes.

As you might expect, the series has sparked heated debates on social media and over virtual water coolers about the price of property and the human cost of regeneration.

But one thing that most people seem to agree about is the star of the series so far.

It’s not Jennie Platt, the estate agent with the client who is moving from a country estate and looking for the perfect city centre apartment, has a cool £1m to spend and is “happy to buy off-plan”.

Not Judith Vickers, the boss of Lifeshare, the homeless charity made homeless because of the redevelopment of Angel Meadow.

Not even Tim Heatley, the boss of Capital & Centric, who is developing an area adjacent to Piccadilly Station by converting a mill and building an apartment block and hotel.

It’s Anne Worthington, a 66-year-old grandmother from Collyhurst, or Granny Anne as she is affectionately known on social media.

But what makes Granny Anne different is that she talks a lot of old-fashioned common sense – something which is in short supply these days.

If Anne ran for Prime Minister, she'd get my vote. Intelligent, articulate and bags of common sense. What a great lady #manctopia

She’s doesn’t know if the house she has lived in since 1971 is going to survive the council’s plan for the redevelopment of Collyhurst.

She’s unhappy that the council wants to demolish perfectly good houses to build new ones like in ‘Platting Village’ less than half a mile down the road, where 4-bed houses are being sold for £300k.

“They’re good homes,” she says about the 70s Collyhurst estate where she lives. “There’s nothing wrong with them at all. They’re going to build three-bedroom homes, one-bedroom homes – that’s exactly what we’ve got now. Just pulling something down to build a new version of what’s already there. I think it’s ludicrous. Why get rid of our little estate to build much the same. They’re just replacing what they’ve got”.

For many people, redevelopment is either a good thing or a bad thing. But for Granny Anne, it can be both. Whilst knocking down decent homes is a bad thing, developing derelict land is a good thing. That’s why she’s a fan of Ancoats.

“I love what they’ve done here,” she says during a walking tour of the city led by academic/activist Jon Silver, with whom she isn’t afraid to disagree about redevelopment.

“I think this is fabulous. There’s been nothing here for years. It was all car parks and rough ground. Do we want to go back to that just to stop people making a bob or two? If they’re making that money we’re getting something out of it as well, aren’t we? I’ve not got a problem with all this building”.

What a refreshing change from people who see the world in black and white. Maybe that’s why she’s gone down a storm on Twitter, where people tend to have polarised views.

Ann is proving to be the absolute star of the show here. Intelligent, balanced and considered – get her on Manchester City Council #manctopia

A platform where Tim Heatley has been vilified because he is a wealthy investor, despite helping to raise hundreds of thousands of pounds for Andy Burnham’s homeless charity and preferring to sell his apartments to owner-occupiers rather than investors, despite sluggish sales.

Granny Anne doesn’t think Manchester is better or worse than it used to be. “It’s just different.” Right again.

And she has some unusual opinions, some of which are worthy of Karl Pilkington, another down to earth Mancunian philosopher.

This is her take on gentrification:

She says she’s amazed by the very large number of positive comments about her on social media and thinks it’s hilarious that she’s been stopped in the street and asked for her autograph.

So what’s next for Granny Anne?

She still doesn’t know if her house is going to be demolished and says she has no plans for a career in local politics, despite her newfound local celebrity status.

She’s in the next episode of Manctopia, if the trailer at the end of the last episode is to be believed. Hopefully, that won’t be the last time we see her on TV. Or maybe hear her on the radio. Or maybe someone will offer her a book deal.

So move over Karl, Granny Anne is in the house. Let’s hope the council don’t decide to demolish it.