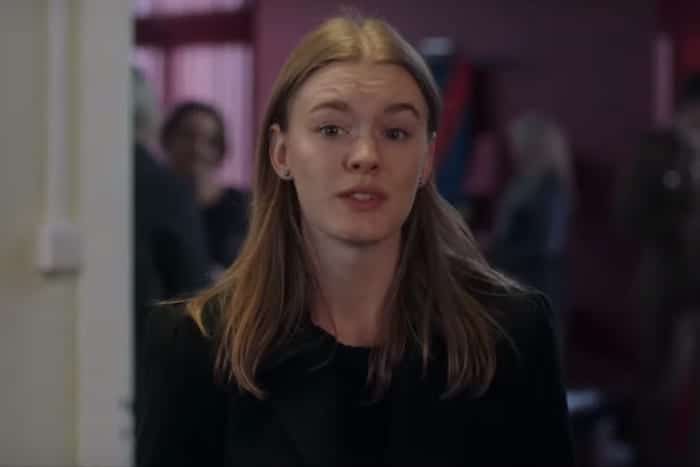 Previously known for her small screen work in the likes of Gentleman Jack, Safe and Coronation Street, Manchester actress Amy James-Kelly is making the jump to the big screen with her new film, Military Wives.

Based on the true story of the Military Wives choirs, the film stars Kristin Scott-Thomas and Sharon Horgan as two military wives living on a base who form an all-female choir while their husbands are away serving in Afghanistan.

Amy plays the central role of Sarah, the youngest of the wives, whose experience is key to setting up the choir in the first place.

What attracted her to the part?

“I loved the fact that it was an ensemble piece and that it was just going to be a group of funny, clever women all working together,” she says.

“Rachel Tunnard is a brilliant writer and the script was funny and heart-breaking from the get-go.”

In the film, it’s fair to say that not everyone in the choir is a born singer. Did the actors have to take singing lessons?

“There were very minimal rehearsals”, Amy says. “Some of us can sing, some of us had never sung before, others are professional singers, so there was a real mix of abilities, which is how it would be with a real Military Wives choir anyway, I guess.

“But [director Peter Cattaneo] wanted us to rehearse as little as possible, because they tried to schedule it in story order, so we gradually got better as we went.” 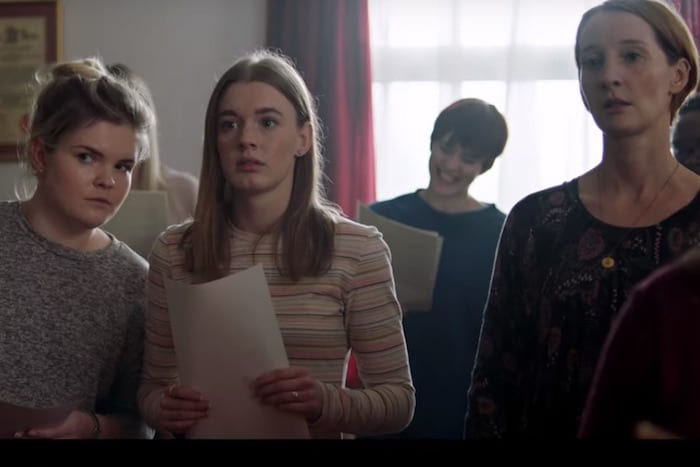 Asked whether she was one of the cast members who could already sing and whether that helped her get the part, Amy laughs.

“I can hold a tune,” she says. “I’m not Idina Menzel, but I can hold a tune. The first audition I did was actually just sending a tape of me singing and then they invited me to read the actual scenes, so I guess it helped, yes!”

How was the experience of working alongside such a large cast?

“It was brilliant,” Amy says. “It was so, so wonderful.

“We were all very much in it together – I know people have joked in the past and even sometimes asked Kristin, when she’s been doing press, whether younger members of the cast were intimidated by her, but not at all. There was no hierarchy, we were all lumped together.

“That’s the whole point of the film. You don’t have a rank, you’re not representing your husband when you’re in the choir, you’re just a group of women with the same cause and the same mentality all getting together, singing. And that’s what it was like on set as well.”

As it turns out, Amy has her own personal connection to the film.

“My Mum was a military wife, and I spent the first year of my life in Catterick, in North Yorkshire, which is where the first Military Wives choir started,” she reveals.

“We actually filmed on the base, as well, so that was a bit surreal. When I told my mum where we were filming, she was like, ‘Ooh, God, round the corner from my old house!’”

Amy says she moved to Manchester “pretty much immediately” after that first year in Catterick.

“My dad left the army and my mum came back to Failsworth, where she grew up. So we’ve just stayed close by. I think there’s three generations of my family that are all in one place now, which is quite nice.

Pressed on her memories of growing up in Failsworth, Amy laughs again.

“I mean, we could go through my awkward, punky goth phase that everybody has, and going to town when you’re sixteen and meeting up with your friends.

“But I went to school here and my acting class that I went to was here, because I didn’t get quite as far as going to uni or drama school – I did an extra-curricular acting class and that was in Manchester. The Manchester School of Acting.” 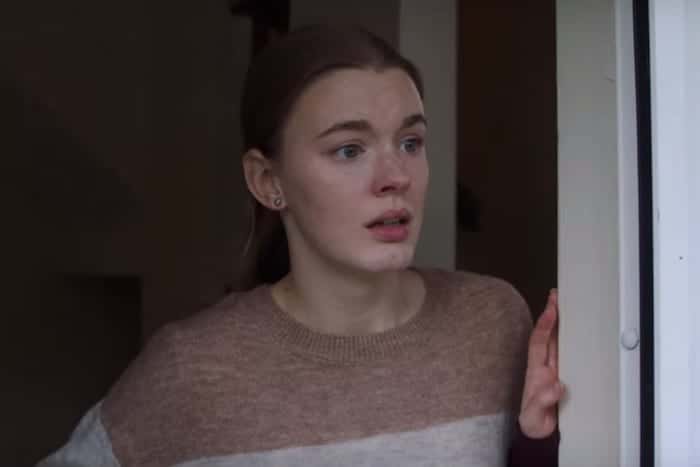 Amy’s affection for the city she grew up in is clear. So what does she love about Manchester?

“I absolutely love Manchester. I still live here now. I know a lot of my other actor friends have done ‘the move’ to London, but I’ve stayed here.

“I like Northerners. I like Northern people and I like the sense of community we have. And I think that’s what’s made me stay, as well. It’s just got everything. It’s artistic, which is obviously great for somebody in my job. I love the history, too.

“It’s the people, as well, though. I think every Mancunian person who loves Manchester, the first thing they say is that it’s the people.”

As a Manchester actor still based in Manchester, Amy considers herself very lucky.

“Pretty much every aspect of my life thus far – and most of my career, actually – has been in and around Manchester,” she reflects.

“Even if the production company has not been based here, I’ve been quite jammy that the locations are, so I’ve been able to live at home and commute, which is quite rare for an actor.”

Having grown up in Failsworth, what was it that made her want to become an actor?

“I’m not sure,” she says. “I think I just declared one day, when I was about nine, that I wanted to be an actor and everybody just went, okay.”

“I always liked watching films and my mum used to catch me miming along to the telly and repeating the lines back. I used to copy the accents and things like that.”

And what will she take away from the experience of making Military Wives?

“The Military Wives themselves actually came to the premiere and were all coming up to us and saying ‘thank you so much, you got it spot on’,” Amy says.

“They were all really impressed, and I think that’s what counted at the end of the day.”

Military Wives is on general release from today.