Alchemist New York Street is just want you want from a bar. The newest outlet from Living Ventures at the back of Piccadilly is gorgeous to look at, staffed by quite frankly lovely people, wonderfully comfortable and very, very, hard to leave.

We went to try out the food and also indulge in some cocktails (it’s a hard life) which are the lifeblood of this bustling bar. Situated behind Piccadilly, even on a soggy Wednesday evening when the menfolk should have been watching the footie, it was full of vibrant lovelies.

The gay, ginger and I were waiting for Dubai (not the country, but another Swintoner who is heading to the land of the world’s biggest/most expensive/vulgar buildings to impart financial wisdom to ex-pats).

He was late, not fully grasping the concept of going to dinner and already having had his ‘tea’, so we chatted to smiley Miles Roberts the gregarious General Manager and fantastic host to get the concept behind the bar and food menu.

The exec chef is John Branaghan who looks after all the menus for the group and has had hit after hit on his hands with the food offerings at Australasia, The Olive Press, Suburbia and Gusto.

Here the menu is basically bar food, but like the M&S ad, it’s not simply bar food, it aims to be the best bar food you can put in your mouth, ideal to accompany lazy Sundays (they do Sunday roasts from £10.95), lining your stomach for yet more cocktails or just snacking and chatting watching the world go by, doing business or trying to get a date on a plate.

It’s nicely priced and reminds me a bit of San Carlo in the early days in that you can choose to indulge and impress (they do caviar and blinis from £55 if you’re on expenses) or get down to basics with Tapatizers which can be served as starters or a shared meal from £2.75 and wonderful twists on traditional pub style scampi and chicken in a basket from just £9.95.

The key here and difference is style. Everything is done in style. From the comfy booths and eat-you-up sofas and stunning bar, to the service and presentation. You feel special and a bit loved, even if you’re only spending a tenner.

We snacked on zingy olives while the gay tried a Lavender & Coconut Daiquiri looking like he’d died and gone to heaven and Ginge had a Choc Chip Cofeetini as the gay thought he was being a bit dull. Ginge wanted to sleep with his cocktail, it was that good, but mind you he wants to sleep with everything.

We ordered a mix of Tapatizers including salt and pepper chicken wings which were succulent, non-greasy and tasty, duck rolls which were more pancake like (which I prefer) with a hoi sin sauce that was so good the Ginge wanted to dip everything in it (and did), prawn lollipops which are beer-battered and yummy with sweet chilli sauce and nachos which the Ginge thought could do with a bit more on top – mind you he thinks that about most things. Ginger thought the tapas style starters were the Usain Bolt of starters.

By the time Dubai landed and joined in the fun we were onto our mains, guided by our two waiters Oli and Alex (known as keen-as). We got two waiters for the price of one (much to the gay’s delight) because Oli is being trained and they were attentive and chatty, knowing their way firmly around both the bar and food menus.

We ordered the chicken in a basket which looked stunning presented in a wire cage that was camper than the gay. He declared himself to be in food heaven tucking into the chicken and coleslaw and said he would divert forever to come here rather than his fave KFS chicken zingers (I’m not supposed to put that in).

I had sea bass with fries which was perfectly cooked and shows that as well as comfort food, Alchemist can do more subtle flavours and light food in style. In fact there are a range of scrummy looking salads for the diet/health conscious.

The Swinton boys obviously had meat, both opting for steak frites which start from under £10 (one rib eye, the other fillet), which were hearty and cooked as they requested (rare and medium rare). Steak can be the test of a restaurant, and this passed with flying colours, cooked well and with an optional peppercorn sauce.

We also had the scampi which I have had on my last visit, to take a photo of it so you can see how great it looks. Obviously we ended up eating it and this sums up Alchemist. Yes it is scampi and chips (always a guilty pleasure of mine) but it’s the best scampi and chips you’re ever going to have. It’s the little things like the batter, fries and simply gorgeous tartar sauce.

The guy’s wine ( a Malbec was Beyonce in a glass), were full-bodied with bottles priced from £13.95, while I stuck to the fizz with a light Prosecco Doc Bel Star, £24.95.

It was onto pudding and we laid waste to sticky toffee pudding, a giant profiterole (which is huge and I couldn’t eat it all though very delish), waffles and Affrogato which start from £3.95. They were simply what you want in dessert – sticky, creamy, gooey and went down a treat. 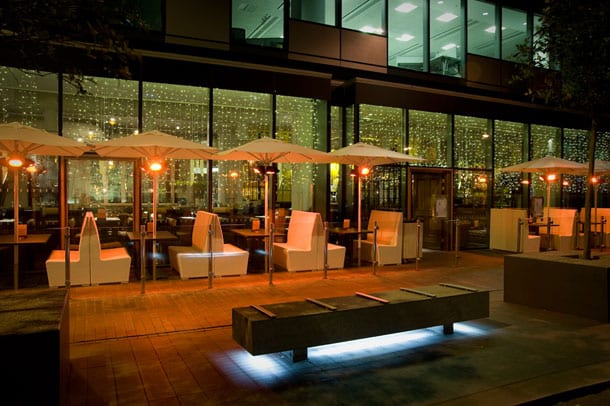 It was onto an outside booth for the cigarettes and cocktails and I do like a place that pays as much attention to the outside as in.

Sat in comfy wicker booths under heat-lights, perfectly cosy as the first chills of Autumn hit, we decided this could only get better if the lamps could also tan us, two birds in one.

We were introduced to cocktail guru Aaron, a god among mixologists who delighted us with rounds of superb cocktails which start from a stunningly reasonable £5.95. We tried Espresso Martinis, The God Father, Passion Fruit Mojito and Spring Sling. Perfect, delicious, deadly.

We ended the evening with the theatrical Mad Hatter’s Tea Party, at £18.50, a cocktail brew that can be shared and you just have to go and try it. You won’t be sorry. From the flavours of the fruit bubbling into vodka, elderflower liqueur, cointreau and served in glass tea cups with lashings of dry ice, it has to be seen to be believed.

On the I Love-ometer we would marry the Alchemist New York Street and we would never, ever leave it.

Alchemist New York Street is open from noon to midnight weekdays and until 1pm on Thursdays, 2pm Friday and Saturdays. Weekend brunch is also available from 10am, Saturdays and Sundays. You can also get a Alchemist card to get 20% off food. Log onto www.thealchemist/apply.