Adam Reid’s Great British Menu can now be delivered to your door – what’s it like?

Adam’s dishes – including a refined tater ’ash (a dish he called ‘From The Beatles to Oasis’) and a reinvented treacle tart (called ‘Madchester – I am the Resurrection’) wowed both viewers and judges on the hit BBC show last year.

It’s no wonder, then, that when the Manchester chef announced casually on Twitter that he was working on a version of the menu that people could eat at home, to be delivered anywhere in the country – well, excited is an understatement.

As soon as the menu went live, the website crashed under the demand. Urgently refreshing the page and holding our breath, we managed to snag one. £90 isn’t cheap for a meal kit, but they all sold out almost immediately. Like Glastonbury tickets, but for fine food fans.

The box arrives with all the ingredients pre-prepared and chilled. There are a lot of little bags and pots for every dish. It’s slightly daunting.

Looking at the instructions helps. They’re clear, with a running order of what to do when as well as a step-by-step guide on how to prepare each dish, and written in Adam’s friendly tone – like a mate guiding you through it.

The tips are helpful and sometimes tongue-in-cheek: “don’t set the place on fire”; test your deep-frying oil is hot enough with something suitable, “not a Mars bar”; and “most importantly, don’t carry your tea towel over your shoulder… despite ideas to the contrary it doesn’t make you a professional chef”.

So how easy is it to prepare, for those of us who aren’t professional chefs, tea towel over shoulder or not? We couldn’t wait to find out.

All the ingredients you need (apart from some oil or dripping for frying) are included and are grouped together by course. Some just require reheating and assembly, while others need a little more attention. 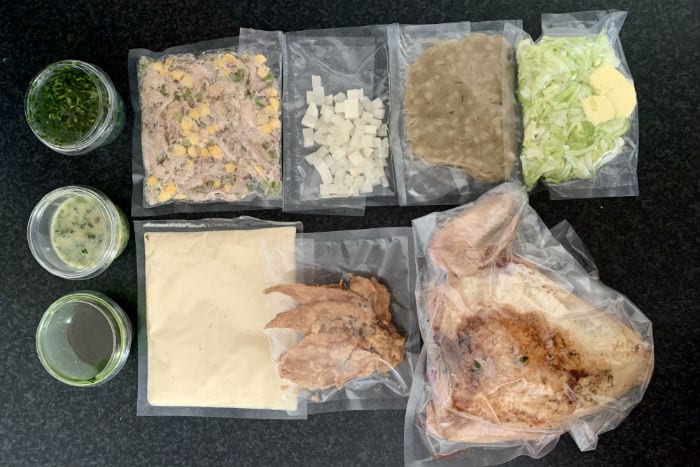 We start with the chicken main, since the crown needs 30-40 minutes in the oven plus another 20 to rest before carving. While that’s cooking, we get on with the tater ’ash starter. It’s become a signature dish for Adam, but this is a refined, elegant take on the regional favourite.

The smoky beef needs warming through before being mixed with diced vegetables, potatoes and croutons cooked in dripping, and finished with mushroom catsup.

The tater ’ash is served with Manchester ale bread, made by local bakery Pollen to Adam’s recipe, and an intensely savoury beef butter. 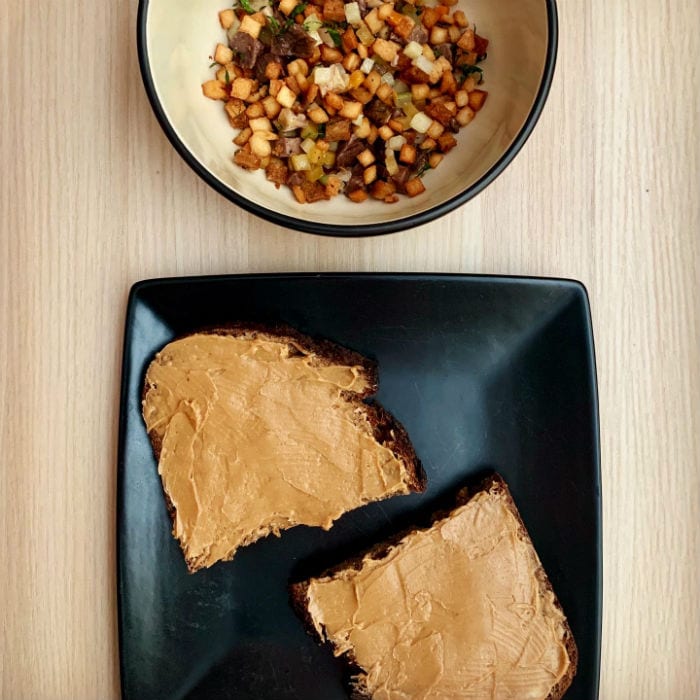 Those who’ve tried it at The French will know that this butter is the stuff of legend. We spread it unashamedly thick and are immediately transported back to our favourite table at The Midland. It’s powerful stuff.

The fish course – called ‘Northern Soul’ – is slightly more demanding. Almond milk must be heated ready to poach the cod fillets, a batter must be made (using a ready-made mix to add water to), another piece of fish must be deep-fried, buttered leeks need to be cooked, and a smoked roe sauce needs constant attention so it doesn’t split. Get someone to help with the stirring if you can, an extra pair of hands really helps.

The finished dish is a joyous layering of flavour and texture, from the crunch of light crisp batter to the tender cod fillet and heftily buttered leek, with a sauce so creamy and smoky you could happily lick the plate. And you can if you like, you’re at home, nobody is watching. 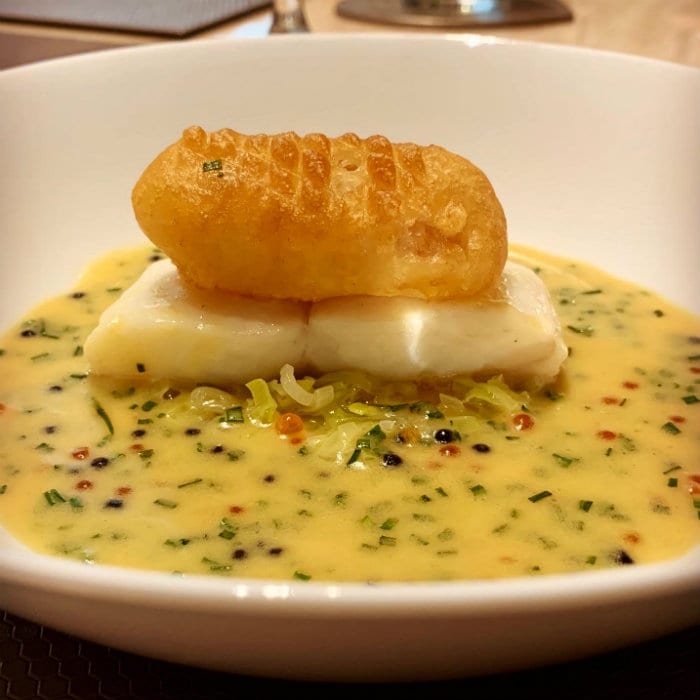 Meanwhile the chicken is resting, burnished bronze and beautiful. The accompaniments – a stew with shredded chicken leg meat, pearl barley and pickled turnips, gravy and buttered leeks – need preparing in a similar way to the fish dish. The golden shards of crisp chicken skin are, thankfully, ready to go.

And then come the daunting serving instructions – the breasts need removing and carving before being replaced on the crown, with the slice marks covered in a warmed garlic and herb glaze.

My finished dish doesn’t look anywhere near as impressive as when Adam does it, but it’s absolutely delicious, as rich and comforting as a cashmere blanket on a cold night. It makes a familiar roast chicken dinner seem somehow brand new. 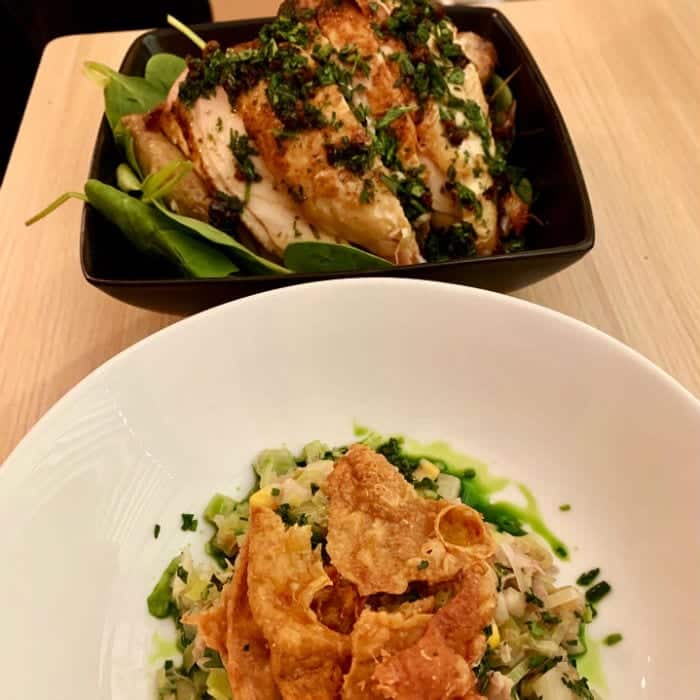 Onto pudding, and this course is much easier to prep – handy if you’ve been topping up the wine enthusiastically as you eat.

The treacle tarts just need popping in the oven in their cases, before being turned out and topped with clotted cream and grated orange and mint butters that have been waiting in the freezer. I try (and fail) to quenelle the cream. Clearly I’m not cut out for MasterChef just yet.

The dessert’s a cracker, though. 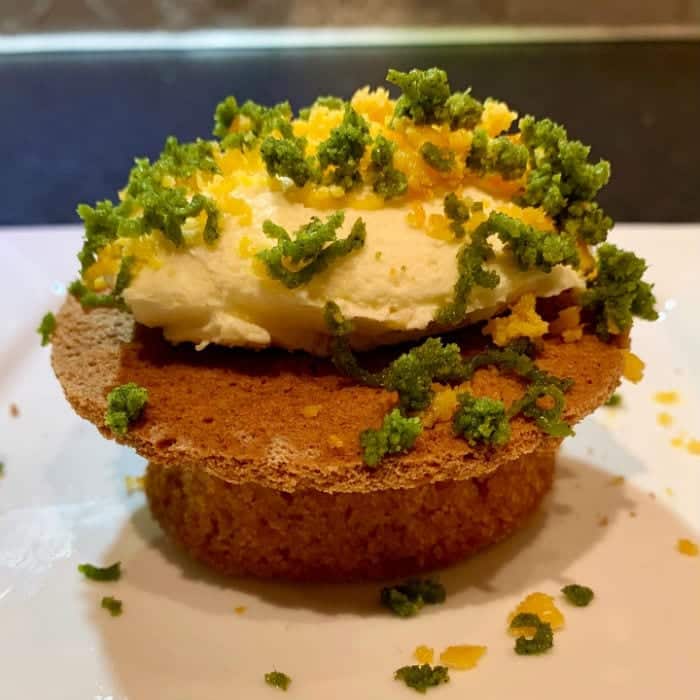 Although £90 for two might seem steep, the food is incredible, and we had such a fun evening putting it all together. We didn’t think it was possible to eat this well at home. You can even order matched wines to go with it, courtesy of Gusbourne.

Until restaurants can reopen, this is the next best thing, perfect for a special occasion or date night. You’ll have to be quick off the mark to order it, though – keep an eye on Adam’s Twitter feed to see when the next kits are available.