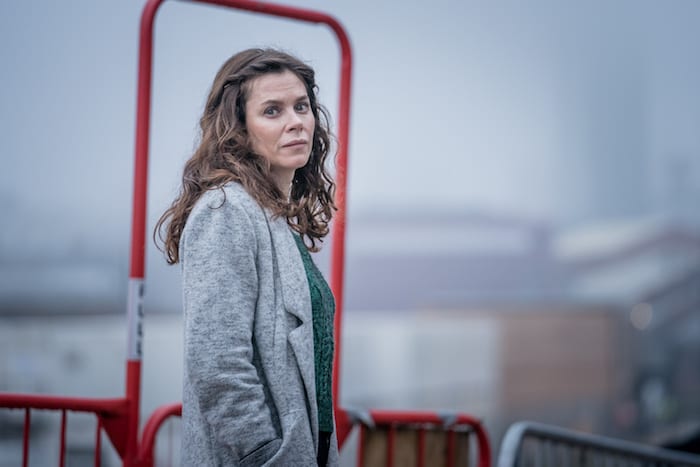 The beautifully written drama about a young boy who identifies as a girl grabbed her attention immediately and it wasn’t long before she met Nicola Shindler of Manchester’s acclaimed RED Production Company.

“The first thing Nicola and I discovered is we grew up in the same street in Rochdale and went to the same school, which was extraordinary,” says Anna.

The 42-year-old, who’s lived in the States for years but retained her accent, couldn’t wait for an opportunity to shoot on home turf.

“I was told, ‘We will be shooting this in Manchester and we’d like to hire a northern crew because we work in the north’, so I said, ‘Yeah, going home, that’ll be awesome’.

Vicky’s allowed her son to dress and behave as a girl at home but as puberty looms, she feels conflicted about what the future holds, and even questions whether she’s at fault.

“Vicky’s having a silent battle with herself as she faces the prospect of saying goodbye to her son,” explains Anna who’s mum to Gracie, 13, from her relationship with actor David Thewlis.

Vicky’s also separated from Max’s father Stephen (Emmett J. Scanlan) because of their opposing views as to how best to protect their youngest child.

“She still loves Stephen but he just can’t bear the situation they find themselves in. It’s essentially about a family that’s been broken up because they can’t agree,” she says.

“They’re totally torn and don’t know what to do. Instead of finding answers together as a family, they break up and go off on their own journeys, which makes the whole thing much harder.”

While Anna was taken with the script written by BAFTA award-winning Tony Marchant, she told the team at RED she knew little about the subject matter.

“I said, ‘This story is going to teach me something because if this was my daughter Gracie, I don’t know how I would deal with it and I don’t know what my views are because I’m so ill-informed. They said, ‘Well, surely that’s the reason to do this? That’s what we want, we want people to question, open their eyes and not be ignorant’.”

Anna’s been here before. Back in 1994, she and Nicola Stephenson created headlines when they kissed in Brookside – the first gay kiss in British soap history.

“At that point, I knew about lesbians, but I didn’t realise there were people who were so unhappy and felt so lonely with no one to talk to that they were threatening to kill themselves,” says Anna, who was 17 at the time.

“I’d walk down the street and would never, ever be called Anna. Yes, I was playing a famous character, but I was always called ‘dyke’ and ‘lezzer’, people were that affronted. Look how much things have changed in those 24 years because people have opened their eyes.”

Although she believes “we’re moving forward, hopefully”, she points out that there’s still ignorance and misunderstanding.

As part of her preparation, she visited Mermaids, a charity for children and families who are dealing with transgender.

“That just opened my eyes completely. We met a boy who was formerly living life as a girl and you would never have known. We also heard shocking stories of bullying, abuse, death threats, just awful things that made me even more passionate about getting it right and saying to people, ‘You never, ever judge something you don’t have a clue about’.”

Anna reveals she was bullied at school and “I understand how mean children can be,” she says. “But for adults to do that? They should know better. I have no time and no forgiveness for anybody who would be so vile.

“Nobody has to want it, agree with it, like it but it’s just the same with any topic, learn about it, educate yourself, because knowledge is power.”

We also see how other family members are affected in the drama.

“Lily feels left out because her parents are concentrating on their youngest child,” says Anna. “All of the elements of the story are based on fact, from a massive amount of research and talking to families.”

Millie is a member of the Oldham Theatre Workshop where Anna trained as a youngster. “I went three nights a week and all day Sunday,” she recalls.

At the age of 13, she was cast as Michael Palin’s daughter in Alan Bleasdale’s Channel 4 drama G.B.H before making her Brookside debut. She’s gone on to appear in films and TV series, both here and in America, and most recently starred in ITV’s Marcella.

But for all her travelling over the years, Manchester’s where her heart is.

“I keep coming back to Manchester and I’m always welcomed home,” says Anna. “People are really nice and it’s good to set an example, saying you’ve not got to come from a wealthy family, have a silver spoon, you’ve not got to speak with a posh accent. If you’ve got determination and self-belief and you’re willing to work very hard, you can do anything. It’s nice to be able to fly that flag.”