A night with Gino D’Acampo: what happened when the Italian celebrity chef came to Manchester?

It’s not exactly a secret that Gino D’Acampo is a bit of a hit with the ladies. Known for his cheeky smile and wit, the man’s a self-confessed flirt with bags of Italian charm. A dangerous combination.

It’s one thing to watch him on the telly, but quite another to witness in person.

Making our way into his My Pizza and Prosecco bar to meet the great man, we join a gaggle of adoring female fans all dolled up in their Sunday best and simply bursting to meet him. Two ladies in floor-length evening gowns look like they’re going to a ball.

A glass of fizz in hand, we are led to our table. Half an hour later, Gino is still nowhere to be seen but his image gleams down at us in the hundreds from the black and white photos on the walls.

Behind us, a giant portrait of Gino in a gilded frame acts a placeholder. Deprived of the man himself, ladies start coming up to take their picture with it. 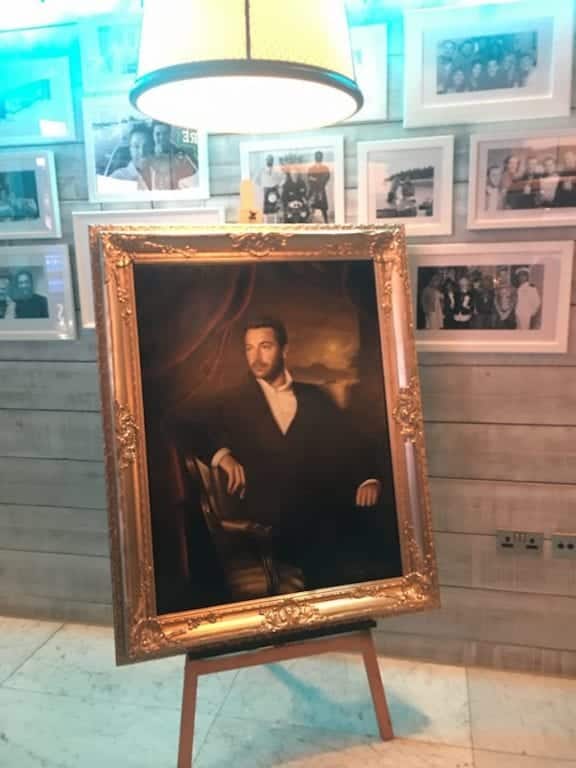 Whilst we wait, we tear through antipasto boards loaded with cured meats, cheese, olives and fluffy chunks of focaccia. More fizz is going round and in an effort to satiate the chef’s baying posse, the sommelier grabs the mic to let us know Gino will be here soon.

“Don’t worry, you don’t have to run after him – he’ll come to each of your tables for a picture and you can ask any questions you like,” he reassures us.

When Gino does appear, he cruises in all cool and casual. Later we discover there was an incident outside the Arndale and security wouldn’t let him in. Even celebrity chefs have to do as they’re told sometimes.

Dressed in a black, short-sleeved chefs jacket, Adidas trainers and his signature bandana, he looks casual and at home. But it’s not until we’ve completed the next two courses (lentils, cavolo nero and scallops followed by chicken cacciatore) that we get a chance to quiz him.

Post-chicken, there’s a rush to the other side of the restaurant as the Q&A is announced. By this point, everyone’s had a few glasses of wine and the atmosphere is relaxed and merry.

He’s got a chocolatier called Oli in for the night who steals the show somewhat by also wearing a black bandana, prompting a #whoworeitbetter moment.

“Can I ask you something before we start?” asks Gino. “Why have you got this silly bandana on your head? I mean seriously, you’re a grown man, that’s something children would wear, unless you are a rock ‘n roll star or a…”

“I’m a choc ‘n roll star,” replies Oli to cheers and applause. And so the banter begins.

Almost every comment seems to come with a risque double entendre.

They start talking about what Oli can do with chocolate. He says he can make anything – even David Beckham’s face. Somehow, a fan manages to bring Gino’s willy into the conversation but she’s soon quieted with a cry of “not my willy, darling, the face!”

The first question for Gino, perhaps unexpectedly given the palpable levels of adoration in the room, is a personal one. “Are you married?” asks an adoring fan.

Gino’s minders step into to say yes and that the questioner looks rather like his wife Jessica, who is also English and blonde.

In his flirty, charismatic way, Gino adds “Why do you ask me that?” But he knows full well why. It’s this allure that is at the heart of his brand.

To hammer the point home, he adds: “I don’t wear a wedding ring because in cooking it’s against health and safety.” A quick Google search, however, suggests this is not strictly true.

As he fields more questions about the new series he’s working on, his smooth-talking TV persona comes into full force.

He’ll be flying to Morocco in ten days, he says, for a new series coming in April. And he’s also working on something with Gordon Ramsay for the USA.

The next question is predictable enough. What’s the one ingredient he couldn’t live without?

“Olive oil,” he answers knowingly, adding after a pause, “A good bottle of olive oil you can do everything, literally”, drawing a knowing cackle from the audience.

And his favourite food, if he could only eat one thing before he dies?

“If I’m dying, whatever it is, it has to be something that’s gonna take a hell of a long time to eat,” he quips. “My ultimate dish is linguine with clams, linguine with spaghetti pomodoro. I can eat that pretty much every day.”

All too soon, the Q&A is over. But before we head back to our tables to try Oli’s chocolates, Gino lets us in on a secret.

See? Double entendres at every turn.

Q&A over, we go back to our seats to try Oli’s chocolates and dig into the last course of the evening – a generous portion of Gino’s rum baba.

The rum-soaked cake comes served on top of a bed of cherries with a healthy measure of whipped cream. It’s pretty delicious, actually, and goes beautifully with the accompanying northern Italian dessert wine.

Having had their fill of Gino, the ladies are content. Their partners, if they’ve been invited along at all, sit quietly. They know their place and they’re playing second fiddle tonight.

Without a shadow of a doubt, the This Morning regular is a real charmer. And his fans LOVE him. Almost an unnerving amount.

I guess he really is the nation’s best loved Italian.