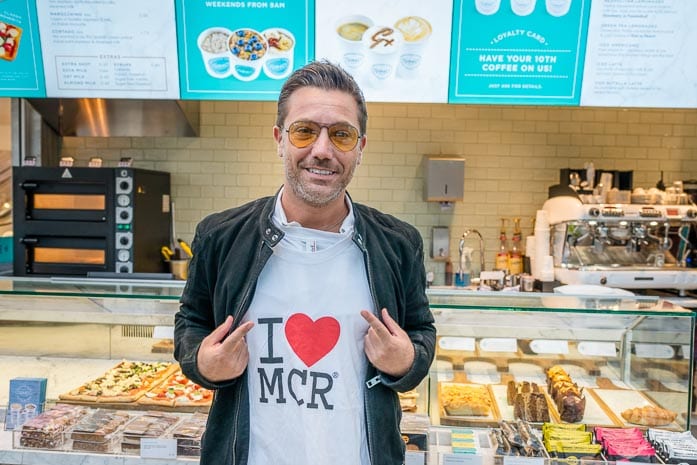 Celebrity chef Gino D’Acampo is a big fan of Manchester.

“The question is, who is the idiot who doesn’t want to open anything in Manchester?” he asks when I meet him for an espresso and a chat at his latest project in the city, My Coffee & Deli Bar.

“It’s the fastest growing city. It’s such a cool place. I come as often as I can. I love Manchester. Manchester was my first ever restaurant that I opened. When I first came 25 years ago, I knew it would be the city it is today. The people are very cool in Manchester. I’m a huge Oasis fan, and The Stone Roses. I love everything about Manchester. The way people talk, the way they walk…”

The new opening, which serves Neapolitan coffee and pizza, pastries, piadina and pasta to eat in or take away, is Gino’s first Italian fast-casual dining offer in the UK and his third restaurant in Manchester. 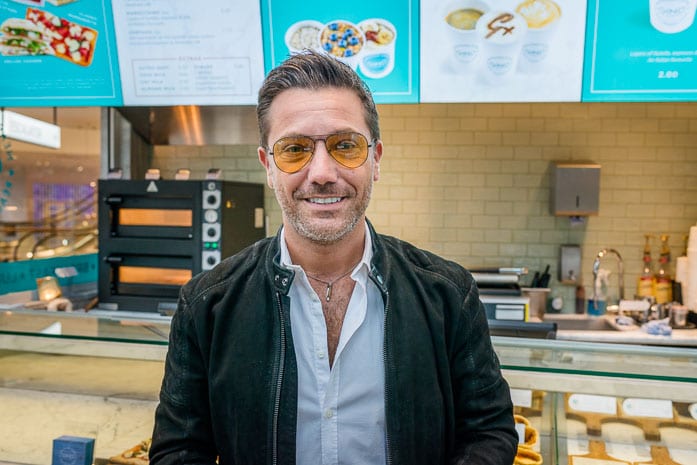 “As you know, I pretty much own The Corn Exchange,” he jokes. “I’ve already got My Restaurant and My Pizza & Prosecco Bar.

“But something was missing, and it was something faster. Everything here is fresh and everything is baked by us. It’s really fast. And you can order online via Gino2Go, too. It’s the last piece of my puzzle. It’s fast, it’s tasty, and it’s not expensive.”

Ingredients are imported from Italy, and Gino is keen to stress the authenticity of the dishes. Do we still make mistakes with Italian food in this country, does he think?

“The biggest mistake is carbonara – putting cream in it,” he says. “People add cream, mushrooms, ham, onions. Everything that just doesn’t belong in the dish. That’s the Italian dish that probably gets bastardised the most.”

Is that worse than pineapple on a pizza, I ask? Then I sit back and watch the torrent of animated rage I’ve unleashed.

“Oh, wow, you’re getting my heart racing now!” he exclaims. “Yes, I’m going to say that is the worst crime. I can go with someone adding mushrooms to carbonara, or maybe they want to put cream in. But I absolutely cannot go with the idea of putting fruit on a pizza.

“It’s just, no. It’s as simple as that. If you see any Italian restaurant offering pineapple on a pizza, it’s time to get up and get the f**k out of that restaurant. Straight away.”

He looks at his espresso. “I think I need a chamomile tea now.”

Gino is no stranger to the spotlight. He’s just finished filming Gordon, Gino and Fred: Road Trip, an ITV show which sees Gordon Ramsay, Gino and Fred Sirieix pack up their camper van and head off on a European adventure, each taking us on a tour of their cherished homelands.

“It was great fun filming,” he says. “We spent four weeks together. We went to Naples, where I’m from, and to Sardinia. We went to France and then we went to Scotland, which was amazing.”

Gino was crowned King of the Jungle when he appeared on I’m A Celebrity Get Me Out Of Here in 2009. What did he learn from the experience and what advice would he give to the new celebrity contestants going into the jungle?

“I learnt that I could lead a much better life without my mobile phone,” he admits. “I spent 21 days in the jungle with no mobile phone and I was thinking, ‘why can’t life just be as simple as this’.”

Gino’s grandfather was a chef and his three children have inherited his passion for food – or, at least, they’re not allowed to be fussy eaters.

“They eat everything,” he says. “But that’s because I don’t give them a choice. I just tell them, ‘This is what you’re having. If you don’t want it, fine, but tomorrow at breakfast it will be there again’. In the last 20 years they say children have become more fussy but it’s the parents giving them choice, because they don’t want to fight.

“And you need to push your children to try food more than once, too. I had a rule of making them try new food at least three times before I knew whether they really didn’t like it. As they get older, they change their mind and they change their palate. Don’t give up.”

Speaking of family, do Gino’s children want to follow him into the restaurant business?

“My son Luciano told me last month that he’s going to finish school at 18 and he wants to come into the restaurant business straightaway,” he says.

“I have two feelings about it. On the one hand, I’m very happy and I’m very proud. But I’m also worried. All these people I work with have earned my respect. And I hope I’ve earned theirs.

“What I don’t want to happen is that my son comes in and just because he’s got the same surname he’ll get a respect that he doesn’t deserve. Or that he will be disrespectful himself. It’s going to be a really fine balance.”

One thing is for sure, Gino isn’t showing any signs of slowing down. He has plans for more openings across the country. Does he still find time to cook?

“I still cook – but it’s in a different scale now. I cook for my chefs. I do still sometimes cook at home. But my wife Jessica doesn’t like it because I’m a messy cook. I hate washing up. So when I cook at home, in my mind it’s like having a restaurant. I leave a mess and think someone else will clear it up.  And then she looks at it and says, ‘and is anyone else coming to clean this up?'”

Does he have any more plans for Manchester?

“Yes, I’d like to become the Mayor of Manchester,” he says with a twinkle in his eye. Thing is, I’m not sure whether or not he’s joking.