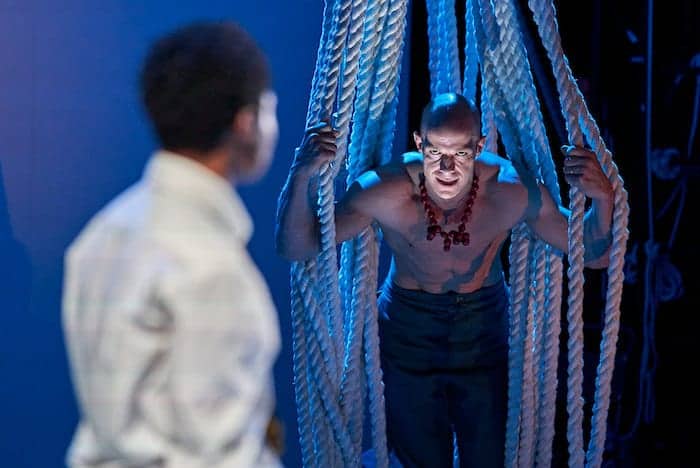 Patrick Ness’s beautiful exploration of dreams, grief and identity became a best-selling novel in 2011, and its journey to our bookshelves is interesting and poignant. Fellow young adult author Siobhan Dowd outlined the plot to her agent but sadly died of breast cancer before she was able to write it.

When Ness was first approached by his editor to write the book, he said no. But then an image from the initial idea came into his head, and like the protagonist, Conor, his imagination ran wild and A Monster Calls became as beloved as it is today.

A terrific film version followed in 2017 and now comes this stage production, directed by Sally Cookson, who is adept at taking literary works and transforming them into plays, as seen with her productions of Peter Pan and Jane Eyre.

Teenager Conor is struggling. He is bullied regularly at school, misses his dad who is living in America with his ‘new family’, he struggles to relate to his grandmother and her old fashioned ways, and he is not willing to process the fact that soon, his terminally ill mother will die.

He is bright, reflective and desperate to be seen, he feels invisible and feels that people view him as the boy with the sick mother.

Something wonderful, equally scary and challenging starts to happen just after midnight, as a booming voice calls him by his name and the world beneath him starts to open.

This is the father that he does not really have, the monster carries him through his lonely life and listens to his fears and insecurities. It offers him solutions to problems, but nothing is sugar coated or given to him on a plate.

Sally Cookson did not want puppets to represent the monster, which takes the form of an imposing Yew Tree, and this is a smart move. Instead, a myriad of ropes act as branches cradling the boy like Kaa the snake from Rudyard Kipling’s The Jungle Book.

At the centre stands Keith Gilmore, who strides across the stage on stilts, complete with a booming voice and stories which entrance the audience and the young protagonist. This is one enigmatic and versatile performer and he is both imposing and nurturing.

Ammar Duffus is excellent as the troubled kid who is torn between pause and fast forward. Either way, he knows he is either postponing the inevitable or saying goodbye to his mum way too soon, and to witness this is heartbreaking for the audience.

Maria Omakinwa is Conor’s stoic mum, who keeps things from him in order to protect him. Her best scenes are with Duffus, as they totally connect as a unit, and you believe that she is slipping away like sand through his fingers.

Kaye Brown as the boy’s grandmother has a haunted look throughout. She has seen things a mother should not see. She is watching her daughter die and rarely says what she feels, but it is evident through her body language and behaviour that she is grieving, silently.

The ensemble cast are on stage throughout, waiting to play a variety of roles, sat on different sides of the stage, giving a similar feel to the National Theatre’s production of The Curious Incident of the Dog in the Night Time.

Michael Vale’s set design is quite sparse and empty and for the most part this works, although the use of a white backdrop is so stark that it does remove you from the proceedings. At times and it would benefit from more colour to represent Conor’s vivid imagination. Projections are used, but not enough to take you away.

The Bower Brothers music is stunning and reminds you of the brilliant band Air. It takes you straight into a word that is both dreamy and frighteningly real, and the musicians are marvellous. Mike Beer’s superb sound design is crystal clear and helps bring to the life the many stages of grief, with real clarity.

Cookson’s production is filled with meticulous movement which explores loss far more than words, and Dan Canham’s work here reminds you of Frantic Assembly, it is that good.

A Monster Calls is not really for tiny tots, as it is very dark, but it also educates a kid in that it is okay not to be okay, as long as you talk about it.

Beautiful, bodacious, gut wrenchingly real but never grim, this is a dazzling piece of theatre which shows you that not all monsters are to be feared, if you face them head on.

A Monster Calls is at the Lowry until 29th February.