The polymer £50 will be issued for the first time on 23rd June 2021, which coincides with Alan Turing’s birthday.

While best known for his work devising code-breaking machines during WWII, Turing played a pivotal role in the development of early computers first at the National Physical Laboratory and later at the University of Manchester.

He set the foundations for work on artificial intelligence by considering the question of whether machines could think.

Turing was homosexual and was posthumously pardoned by the Queen having been convicted of gross indecency for his relationship with a man in 1952, at the time a criminal offence.

His legacy continues to have an impact on both science and society today, and he is commemorated in statue form in Manchester’s Sackville Gardens in the Gay Village.

The polymer £50 note, like the £20, incorporates two windows and a two-colour foil, making it very difficult to counterfeit.

There is also a hologram image which changes between the words ‘Fifty’ and ‘Pounds’ when tilting the note from side to side.

The polymer £50 note will join the Churchill £5, the Austen £10 and the Turner £20, meaning all Bank of England banknotes are now available in polymer.

The public will begin to see the new £50 from 23rd June 2021 as the notes enter general circulation, and can continue to use paper £50 notes as usual. Notice will be given at least six months ahead of the date when the old paper £50 is withdrawn.

“There’s something of the character of a nation in its money, and we are right to consider and celebrate the people on our banknotes,” said Gover Bailey.

“So I’m delighted that our new £50 features one of Britain’s most important scientists, Alan Turing.

“Turing is best known for his codebreaking work at Bletchley Park, which helped end the Second World War. However in addition he was a leading mathematician, developmental biologist, and a pioneer in the field of computer science.

“He was also gay, and was treated appallingly as a result.

“By placing him on our new polymer £50 banknote, we are celebrating his achievements, and the values he symbolises.” 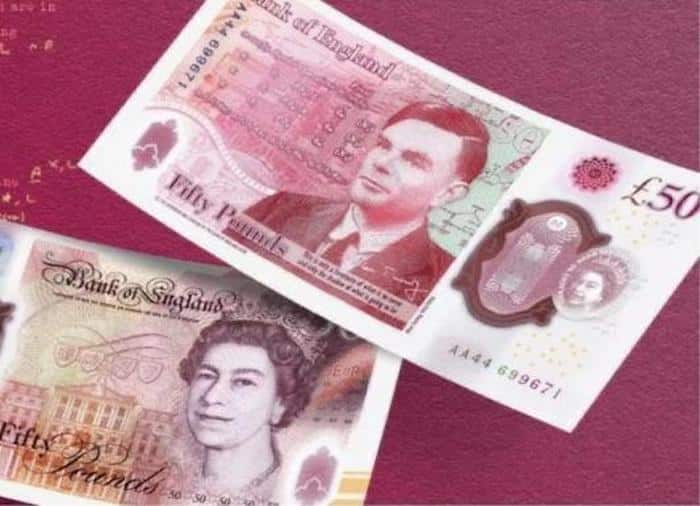 Alan Turing’s appearance on the £50 note is “a landmark moment in our history,” said director of GCHQ Jeremy Fleming.

“Not only is it a celebration of his scientific genius which helped to shorten the war and influence the technology we still use today, it also confirms his status as one of the most iconic LGBT+ figures in the world.

“Turing was embraced for his brilliance and persecuted for being gay.

“His legacy is a reminder of the value of embracing all aspects of diversity, but also the work we still need to do to become truly inclusive.”

The new note will feature the signature of Sarah John, the Bank’s Chief Cashier.

“This new £50 note completes our set of polymer banknotes,” she said.

“These are much harder to counterfeit, and with its security features the new £50 is part of our most secure series of banknotes yet.