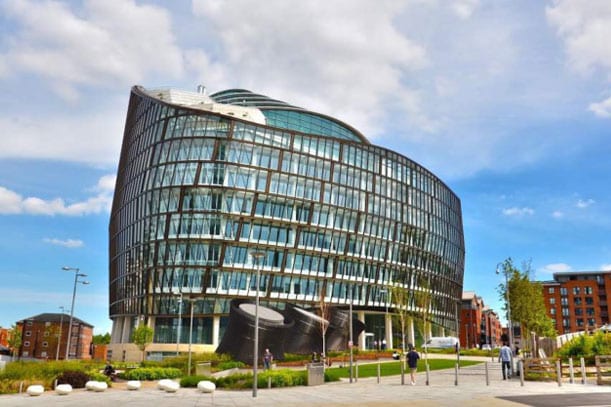 Located at One Angel Square in Manchester, the Co- Operative Group’s new headquarters has been declared the most environmentally friendly building in the world.

BREEAM, the industry experts when it comes to environmental ratings for buildings, awarded the new headquarters its highest ever rating.

Costing £100 million and constructed by BAM, the building contains a number of energy saving features; many of which have never been seen before. These features include:

Passive solar building design, allowing full advantage of heat from the sun. This is achieved by the building being angled so it gets the full benefit of sunlight throughout the day. The slanted design of the roof allows a greater amount light to reach the upper floors and atrium. This feature also helps save on lighting costs.

A rainwater harvesting and recycling feature helps to keep water usage down to a minimum.

3. Its own biofuel farm

Energy for the building is provided by biofuel harvested at the companies own sustainable farms.

Shades at the top of the building help to prevent heat from escaping in the winter and can be opened to provide ventilation in summertime.

The building itself stands 15 storeys tall and is situated on its own 20 acre site, which is set to be redeveloped in the near future. It will be home to 3000 head office employees.

Construction of the headquarters began in 2010, shortly after planning permission was granted. This ambitious building programme has led to a new, defining feature on the skyline of Manchester.

Officially opened in November 2013 by the Queen and Prince Philip, this building marks the beginning of a scheme to redevelop the northern part of Manchester city centre. The area is to be subject to £800 million worth of projects within the next 10 years, leading to the creation of a multifunction district.