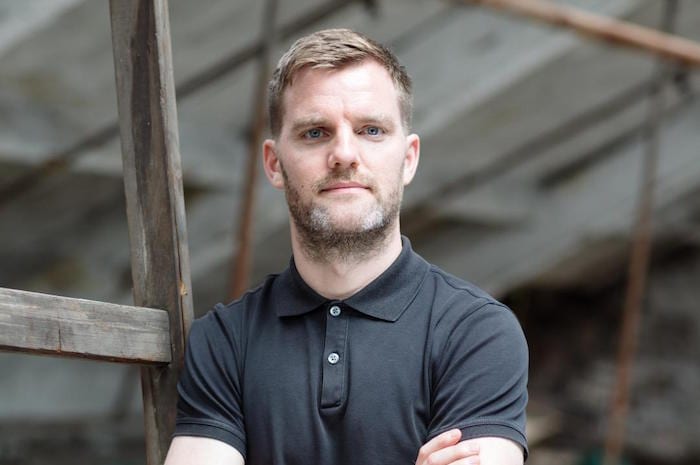 Tim Heatley, 37, is co-founder of Manchester-based Capital & Centric, one of the UK’s most innovative property developers specialising in revitalising iconic buildings. Current projects include transforming the massive 1867 Grade II listed London Warehouse in Ducie Street into Manchester’s first co-living concept. He recently told Insider magazine he’d be up for the challenge of investing in Wigan Pier.

He is also the chair of Andy Burnham’s Business Network, focussing on fixing the rough sleeping epidemic by the end of 2020.

He lives in Hale with his wife Sally and four children.

I was always interested in up-cycling stuff. I grew up in Salford and went to Manchester Met University. While studying, instead of getting a job, I used discarded art work from the art undergraduates, framed it and sold it. When I’d exhausted all of that, I bought old bangers from car auctions, gave them the shabby chic treatment and sold them on. I bought my first house with the proceeds when I was 21. It was derelict. I restored it and someone offered me almost double what it had cost me. I was hooked from then

My grandparents who came to Manchester as Irish immigrants and worked really hard despite having seven kids. And for as long as I can remember, my parents have always fostered adults with learning difficulties. They still do and it takes a huge amount of patience and hard work. Its a reminder that, as we grow as a city, our success should be judged not only on what we’ve achieved but what we’ve helped others to achieve. That’s the Manchester way.

In terms of my career, there are lots of individuals and colleagues that have influenced me, especially from a architectural and design perspective. The emphasis on creative and innovative design is what really gives Capital & Centric its focus.

I’m proud of the team at Capital & Centric. It was founded with my business partner Adam Higgins at the start of the 07/08 recession and we’ve grown to spend £2m a week on regeneration.

But I’m most proud of what its enabled me to do – setting up Regeneration Brainery which is a-not or-profit platform for bringing young adults – especially from disadvantaged, black, Asian and minority ethnic backgrounds – into the property sector. As a sector we’re really under represented in those areas.

We’ve restored some amazing and important listed buildings in Manchester. These mill buildings and warehouses were constructed by our ancestors who grafted day and night. This has left us a legacy of a big city with beautiful buildings. I get a sense of pride in preserving a piece of our heritage.

A recent high point was purchasing the MMU Aytoun campus where we’re creating a £250m new neighbourhood but keeping some buildings that date from 1800s through to the 1960s.

I’ve got four kids ranging from one to seven years old, so I get them breakfast and try to clear off before it descends into chaos.

If I’m all up-to-date with colleagues, I try and make myself useful by doing a brew for everyone or loading the dishwasher. To some extent my role is to come up with ideas as to what we do or how we could do it.

Some afternoons I may have some external meetings with local government, councils and architects to discuss new regeneration projects. I also may go and view derelict buildings and abandoned land to asses if they’re a suitable new project for us.

I like to get out and about with my wife Sally and the kids. Over the weekend I’m never in the house beyond 9am. I can’t sit still and like to be up to something. I’ve just got back from a week snowboarding. That’s my favourite sort of holiday.

Work hard and be nice to people. Its simple but I think that’s why it works. We can all overcomplicate our lives and I’m no different. This is an easy way to make sure I know what to do each morning.

I studied Law at MMU but I quickly sussed I was going to be a rubbish lawyer. I think I’d fit in well in a creative industry such as a product designer.  I admire people like Jony Ive and Tom Heatherwick who have created products for a world stage.

I used to be a TV extra. I had some speaking roles on things like Hollyoaks. I once played the part of a protester on Coronation Street‘s red rec, campaigning against property developers building on it!

I’m not a big footy fan. I take my two sons to Old Trafford every couple of months and I love the atmosphere and experience. I don’t watch it on the telly though.

I lived in the city centre for 10 years so I’ve got lots of favourites. I like the graffiti and bars on River Street. We started a family and lived there with two kids so that’s always going to be close to my heart.

I like the railway arches and the fantastic businesses that operate out of them. We work with some of them such as furniture designer Jon Male. It also gives places like Track Brewery, ManCoCo Coffee and craft bakery Pollen somewhere to continue Manchester’s independent spirit.

Manchester is a global city with community spirit. We’ve proved that we come together when needed the most.  Yet so many of Manchester’s vulnerable people are still sleeping on our city’s streets.

The public sector and charities are leading the charge but Manchester’s private sector will play a pivotal role too.  Hopefully they can apply their talents to transform the lives of our people without homes.  It’s a big ask, but one I’m sure we’re capable of.

Its the kind of place that, if you’re up for it, you can achieve anything. The people of Manchester will help you get to wherever you’re going so long as your intentions are good.