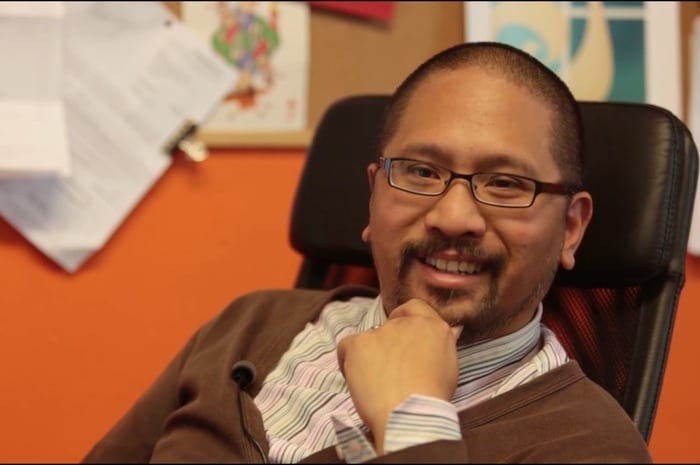 After studying at Swindon College of Art, Stanley Chow worked for a time as a club DJ, including for me in the early days at The Bay Horse. In 2007 his illustration career took off when his art was spotted by Meg and Jack White (The White Stripes) who went on to commission his work for their limited edition album, Icky Thump, for which he was later nominated for a Grammy Award.

Much of his vector-based work on Illustrator is portraiture and represents celebrities from popular culture. His simple yet bold style manages to convincingly capture their character, and is now widely recognised, with numerous personal projects including past and present Manchester United players. As an English-born Chinese man in Manchester, he has designed the branding for the Chinese New Year for the past four years.

In 2014 he lectured for Lego in Billund, Denmark, explaining how he manages to get so much character in his simple illustrations with so few lines. The following year he was presented with his own Lego mini figure of himself which he had designed. Other clients include Saatchi & Saatchi, McDonalds, WWE and The New Yorker magazine.

I was always good at drawing from a young age. Growing up in my parents’ chip shop I was often stuck in the back drawing. They couldn’t afford to buy me many toys, so I just had pens and chip paper. Through school all I ever did was doodle all over my exercise books. It was like an obsession, part of me.

My family always encouraged me. As a second generation Chinese boy, the cliché for them would have been to push me to be a doctor or a solicitor, but my parents never did that. They always accepted the fact I was an artist. And through school my biggest influence was my art teacher, Robin Hidden. I was quite a slacker, the worst in nearly every subject except art. He saw some talent in me and really encouraged me. He gave me the confidence I needed to fulfil my ambitions.

Quite a few. Personally – getting married, having kids and buying a house. That whole package I can’t quite believe has happened. Being nominated for a Grammy Award. When Apple’s chief designer Jony Ive bought a print off me. And I got slagged off by Donald Trump last year when he was interviewed in The Washington Post – I did a pic of him for the cover of The New York Times magazine and he wasn’t happy with it. That was a proud moment.

I’m up by half seven, I feed the kids and then come to my office Monday to Friday. For the first hour I will run through my emails and do all the admin stuff. I always give myself a list of what I need to do by the end of the day and I only leave once they are all done. If I’m not working on a commission for a client, I have my own personal projects I’m working on. I like to be home for about half six, but often it’s not until about eight.

I watch United play. I’m a season ticket holder. I watch films. I hang out with the kids and I like to cook for my family.

The mantra I work by is be spontaneous and be simple. But if it’s simple it has to be the best. Mastering simplicity is what I strive to achieve.

I could have ended up DJing for longer but I had reached a crossroads. Although I was making little money illustrating, it was more important to me so I went full-time in 2006. I suppose I could have carried on the family Chinese takeaway business.

I’m definitely very predictable. I used to be a singer in a band, Fluffy’s Nephew, like a pop punk band but we only did about three gigs. And I managed a band called Valve. My aim was to get them a record deal, which I did. But after the EP came out it all went a bit pear-shaped

On a sunny day I like The Britons Protection beer garden. For lots of reasons. I had my stag do there, and I’ve had lots of good evenings in their back yard. I used to like to watch all the skaters on Corn Exchange Square but it’s not there anymore. And Night & Day Café was a constant for me growing up. It felt like a place for outcasts and I felt like an outcast. People with no mates became mates. I met half of my friends there. If I wasn’t married with kids I would still be there now.

It’s growing. It’s really maturing. It was stagnant for a while but now it seems to have everything. Since the IRA bomb the amount of money invested has made Manchester a world class city. A city that people want to come to and stay. I like that.