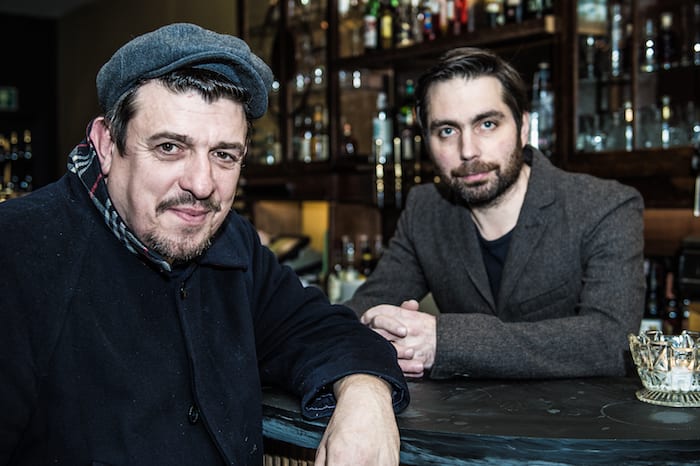 Jack of all trades and master of none is how I would actually describe Luke, who finally turned up for our interview an hour late. I’m not being cheeky as we go back donkeys’ years, but he did struggle with his job title and didn’t want a list. One half of the Unabombers with Justin Crawford, the pair can take credit for some of the best underground club nights Manchester has seen.  Luke may be busy organising their yearly Electric Chair End of Year Riot but, let’s face it, what has to be the launch of the year and the place on everyone’s lips is Refuge by Volta and yes the duo are responsible for that too.

Having forayed into the world of bars in 2009, they opened Electrik in Chorlton, with Volta following four years later in West Didsbury. Volta focused more on the food, serving small plates influenced by their travels. This menu remains at the core of Refuge, just on a much bigger scale. The setting is stunning and the refurb impressive, yet it still remains accessible and inclusive with ‘Come As You Are’ their tagline aimed at a non-resident majority.

Born in New Delhi, Luke arrived in Manchester to study in 1986 via Essex and Sheffield and after thirty years his enthusiasm for the city hasn’t changed. He had a thing or two to say when we meet in the bar at Refuge.

Moving here was a big catalyst. I came here for the music, the people, the politics. Manchester was a militant, proud, stand alone city. I loved that whole era of house music from 1985-86, my introduction to the Hacienda in 1987, and also gay clubs like No. 1 and Flesh, feeling relaxed as a straight man in the gay village. This amazing city made me want to belong. Students never left then, and I just stayed too. I wanted to be involved. No plan. Getting started in music and clubs was a reflection of everything I had soaked up.

Who has been the biggest influences on your work?

My parents. They were both working class but liberal and educated. Decent people. Positive, kind, and with no snobbery or prejudice. Their warmth inspired me. And my business partner, Justin. We go back thirty years and he is still a huge influence. His understated non-showing off. He is wiser, calmer and methodical. And a talented musician. We are like yin & yang and everything we have done together is down to that relationship. And house music was like nothing I had ever heard before, with a whole culture and attitude, where you could lose yourself for a night.

Because I’ve always burnt the candle at both ends – not dying before I’m fifty! Music wise, Electric Chair has meant so much to both of us. And obviously this place [Refuge}, it’s like nothing else we’ve ever done before. I’m very proud but it’s still early days so we will have to see how it goes. It’s good to see people’s reactions when they come in for the first time.

I get up about half six and walk the dog. Me and Justin are both doing about a hundred hours a week at the minute. We can be here from early morning to late night and work every day of the week. We used to think we were hard pushed when we had to DJ more than three nights in a week. Little did we realise then how easy we had it. Those were the golden days. But I love it. It’s a multi-faceted job and full day of menus, promotion, staffing issues, tasting, drinking, meeting people – we do everything! And Electrik and Volta need some TLC too. It’s relentless but exciting.

I see my missus, the dog and the family. Drinking. Eating. And I love to travel although at the minute I can only fit in short trips to Europe. I love cities, and prefer them to the beach. I recently visited Lisbon and loved it there.

Sometimes the things that seem the most trite are generic and true. Live life to the full, treat people well, take risks, and be happy. Live life now has to be fundamental and don’t try to be the richest man in the graveyard.

I’ve tried everything and I would always have done something. As long as creativity was at the heart of it. Maybe involving travel. And hard work.

After 36 years of hedonism and clubs, there’s nothing better than staying in and watching X Factor. I attack it on Twitter frequently but I love it really.

Oxford Road is my favourite road in the world from being a student here. It’s always in my dreams. The Northern Quarter midweek still has that rawness and creativity but you have to pick the right moment to go. I lived there for 23 years so maybe Tib Street on a Thursday night at 7pm. And the Curry Mile. On summer nights there’s lots of bustle, action and blue smoke. Antwerp Mansion is like a hidden Scooby Doo house and you can get your hair done until 1am.

It’s a community and people know each other. They make more of an effort. It’s a city but it feels like a town.