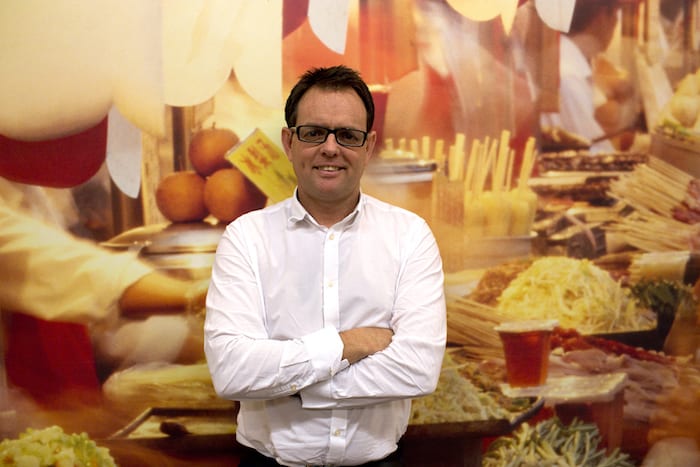 Yorkshire-born David Fox launched his first Tampopo restaurant in Albert Square in 1997 in an attempt to recreate not just the flavours and smells of the street food he had found on his travels in south east Asia, but the informality in their style of dining, and all the subtle differences each country, and region, had to offer. Thai, with its hot, sour, sweet and salty flavours; Vietnamese, slightly more delicate and light; and Malaysian, with a more Indian influence.

He chose Manchester as he felt it was more receptive to new ideas than any other provincial city, especially with the cultural mix here. Nearly twenty years on, there are now three sites in Manchester – Albert Square, Corn Exchange and Trafford Centre, with a fourth  in Fitzrovia, London.

He is currently promoting Tampopo Supper Clubs. “A lot of customers come to Tampopo and order the same thing, Pad Thai being one of our clear bestsellers. We wanted our guests to have the opportunity to try many different flavours over the course of the evening.”

The next Supper Club is Malaysian on 15th November.  It’s a five course grazing menu created to give diners an informal experience of dishes they might not normally try. For just £22, with a regional cocktail on arrival, they are a great way to try Tampopo and all that their south east Asian-inspired menus have to offer.

The idea came from travelling and my desire to bring back the food I had come to love. That’s what got me going initially. I was working in London as an accountant and thought if I don’t leave now I never will. I knew 80% of restaurants fail in their first year, so I thought I’d either go bust or be rich, neither of which has happened.

Within the industry there have been a lot of influences, but the main two would have to be David Chang and Alan Yau. David Chang was very innovative in New York, in terms of making casual dining, not high end dining, more popular and accessible. And Alan Yau founded Wagamama, but not as many people are aware he has also opened other restaurants outside of that group, high end places, Italian, crossing cultural and dining styles.

Growing people within Tampopo. People underestimate how much hospitality can be a path to a decent career, and a route to opportunities that they may never have had. It can be perceived as hard work for low pay but with the right attitude it’s such a positive experience. When we first started, we had a kitchen porter who had been working in a kebab factory for £2.75 per hour. He went on to train as a chef with us and now works as a top chef in a hotel. This industry and the teamwork involved are a great source of self-esteem for many.

I get to all the restaurants as much as I can. Having learnt to cook many south east Asian dishes in cookery schools I took out there, I am able to step into the kitchen and cook on the small plates section for a few hours. Everyone forgets I’m there after a while and I can support the team, and it’s then I really see what’s going on, how we can improve and evolve. There’s also a lot of meetings with my site managers, menu development, social media and online promotion and expansion. I can work most days of the week and put in a lot of hours but I’m still there for my young family as my time is flexible.

I like to cook at home, play five-a-side footie and hang out with the family. My four kids keep me occupied. I also enjoy going out in Manchester, having a boogie when I can. I love the fun element to the city. I’m a naturalised Manc and we don’t take ourselves too seriously.

You have to listen. Not looking for what you want to hear from your team, suppliers and customers, but actually listening. It achieves so much. I also like Steve Jobs ‘stay hungry, stay foolish.’ Hungry to do better, to be better, but not taking yourself too seriously

If it hadn’t been for the IRA bomb in 1996, I would probably never have found the site on Albert Square. I had been offered an accountancy job in Jakarta so I would probably be doing that over there.

Me and a group of friends danced for twelve hours solid at Festival No 6 this year.

Neither. I’m a Leeds fan although my son’s a Blue.

The Refuge as there’s nothing else like it. I like the fact they had the courage to bring in a couple of local lads as they provide a vibe in Manchester that is there but hasn’t been represented like this before. Albert Square – the council are great at utilising the space and there’s always something happening, whether it be the Food & Drink Festival, Manchester International Festival, the Christmas Markets or the Jazz Festival. Such a great events space and a great vibe when eating and drinking outside there. And Manchester Art Gallery, where so much of the work reflects Manchester’s history. I love the paintings by Adolphe Valette and would like one of those if I ever left here as a reminder. The familiarity is astonishing.

The never ending building work of tram extensions. It will be incredible once it’s finished but the last three years have been a nightmare. It also depresses me Manchester is so anti-car. It puts people off coming into the city. It’s easier to park in London than it is here.

The why not attitude. The fact we don’t take ourselves too seriously. And the healthy bickering. There are cultural differences with bickering. Other cities are so much more reserved whereas Mancs don’t give a XXXX. Just look at Coronation Street and the Gallaghers. One song sums it up for me – Fools Gold. There’s beauty on our doorstep, but it’s global in reach.