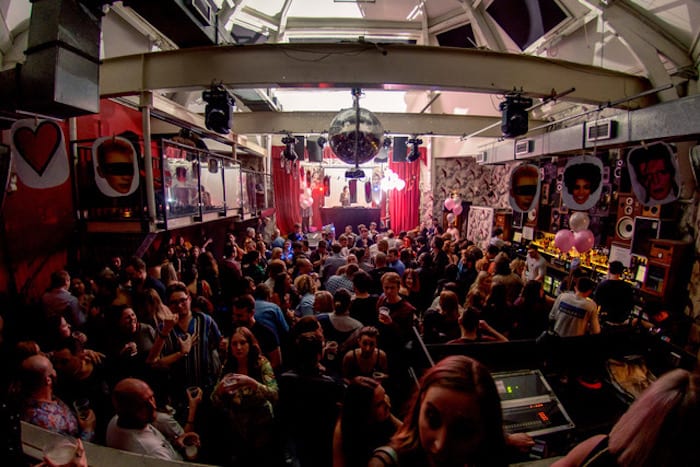 It’s been almost ten years since a former Victorian institute for deaf and dumb people was transformed into a three floor party place complete with bars, a music hall and a marvellous kitchen.

With its stone front, archways and statement staircase making it seem almost gothic, The Deaf Institute seems an unlikely place for a party.

But the Victorian Grade II listed building built in 1878 has welcomed the likes of Jarvis Cocker, Florence and The Machine and Johnny Marr.

Now the hotspot off Oxford Road is gearing up to celebrate its 10th birthday with ten very special events.

As if the historic interiors – especially the fabulous wallpaper – and its sweet shop-inspired cocktails and awesome, largely vegan menu weren’t enough, the birthday celebrations will run across July, August and September.

Carrying on with the TV and film theme is an Alan Partridge P- AHA – TY on Friday 3rd August, when the building will be transformed into a ‘ruddy lovely’ party palace dedicated to Norwich’s most famous son.

For a great club night party piece, Derrick Carter will play an extended set all the way to 4am in the renowned music hall. There’s set to be a series of special guests too, so keep your eyes peeled. The partying carries on with a great guitar-style rave from Gypsies of Bohemia, with an evening and matinee show on Sunday 12th August, too.

The Deaf Institute has been at the forefront of the non-dairy revolution in Manchester since 2016 when it launched its first full vegan menu as part of its Vegan Hangover Sunday special. The vegan offering now makes up over 60% of the regular daily menu.

And on Sunday 19th August, there’s a chance to get your hands on some great grub at a special Vegan Market featuring independent vegan food, lifestyle and vegan product traders.

The Deaf Institute is also recognised for its celebration of arts and culture, with the ground floor walls decorated with local artworks throughout the year. Launching on Thursday 23rd August is a photo and art exhibition including poster art and fan shots

More music? There’s a gig from Liam Frost & The Latchkey Kids on Saturday 25th August, whilst one of the oldest Deaf Institute club nights is coming back for a 15 years of El Diablo’s Social Club special on 14th September.

And the tunes don’t stop there. You can carry on celebrating thanks to Stay Fresh Fest on Saturday 29th September. This a band fest across two floors of The Deaf Institute with live music and plenty of fun from some of the very best artists in the north west

“After 10 years of serving as a springboard for the best new acts, whilst bringing the most outrageously fun new parties and club nights, this year we thought we would let our hair down and celebrate a summer listings of sweet, sweet parties symbolising our 10 years of existence in Manchester,” says programming manager Ciarán Cullen.

“We would like to thank all of our wonderful customers that have come through our doors and spent their hard-earned cash on tickets, food and drink. Boy, we’ve seen some sights!”

We bet you have, Ciarán.