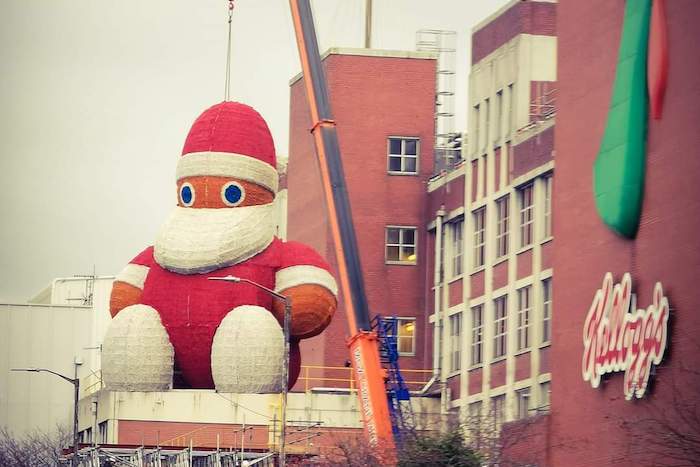 He was retired by council bosses as Manchester’s giant Father Christmas mascot this year – but you just can’t keep a good Zippy Santa down.

For the giant Santa model, nicknamed Zippy for his likeness to the classic Rainbow children’s TV character, has made a shock comeback at a NEW Manchester location this weekend.

The rotund red Zippy Santa, who was retired by council bosses from his customary position at Manchester Town Hall this year, was winched into place outside the Kellogg’s cereal factor at Trafford Park on Saturday afternoon – to the surprise and delight of passers-by.

Photos of Zippy’s new location were swiftly circulated on social media over the weekend, which was abuzz with the unexpected return of a city icon.

Kellogg’s are yet to make a comment about their surprise acquisition, but it’s certainly meeting with widespread public approval.

In a rather nifty bit of scene-stealing, Zippy Santa has made his comeback before the new Father Christmas model has even managed to make his debut in the city centre.

For the newly-commissioned MCR Santa model has been delayed in taking up his new position at Piccadilly Gardens, although town hall officials have said it should finally be ready to be unveiled “early next week”.

Traditionally, the large public Santa has been unveiled at the same time as the city’s big Christmas Lights Switch-on event, which this year took place at a new location on Cathedral Gardens on Thursday, November 14th.

But there’s still been no sign of the new Santa.

Meanwhile, it is understood that Kellogg’s bosses are planning a big switch-on ceremony of their own this week to celebrate the arrival of the iconic Santa at the Trafford site.

And it has been revealed that the council brokered a very special deal with Kellogg’s over the transfer of ownership of Zippy – that sums up the very spirit of Christmas.

City centre spokesman Cllr Pat Karney told I Love MCR tonight: “There is not a big market for six tonne Santas, so we are pleased that Kellogg’s took ownership of Zippy Santa.  In return they will provide Kellogg’s products for our food banks.”

READ MORE:  See Manchester Santa in all his incarnations over the years