You Have to Suffer For Lots of Things in Manchester. But It’s Worth It. 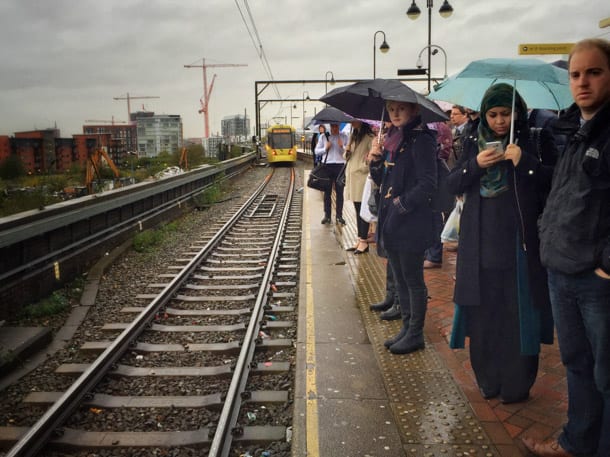 Each week photographer Simon Buckley visits a different part of Manchester for I Love Manchester, exploring what makes this city such an extraordinary place to live and work.

The website “I Love Manchester” was conceived after the riots a few years ago, when the citizens of our city came together to rescue a situation that felt at odds with the culture of Manchester, and people were rightly lauded for their strength of purpose as they worked to make good the damage done. Another indication of Mancunian resilience could well be the commute through Cornbrook Metrolink station.

Cornbrook, just outside of the city centre, seems to have developed something of a mythical status amongst those using the tram to get to work. I often listen to friends recount “the change”, as they wait for connections in the bleak rain and punishing winds that drive across the platform, their experience not exactly enhanced by the elevated view of below and beyond, where the vast sky lessens high rise buildings, and the streets are cluttered with relics of old industry and tatty vegetation.

This station has been placed on an old railway route, above bricked arches recently used as car repair workshops, and it draws the whole of Manchester through it, from the suburbs of Altrincham to the hills of Oldham. As the doors open, folk strive to get on and off the station, as the steady tram briefly pauses after its chunt up the hill towards Castlefield. Everyone huddles under the roof to stay dry, like sheep under an ancient oak. 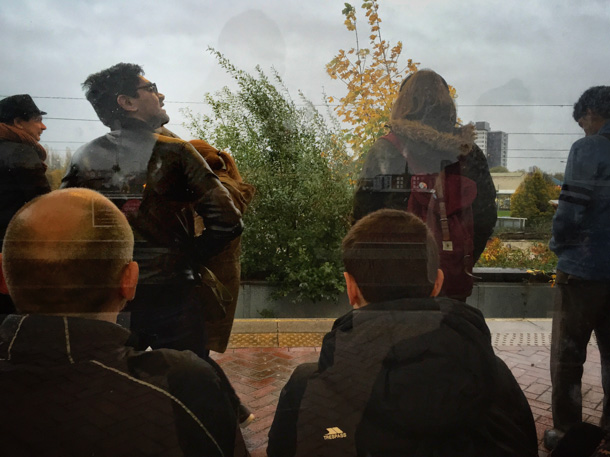 I’ve always worked for myself, so I know as much about commuting as I do about a language that I’ve dabbled in to avoid starving, or upsetting the locals whilst on holiday, which made the scene before me fascinating. I wondered if Lowry would have painted the silhouetted workers at Cornbrook?

On the surface there is nothing unusual. And yet, as the rain spattered down, I could see as much life in this small area as I could if I’d taken a microscope to a patch of woodland. A young man with his guitar stood solemn as a sworded knight, a group of schoolgirls, one with shocking pink hair, broke out into pop songs whilst they waited, people read thick books to enrich their souls and a pale woman, who had nearly fainted, was guarded and fussed over by caring fellow passengers. 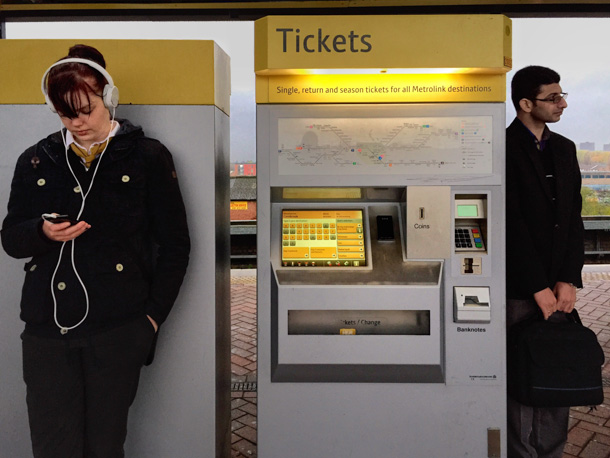 The crowds slowly thinned as the clock turned past nine, revealing my ex father-in-law waiting patiently. It’s that kind of place, where you bump into people you know. I hadn’t seen him since his daughter had upped and left me over a year ago. We shook hands and I explained why I was there, in the cold and wet. “You have to suffer for your art” he said just before we parted. You have to suffer for a lot of things in Manchester. But it’s always worth it.