You Can’t Stop the Beatniks 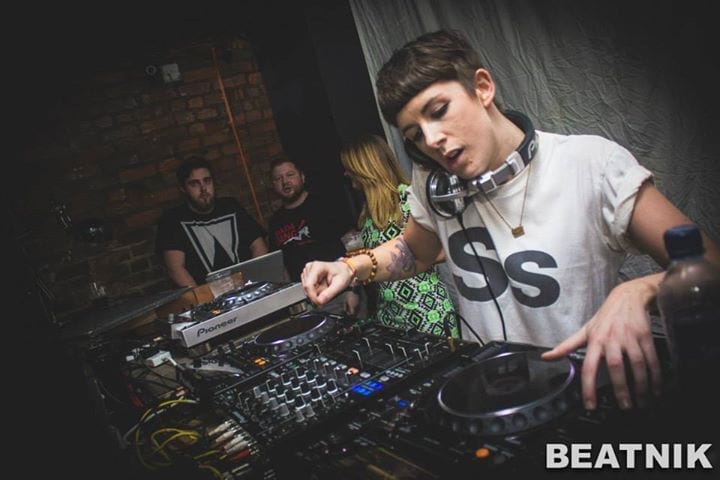 The inspiration of Manchester is the design behind ‘Beatniks’, a music event and fashion brand which brings a fresh new look for those of us looking for something new in Manchester’s nightlife.

So, in-between the masses of bank holidays, I decided to go down to Beatniks 1st birthday at Joshua Brooks to find out: did it really did live up to the hype?

Beatnik was the idea of Sophie Jarvis, who created the idea while hosting a number of boat parties in Manchester over the last 8 years and spending summers away in Ibiza.

I have to admit that on entering the club, one of the people in the queue said to his friends ‘it’s going to be an EPIC night’ a word I’m not too fond off but a great sign all the same. For those of you who been to Joshua Brooks lower basement, it doesn’t get the recognition it deserves. 16ft high brick archways, corrugated iron stairwells and a stage area make you think you’ve taken a slide down the rabbit’s hole from Alice in Wonderland. It’s surprisingly spacious.

As the doors open, you’re met with a great sound from the warm up DJs, a collaboration of fashion styles and all over feel-good vibe. It not pretentious like so many offerings on a Saturday night and makes you feel very welcome.

The headline DJ tonight is Yousef. Originally from Liverpool and now well known throughout Europe, UKN founder of Circus Club and signed to Cocoon Recordings and Carl Cox – not to mention a Space Ibiza resident – Beatniks certainly delivers on big names with that taste of Ibiza! The name speaks for itself.

“I was always going to other peoples parties and I thought – we can do this equally as well if not better,” Sophie tells me.

“What we are trying to do is create something equally as amazing as our big competitors like WHP and Sankeys. I, myself, don’t like these big venues with 1000’s of people but do still enjoy going to clubs. So I guess I’m trying to bridge the gap between the two by bringing world class artists to a small venue with some really good up-and-coming local talent too.”

Whilst exploring the night, the stairwells at the entrance and rear of the venue take you upstairs to a more chilled area with an electric disco ‘Studio 54 vibe’ with a twist of underground beats, and leads onto an outdoor balcony to catch your breath before returning to the underground party.

Asking the opinion of my fellow patrons, I asked ‘what made you come tonight?’

“It’s fresh, it’s new and it’s not trying to be anything than what it is. When I come here it’s comfortable and there’s a nice vibe. My friend comes here and she raves about this night, and we’re here without fail. There’s no pretence – the atmosphere’s great.”

Going back downstairs just before Yousef came on, we had time to take in the crowd and our surroundings. There was a fantastic mix of people, interacting with each other and having a good time. Fashion-wise, there were a number of interesting combinations: cool couture, northern street-wear and even one dedicated fan who had ‘Beatniks” iconic Isosceles Triangle shaved into the back of his head.

There was a eccentric, electric group of people here. On the dance floor you could feel a progressive beat, unifying the crowd where everyone felt like a dancefloor partner. This night differs because it’s made personal, everyone’s a part of the event and with the likes of Cause & Affect, Edu Imbernon, Russyallop – not to mention the residential DJs – the music reflects that of world class acts whilst keeping the atmosphere intimate. An unusual yet enjoyable combination, reminiscent of ‘Tramp’ at the Beer Keller (for those who remember) under the arches at the Warehouse Project, and various nights at Legends.

But its not just the music that makes up the ‘Beatniks’ brand. They have the ‘Big and Bold’ clothing range too.

“We are trying to build one brand between both ‘Beatniks and Beatniks fashion’ as I feel fashion and music work really well together,” Sophie explains. Taking their inspiration from Manchester, ‘Beatnik Fashion’ “came from the same sort of thing, really looking around and seeing street art, tattoos and music that surrounds us in the city. We look to stand out from the crowd and to turn people’s heads by what we wear and how we wear it. Creating a statement with our BIG and BOLD collection, we hope to have achieved that in our first collection. We want Beatnik to be in the forefront of the creative community. We bring the inspiration of our city to our designs and parties.”

For a first birthday party the elements that stood out for me and would make me return was the music, venue but most of all atmosphere. There are few good ‘original’ nights that are still going in the city from when they first launched, and it would be great to be celebrating the 10th anniversary of this brand in the future.

With the clothing brand now appearing in boutiques in Manchester, Sheffield and working on their first store over seas not to mention on ASOS (see details below), I think Beatniks, with the right direction, will achieve that longevity of its competition.