The benefits of adopting a vegan diet and lifestyle will be celebrated on the streets of Manchester like never before this weekend.

Go Vegan World, the world’s largest and longest running vegan campaign, has been spreading the animal-free message around Manchester in preparation for Vegan Education Day on Saturday. You may have seen the large format digital screens at The Printworks and the Arndale and posters across the city and on the sides of taxis and buses.

The award-winning campaign to encourage people to think seriously about the ethics of continuing to use animals as food, clothing, entertainment and research is being run by the Eden Farmed Animal Sanctuary in Ireland and is part of an international campaign currently touring the UK.

On Saturday, you can experience what life is like for the animals we use as food, sample vegan food, and learn about the impact of animal use on human health and the environment at the Go Vegan World gazebo on Market Street.

Campaign director and Go Vegan World director Sandra Higgins will be on hand to discuss the campaign and to show people how easy, cheap, convenient and enjoyable it is to live vegan. 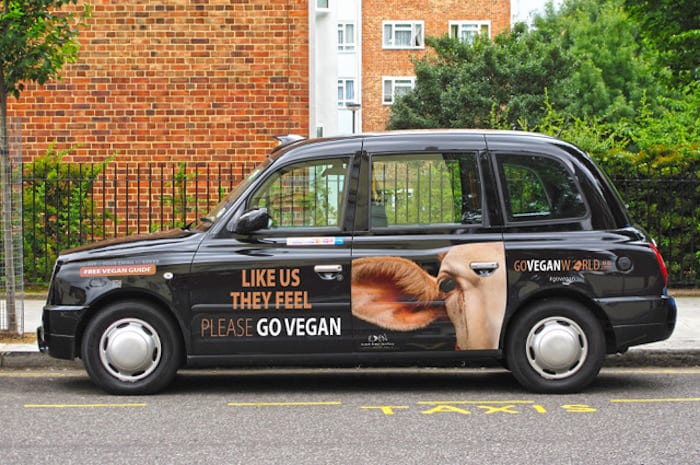 “There is substantial research that demonstrates that other animals share the human capacity to be consciously aware and to suffer,” says Sandra.

“Breeding them for our use and taking their lives is unjust. Even when the best of welfare standards are adhered to, they face rights violations and control by humans throughout their lives and death at a slaughterhouse at a very young age. It is impossible to regulate something that is inherently unjust. Not one of us would be willing to swap places with the animals we use.”

Manchester is no stranger to an animal-free lifestyle.  In 1808 the Reverend Cowherd formed The Bible Christian Church in Salford, advocating a meat-free diet. This contributed to the formation of the Vegetarian Society in 1847 which met regularly in Manchester. 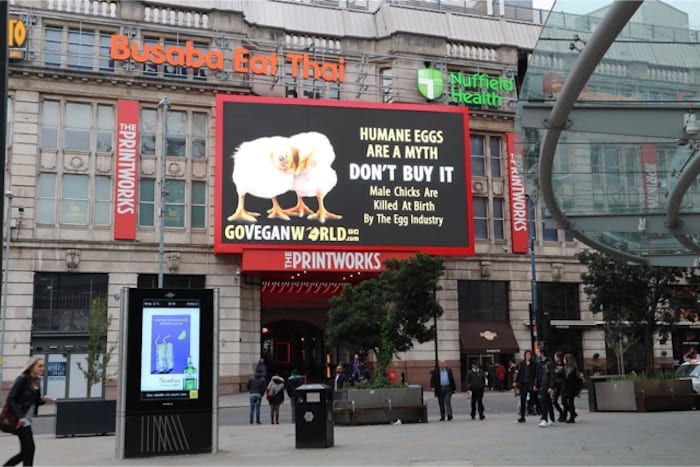 And there’s increasing demand for vegan food in Manchester if the many innovative venues across the city are anything to go by – a record store turned vegan junk food joint on Edge Street you may know as V Rev; a vegan café and wellness centre in Affleck’s; monthly GRUB Food Fair’s extraVEGANza street food at the Alphabet Brewery, whilst a vegan dessert bar, Ice Shack, opened in Withington earlier this month.

South Manchester vegan grocery Unicorn has been named one of the best food retailers in the country. And this year’s Northern Vegan Festival is bigger than ever, expanding into Manchester Central (GMEX) for a whole day of events. It seems Manchester really does have a great vegan vibe.

“Most people are pleasantly surprised to find that it is easy and enjoyable to be vegan, especially when motivated by our deepest values of justice and fairness,”  says Sandra.

With a growing body of research showing a switch to a vegan lifestyle would benefit the environment and human health and help alleviate world hunger, why not find out more on Vegan Education Day?

Find out more at www.goveganworld.com