The all-new Mercedes-Benz A-Class is aiming to be a class leader in the premium family hatchback options.

The five-door Mercedes-Benz A-Class is bigger than its earlier models in almost every way. It’s not just trying to ‘have it large’ for no reason – it serves a purpose. Because Mercedes-Benz have listened to their audience.

Firstly, it’s much more spacious inside – an area in which the A-Class has been on the back foot against its key rivals over the years. And secondly, they’ve given it a proper beastie look. Sexy.

The rear doors of the A-Class are also larger, which should make getting in and out of the car more dignified – and less like a Crystal Maze challenge – than it was previously, and there’s more space for your luggage in the boot. 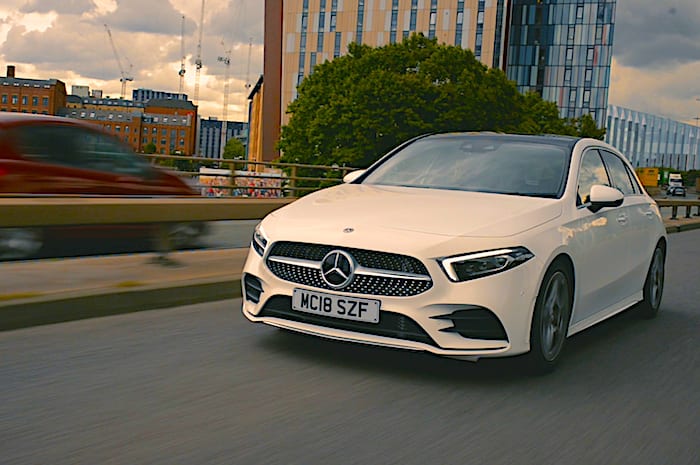 The biggest changes for the new A-Class are inside, where it now has the same dual-screen infotainment set-up as the E-Class and S-Class. Two 7 inch screens sit within a single black frame, with one displaying a digital instrument display and the other handling sat-nav and media like music etc. If you have a passion for cinema, one or both of the screens can be upgraded to 10.3-inch units.

For those into geek chic, the A-Class can be specified with a wi-fi hotspot, augmented reality sat-nav (watch the dramatic demonstration in the video above if not already) and live traffic updates – perfect for rush hour traffic on Trinity Way – through Mercedes’ new MBUX infotainment system.

Other upgrades available include a head-up display, traffic sign recognition and a Burmester stereo. There’s a touchpad on the centre console to control the system, whilst the infotainment screen is also touch-sensitive (see video) – a first for Mercedes.

This system has an advanced speech recognition system that operates in a similar way to Amazon’s Alexa smart assistant – but unfortunately it won’t boil the kettle at home for you. It works by saying “Hey Mercedes” followed by an instruction. It’s said to understand conversational language rather than specifically worded commands. So “Hey Mercedes, take me to intu Trafford Centre and don’t moan like my boyfriend does!” will do the trick. 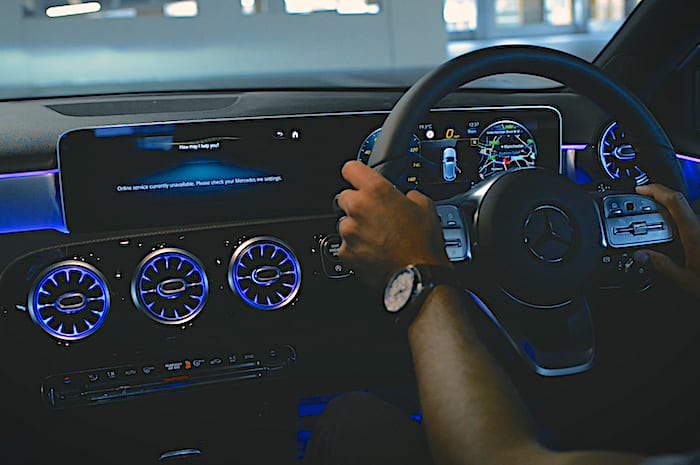 Other luxury touches include ambient interior lighting with 64 colour options to compliment your outfit and/or make-up.

There are three different engine sizes to choose from. The A200 has a turbocharged 1.4-litre petrol engine, the A250’s more powerful turbocharged 2.0-litre is the quickest model. Or be boring and go for the 1.5-litre diesel model.

We’re told that two Mercedes-AMG hot hatch versions of the A-Class will be introduced next year, both with four-wheel drive and a turbocharged 2.0-litre petrol engine. Calm down, dear.