Why the Pub is Still the Hub in Manchester

We like a bit of rumour, speculation and conjecture every now and again, and the appearance of @tapmanchester on Twitter has certainly caused plenty.

Wherever it ends up (my money would be on Victoria), it will be a welcome addition if it replicates Euston, Sheffield and York.

But it also got me to thinking, what is a pub these days? The industry has been through the mill in recent years, thanks to a combination of factors. Rising overheads, competition from supermarkets, recession and the squeeze on disposable income.

The model has undoubtedly changed – and so has the audience. In Manchester, it’s led to a wonderfully diverse pub scene, as the craft ale scene is gleefully embraced by a younger market – one which should hopefully sustain the pub trade and independent brewers for a long time. Still full of characters and five friends you can walk into.

Operators have started to find their niche within the new landscape – as have breweries. Even some of the bigger boys know it’s not just enough to pitch up in a city, sign a lease, deliver the barrels and squeeze your landlord.

They know that food can work in some places and not in others. And when punters do want feeding, a different audience will demand a different product. Identikit pub menus are becoming increasingly rare. Some, like Amber Taverns, cottoned on to the fact that a lot of their punters aren’t actually bothered about food – the trigger for such growth at some large chains – because that attracts families, and noise. Sometimes, men just want to go to the pub for a pint and some peace and quiet.

I listened to a conversation this week where one side put to the other that ‘the good old fashioned pub’ was dying in Manchester city centre as we move towards a bar and restaurant-led evening economy.

Tell that to the landlords of The Millstone in the Northern Quarter, or The City Arms off Fountain Street. Or the Pev, The Brits, The Rising Sun, The Eagle, The Castle, The Ox , The Black Lion, The Abercrombie et al. 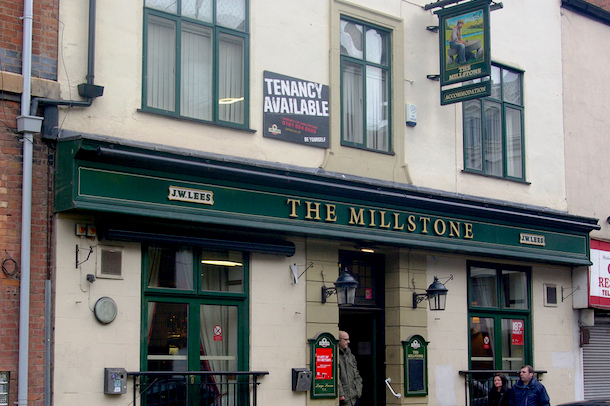 Manchester city centre still has plenty of survivors from the olden days of pubs, relying on a solid set of regulars and interested newbies to whom the ‘pub’ is a curious and exciting world previously unseen. The meal options there rely largely on the flavours of crisps available.

In some pubs, the food is king. Drive out to the Freemasons in Wiswell and you will see how ‘pub food’ can be when the shackles are off and preconceptions have a hammer taken to them. That pub serves food that many high end city centre restaurants would struggle to keep up with, and led to it being named the Best Pub in the UK in the recent Good Food Guide.

In the city centre, New Moon Pubs dropped their Beef and Pudding gastropub into the mix earlier this year – kitchen-led, but with no pressing requirement to eat.

Another example of the reinvented pub is The Gas Lamp. Underground but with proper pub furniture.

Venues like The Oast House play with the notion of traditional and modern across location and product – and that’s the key I suppose.

Everything – pubs included – have to be relevant to the market they serve in order to survive. But that doesn’t always mean being new.

So let’s remember to champion the traditional as well as the new. It adds to the diversity of our city centre.

One more before the train comes…?