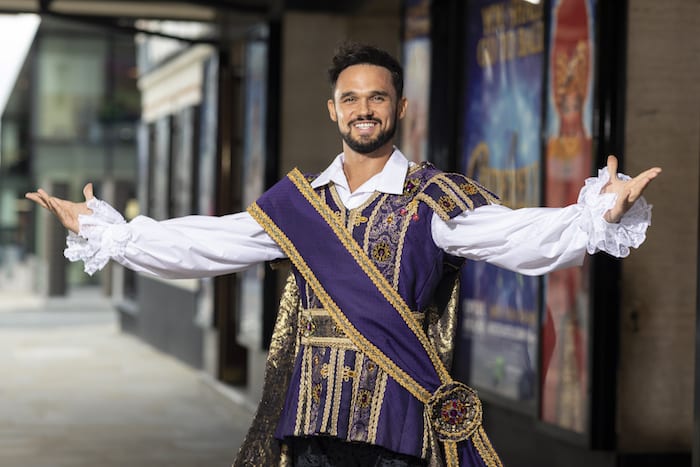 Playing Prince Charming in the Christmas pantomime Cinderella at the Opera House this year is singer, performer and part-time businessman, Gareth Gates.

Gareth first found fame on the inaugural Pop Idol in 2001, becoming a household name in one of TV’s most iconic and memorable finals, finishing as runner-up to Will Young.

He has gone on to have a lucrative career, selling over five million records worldwide. His version of Unchained Melody sold over a million copies in the UK, he was the youngest ever performer to get to number one with his debut single, and he is the third best-selling singer of the noughties.

Since then, he has worked in the West End in shows such as Legally Blonde, Les Misérables, and Joseph and the Amazing Technicolour Dreamcoat.

And he has performed in lots of places around the UK, but Cinderella will be his first panto in Manchester – and he’s delighted.

“It’s one of the biggest shows this Christmas and it’s great for me as I’m from Yorkshire, so it’s only an hour away. When I did panto in Belfast, that was the first time I’d been away from the family all Christmas and I hated it. As soon as they mentioned Manchester I jumped at the chance.

“This particular show is great. I did it the year before last in Belfast and it’s the exact same show. The production is great, they spend a lot of money on it and the script is fantastic as well because they cater for both kids and adults. I’m really looking forward to it.

“I really love playing Charming. I always end up with the girl at the end, which is nice. I get to deliver the slipper and I get to sing one of my own songs in the show. You’ll have to wait and see which one. And it’s just a really lovely role to play.

“At the end of act one, something magical happens that the kids absolutely love. When the fairy godmother turns the pumpkin into a horse and carriage, it floats out over the whole of the audience and all the kids go crazy for it.”

“I’ve actually known the two of them for a while but never actually worked with them before, so I’m really looking forward to working with them. I watched Les as a kid on Family Fortunes and I’m a massive fan of his role on Extras too – he was particularly funny in that. I can’t wait to share the stage with them.”

The day after Cinderella finishes, he is flying straight to Barbados.

“I’m doing lots of work on the ships next year. I have my own show on Britannia, one of P&O’s huge vessels. At the start of next year, I do a week on the ship, then I have a week at home and keep alternating.

“Pretty much the whole of next year is already booked for me so I’m really busy. I’ve only started with my own show on cruises this year actually. It’s hard to raise a daughter and be away six nights a week, so I thought I’d give the ships a chance and, you know what, it’s an amazing gig.”

And here’s something you probably didn’t know about Gareth.

Back in 2006, he developed his own coconut-based hot beverage brand, Cuppanut, after realising how popular coconut products were becoming.

“I discovered that it was something that could do really well – and after I did an interview with a food magazine, Holland and Barrett contacted me the next day. We’ve been in all of their stores for over two years now.

It’s also stocked by Marks and Spencer and recently launched with Ocado.

“I’ve got meetings over the next few weeks with some of the big supermarkets now – and we’re taking the brand into Europe too. To be able to walk into a shop and see a product that I created myself on the shelves is just an incredible feeling and I’m excited for the future of the brand.”