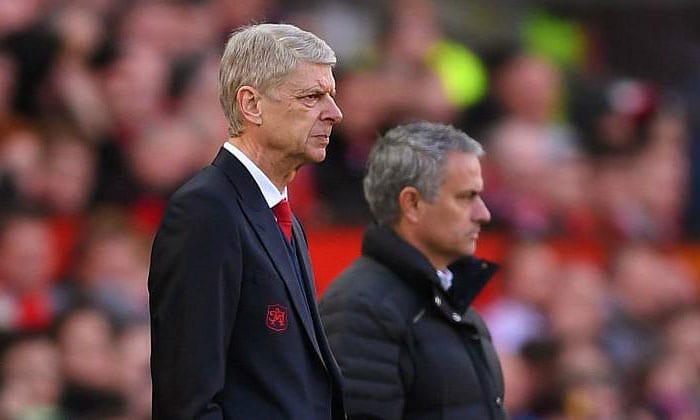 Arsene Wenger is back at Old Trafford on Sunday for the last time as Arsenal manager.

It won’t be the kind of bitterly contested game we saw so often when Sir Alex Ferguson was in charge. Because things are very different from when Wenger became Arsenal manager 22 years ago.

Sheffield Wednesday, Sunderland, Coventry, Blackburn Rovers, Wimbledon and Leeds (remember them?) were in the Premier League. Man City were in the Championship (the old first division) with Alan Ball as manager.

United’s domination of English football had already begun. They had won the double again the previous season, their third Premier League title in four years, beating Liverpool, white suits and all, in the FA Cup Final.

Arsenal finished third in Wenger’s first season in charge. United were champions. The following season, Arsenal beat United home and away and went on to win the double. United were runners-up.

The bitter rivalry between the two managers often spilled out on to the pitch and into the tunnel.

Wenger challenged United’s supremacy. According to Phil Neville in The Feud: Ferguson vs Wenger, a documentary on Channel 5 last night, Fergie was jealous of Wenger. He recognised that Arsenal were better than United and that United needed to improve.

They did and went on to win the treble the following year, beating Arsenal in what Phil Neville says he and his team mates reckon is the greatest game they ever played in.

But Arsenal weren’t finished.  In 2003-04, they won the Premier League without a single defeat and without spending hundreds of millions of pounds. The following year, they beat United on penalties in the FA Cup Final.

Wenger won some battles. But Fergie won the war. The leader of the pack saw off the young pretender.

When Wenger recently announced he would be leaving Arsenal in the summer, Fergie paid him the following tribute:

“I have great respect for him and for the job he has done at Arsenal,” he said.

“It is great testament to his talent, professionalism and determination that he has been able to dedicate 22 years of his life to a job that he loves. In an era where football managers sometimes only last one or two seasons, it shows what an achievement it is to serve that length of time at a club the size of Arsenal.

“I am pleased that he has announced he is leaving at this stage of the season, as he can now have the send-off that he truly deserves. He is, without doubt, one of the greatest Premier League managers and I am proud to have been a rival, a colleague and a friend to such a great man.”

Wenger has been given some stick by United fans over the years – some of it good-natured, some of it vile.

But they should give him a standing ovation when he returns to Old Trafford for the last time on Sunday.

Partly out of respect for a man who, as Fergie says, is one of the greatest Premier League managers, but also because they owe him a huge debt of gratitude.

Not just for providing the opponents in some of the most memorable games we have been privileged to see in the last 20 years – the match which ended The Invincibles’ 49 game unbeaten run; the 6-1; Pizzagate; the Champions League semi-finals; the 8-2.

Not just for Robin van Persie.

But because his arrival on the English football scene galvanised United into becoming better.

If it wasn’t for Wenger and his fierce rivalry with Ferguson, United may not have won the treble and gone on to dominate English football for as long as they did.