Late nineties and early noughties boy band heartthrob Ben Adams is back performing in Manchester for the next two-and-a-half weeks.

The last time he was here he was in Flashdance with Joanne Clifton. Now he’s back with the ex-Strictly pro in the UK tour of cult classic The Rocky Horror Show as Brad, an uptight all-American boy who discovers a completely different side to himself and his sexuality during the course of the show.

“I saw Rocky Horror about four years ago and I didn’t know anything about the show,” he told us. “My friend had some spare tickets so I just went along to fill a seat.

“But it was so inspiring, I loved it. The whole audience were all dressed up and were having the best time. The songs and performances were amazing, it was magical and I loved it so much that it inspired me to write my own musical, Eugenius.

“It really was an important piece of theatre for me. So when they offered me the role, I couldn’t say no.”

Ben starts out wearing a suit but by the end of the show he’s strutting around in high heels and stockings – and that’s exactly how he has been getting into character.

“I’ve just been wearing corsets around the house and high heels whenever I can,” he says. “I did Flashdance for 16 months with Joanne and then went on a tour with A1 so I didn’t have much preparation time really. 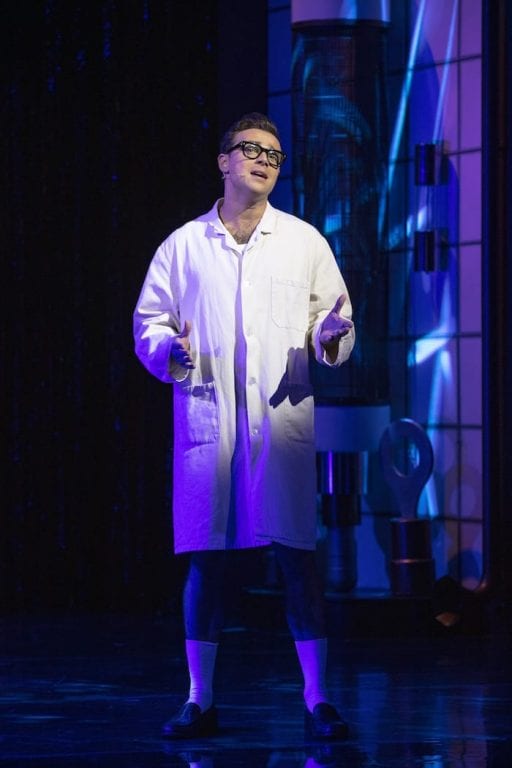 “What I love most about playing this character is he’s so different to my own personality and character that it was a real challenge to get into it – but I love it even more for that because I don’t think many people would imagine me in the role that I’m playing, so it’s part of the joy.”

Ben and Joanne have made history with this production. They have recorded a version of the song Dammit Janet – Ben’s favourite scene in the production – and have released it as an official soundtrack.

“It’s one of the first times it’s been allowed to be re-recorded since the original,” says Ben. “It comes quite early in the show and it’s a catchy fun song to perform.

“I take my studio around with me wherever we go so I said ‘Let’s just record a version and ask them if we’re allowed to use it’. They loved it so much they said ‘absolutely’ and then we created an official version, which is great.”

The production has a fantastic cast with Coronation Street’s Beverley Callard as The Narrator for the Manchester tour dates and Rocky Horror regular Kristian Lavercombe reprising his role as Riff Raff, with more than 1300 performances from various tours around the world under his belt.

“The other cast are amazing, we’ve all been getting on really well and love working together – and we’re very lucky to have received great reviews from the most hardcore of Rocky Horror fans.

“They’ve been raving about the show saying it’s the best cast they’ve ever seen, so that’s something good to go by. When actually hardcore fans of the show are giving you that kind of feedback it’s amazing.

“It’s literally one of the most fun nights out. It’s all about being yourself and the interaction with the audience. If you haven’t seen Rocky Horror then it’s an experience unlike any other – and if you have seen it then you know that your in for a good evening.

“As long as you know The Time Warp and come dressed up. 80% of the audience do dress up, so if you don’t you’re in the minority. It’s just a crazy and fun experience.”

And there’s some exciting news for A1 fans. The band is reforming for a 20th anniversary reunion.

“We’ve just done a big stadium tour in Asia and we’re going to be bringing it to the UK and Europe after May this year. So there will definitely be some A1 concerts and some new material as well in the middle of the year.”